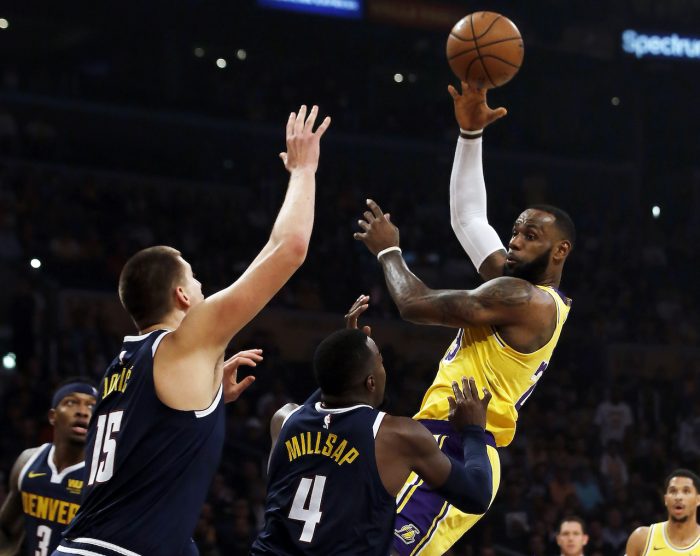 The electric atmosphere inside Staples Center continued as LeBron James earned his first triple-double as he led the Los Angeles Lakers to their first home win of the season against the Denver Nuggets with Laker great Kobe Bryant sitting court-side on Thursday.

“It’s my first triple-double as a Lakers and my first home win as a Laker,” started Lakers star forward LeBron James. “Any time you can do good things individually that results in a win, that’s what important to me. I think our crowd has been great in our home games and they were great again tonight.

James finished with 28 points, 11 rebounds, and 11 assists in Los Angeles’ 121-114 victory. It was a complete team effort with the team short-handed by the suspensions to Brandon Ingram and Rajon Rondo due to their involvement in the altercation that transpired against the Rockets.

“This is our fifth game together, so we’re still finding each other out,” Lakers point guard Lonzo Ball, who started for his second consecutive game in Rondo’s place, commented. Though Ball started out 0-4 from field goal range, he re-energized the team as he picked up Nuggets’ guard Jamal Murray full court in the second quarter, stole the ball and proceeded to score a layup.

“I thought that got him and our team going a little bit,” Walton started. “From that point on, on defense, he was causing havoc, getting his hands on balls, reading plays, coming in and rebounding.”

Ball added 12 points, nine assists and six rebounds to the Lakers win. He displayed a range of versatility totaling a game-high five steals on the night. 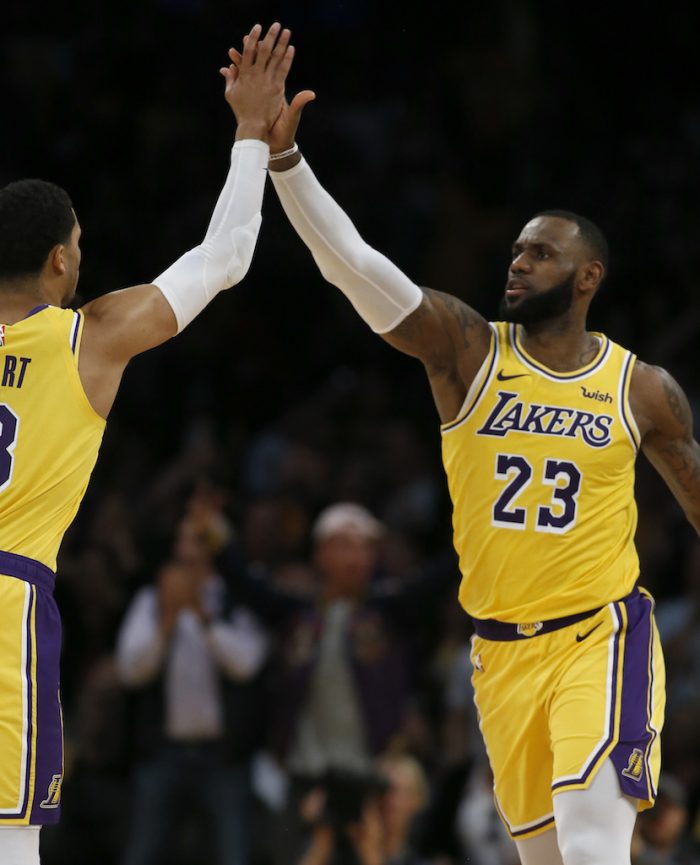 Counting down from the 10 second mark, James dribbled the ball up the court and elected to pass it to Lakers’ forward Kyle Kuzma with mere seconds left on the clock to close the first half. Swish. Kuzma, who was shifted to the starting lineup in place of Ingram, nailed the three-pointer to give the Lakers a one-point lead at halftime, 58-57.

Ahead of this match up, the Nuggets were one of five remaining undefeated NBA teams in the regular season. Nuggets big man Nikola Jokic presented the biggest problem for the Lakers. He scored 24 points with 11 rebounds on the night. While Jamal Murray tallied 22 points and 10 rebounds.

In the final quarter, Ball was given the assignment to defend Jokic. His defensive efforts continued in the game as he deflected a series of Jokic’s shot attempts.

“His instincts for the game when he’s aggressive and active, he changes games,” Walton commented on Ball’s performance.

Since Los Angeles was playing on a back-to-back night, Luke decided to restrict James’ minutes to ensure he was appropriately rested.

“If we were going to play fast, I need to find stretches to get him some breaks throughout the season,” Walton said. James recorded 34:40 minutes in the game.

Lance Stephenson notched 12 points off the bench with two back-to-back three-point baskets with 5:44 left in the fourth quarter. Stephenson made his presence felt on the court with one of his favorite players of all-time observing from a court-side seat.

Lance Stephenson (@StephensonLance) was “hyped” Kobe Bryant was there for the #Lakers first home win pic.twitter.com/bM2GOxAXJG

“That’s one of my favorite players, he told me ‘good game’ after the game so I was a little hyped,” Stephenson said emphatically.

All five of the Lakers starters, Lonzo Ball (12), Josh Hart (12), LeBron James (28), Kyle Kuzma (22), and JaVale McGee (21), scored in double figures. The Lakers have a two-game road stint before the team returns home to play the Dallas Mavericks on Halloween, Oct. 31. 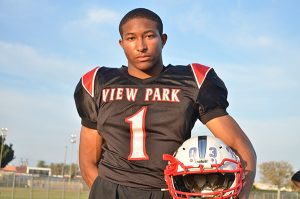