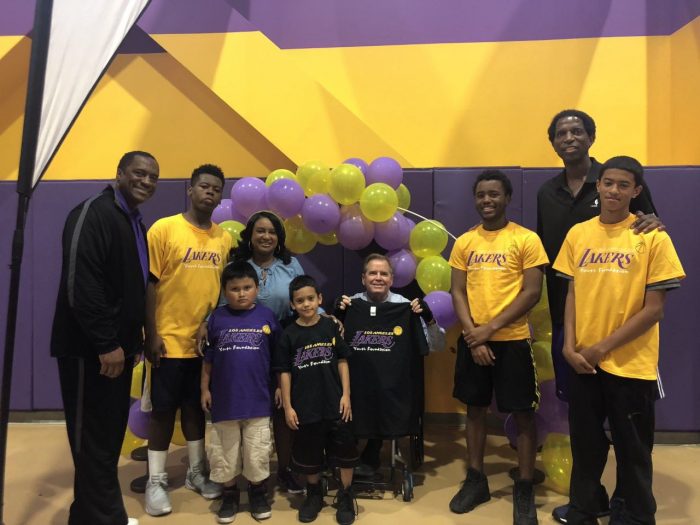 The Los Angeles Lakers Youth Foundation celebrated the unveiling of the newly renovated gymnasium at the Union Rescue Mission with a youth health and fitness clinic attended by former Laker, A.C. Green and the Laker Girls. The multipurpose gym in downtown Los Angeles’ Skid Row is not only used for recreation. At night, the space is a homeless shelter for 150 mothers and their children.

“We’re just minutes away from Staples Center and it really shows two opposite sides of the spectrum,” started Kiesha Nix, executive director of the Lakers Youth Foundation. “You have fame and fortune in the Staples Center and then you have people literally living on the street here, so this is just a small way that we can impact the community.”

The Union Rescue Mission is the largest private homeless shelter in the United States. Just outside its doors are sidewalks lined with makeshift tents, carts filled with recycled bottles and people’s personal belongings and other items used as improvised shelters.

Green has been a “longtime friend of the Union Rescue Mission” according to Rev. Andy Bales, CEO of URM. For 20 years, Green has taken kids from the mission to participate in his free annual summer basketball camp.

Dayton Rhodes, an eleventh grader at Cesar Chavez Learning Academies was one of the participants in the clinic. 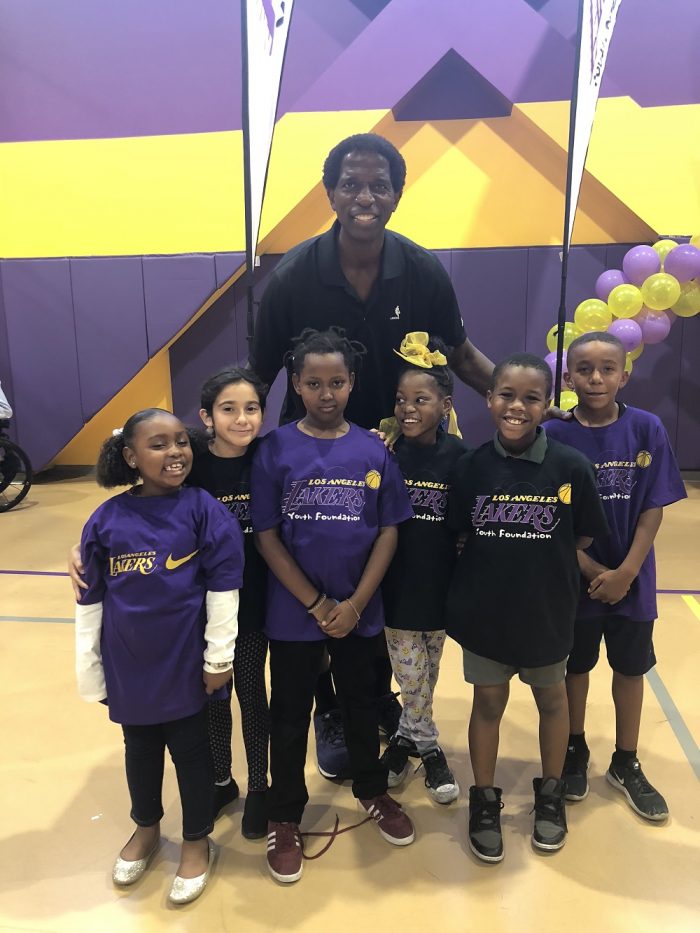 Laker alumnus A.C. Green and children from the Union Rescue Mission pose for a photo at the Lakers Youth Foundation court dedication in downtown Los Angeles on Saturday, Nov. 3. Photo by Lauren A. Jones/L.A. Sentinel

“It’s pretty cool, I’ve never really met a Laker before,” stated Rhodes, a 16-year-old multi-sport athlete. “[A.C.] was a nice dude, teaching us about a lot and telling us just don’t give up.”

URM is the one of the few rescue missions in Los Angeles that welcomes families. The children who participated in the health and fitness clinic and basketball drills were residents of the mission and from the Hope Gardens Family Center in Sylmar.

“You can see the impact on the kids,” Bales said. “They’re having the time of their lives during the toughest time perhaps in their life and it makes all the difference in the world. Just a little bit of hope can go a long way and we really are thankful for the Lakers for making that happen.”

“It just means a lot to see him come out here to the gym that the Lakers actually care about the community and that they’re willing to help out,” Walker remarked.

Following the ribbon cutting ceremony to celebrate the renovated gym, children participated in the health and fitness clinic with instruction from Lakers’ trainers. The gym received a full facelift from new floors and lights, to a fresh paint job. It was a three-year project that required hard work and patience. 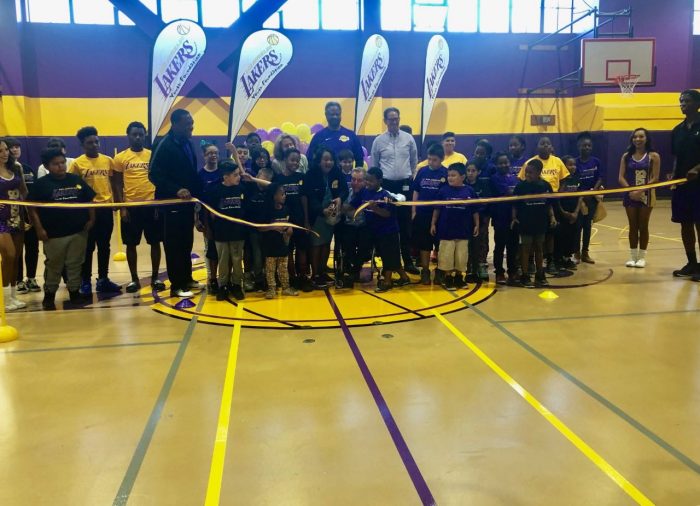 “It was one of the first projects that I was given when I started over three years ago,” Nix remembered. “When I walked in here, [there were] almost unlivable conditions.”

Of the 40 plus gymnasiums that the Lakers Foundation has restored since 1992, this was the first one that is also a homeless shelter.

Skid Row has a growing community of displaced families and individuals who are experiencing homelessness. Family homelessness has increased 111 percent since last year on Skid Row Bales shared.

“We have such an influx of families that are experiencing homelessness, we’ve had to make space for them to stay here,” commented Ken Taylor, Union Rescue Mission’s athletic director.

The alignment of the work that both the Union Rescue Mission is doing and that the Lakers Foundation continues to do by impacting underserved youth through education, health and wellness, and basketball.

“This is just a small step, but it’s not the last step,” Nix concluded. 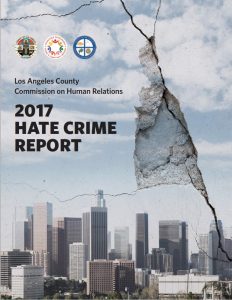 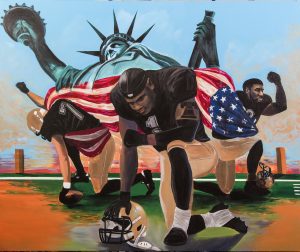