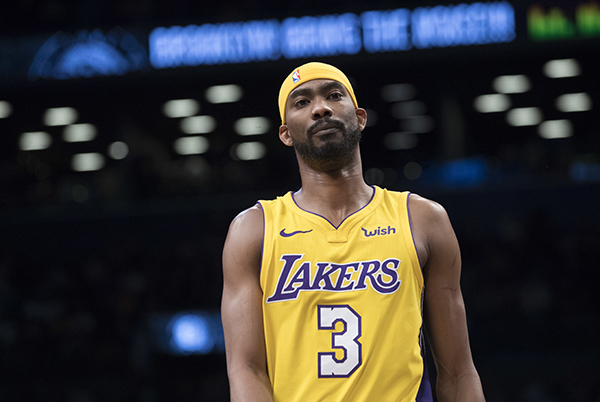 Los Angeles Lakers forward Corey Brewer pauses on the court during the second half of an NBA basketball game against the Brooklyn Nets, Friday, Feb. 2, 2018, in New York. The Lakers won 102-99. (AP Photo/Mary Altaffer)

The Los Angeles Lakers have requested waivers on Corey Brewer, it was announced Wednesday.
“It was a pleasure to have Corey on our team,” said Lakers General Manager Rob Pelinka. “Corey’s professionalism and competitive mindset will leave a positive mark on the Lakers for a long time. We appreciate his time with the team and wish him the best of luck for the remainder of his career.”
Brewer appeared in 54 games (two starts) for the Lakers this season, averaging 3.7 points and 1.7 rebounds in 12.9 minutes.
The Lakers roster stands at 15, including two two-way players.
ADVERTISEMENT
ADVERTISEMENT
Categories: Basketball | Sports
Tags: Basketball | Corey Brewer | Los Angeles Lakers | NBA