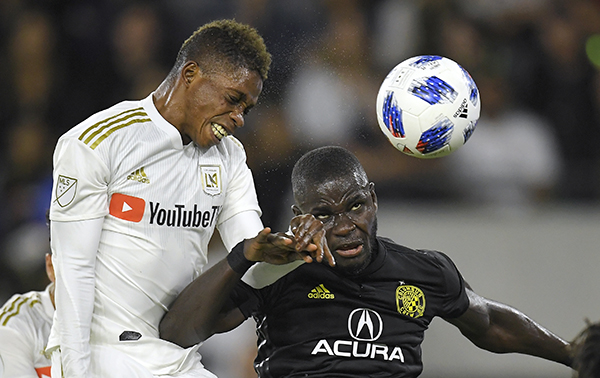 The Los Angeles Football Club have put themselves in a tough position. Out of their last six matches, LAFC have tied three, lost two and won one. The 2-1 loss at the hands of the Red Bulls this past weekend has dropped the squad from second to fourth place in the Western standings, with the Portland Timbers moving into second and Sporting Kansas City moving into third.

Things almost went sour in the first thirty seconds of the match, setting a bad precedent, when a pass from LAFC midfielder Benny Feilhaber went awry and picked up at the edge of the LAFC box by New York Red Bulls youngster Tyler Adams. Adams then threaded a pass into Daniel Royer, as Royer passed it off to Red Bulls striker Bradley Wright-Phillips, who made a quick turn and shot on goal that glanced just wide to the relief of LAFC keeper Tyler Miller and his defense.

In the eighth minute, New York Red Bulls defender Aaron Long missed a header attempt from the middle of the box. LAFC responded right away however, just a minute later with Diego Rossi, whose shot traveled tantalizingly into the hands of the Red Bulls keeper.

Throughout the first half, LAFC began to grow in confidence. Black and Gold winger Latif Blessing made himself a handful for the opposition’s defense as usual. In the 12th minute, Blessing won a free kick in the Red Bulls half but the ensuing shot on goal was not enough to challenge the goal.

In the 17th minute, LAFC defender Steven Beitashour made a strong run down the wing, crossing it into the Red Bulls box. The ball ultimately found the head of LAFC forward Adama Diomande who glanced his header just over the bar and out of danger.

Two minutes later in the 19th minute, Diomande almost had redemption when he made an impressive run into the box, passing it off to Diego Rossi who eked his shot just wide, keeping the score at 0-0.

LA had their best chance of the first half come off a Carlos Vela run into the edge of the box in the 36th minute. Vela was pushed off the ball but at the last moment, passed it off to Diego Rossi who quickly shot a curling attempt on goal, hitting the side post and narrowly missed breaking the deadlock.

In the 39th minute, it would be the Red Bulls to take the lead first when a routine cross was spilled by LAFC keeper Tyler Miller at the mouth of the goal right in the path of Red Bulls midfielder Daniel Royer who put it away from the ground to make it 1-0.

Things started to look better at the beginning of the second half for LAFC. In the 53rd minute, Carlos Vela threaded a perfect through ball into the feet of Diego Rossi who was making a run at the top of the Red Bulls box. With a good first touch on the ball, Rossi threw the Red Bulls defense off base and slipped it in past the keeper to put LAFC level even the score at 1-1.

For the next 20 minutes, neither team’s offense could convert their chances, with most of the possession battles occurring in the midfield. That was until the 80th minute, when a pass deep from the Red Bulls half found its mark in Red Bulls forward Bradley Wright-Phillips, who collected the ball with a calm first touch and found his teammate Daniel Royer making a run on the other side of the box to put it past Tyler Miller for his second of the game. LAFC was left scrambling for an equalizer for the remaining 10 minutes plus stoppage time. There would be no such luck for LAFC on the day.

LAFC now sit in fourth place behind Sporting Kansas City, who they play next on Saturday August 11th at 7:30 P.M.

LAFC have also recently announced the signing of striker Christian Ramirez from Minnesota United. Ramirez participated in the 5-1 rout of LAFC a few weeks back with a brace of goals in the contest. Now with an embarrassment of attacking riches, the Black and Gold are more dangerous than ever offensively. If they can manage to fill some of the gaps defensively, they will be a team that’s nearly impossible to beat.