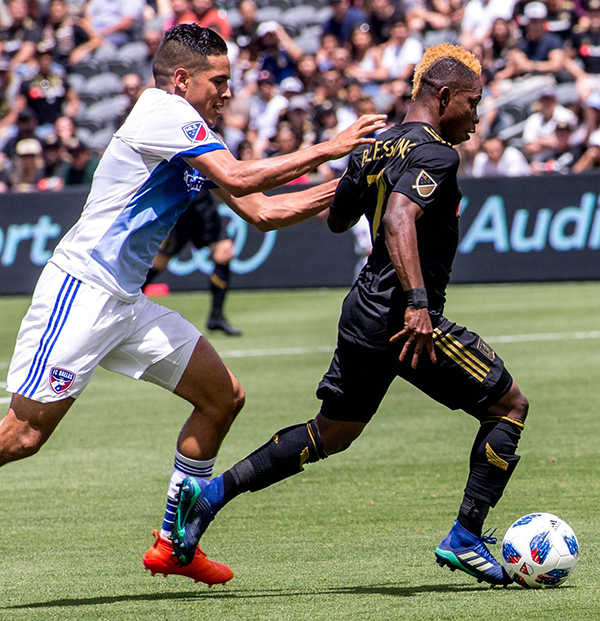 On Saturday, May 5, Los Angeles Football Club (LAFC) looked to improve on their previous performance, in which they barely scraped three points from the Seattle Sounders to improve their standings in the MLS table.  Ultimately, L.A.’s new team had to settle for a 1 – 1 tie against their opponent, Dallas FC.

The game started at a blistering pace, in keeping with the blistering heat of 82 degrees at kickoff. LAFC were on the front foot early, as they continued to attack in FC Dallas’ final third, using the wide-open spaces on the flanks. In the ninth minute, LAFC sprayed the ball to the right wing and LAFC right-back and Iranian International Steven Beitashour capitalized on Dallas’ lack of awareness of the open space behind them as he pounced with a clinical, striker-esque finish. Dallas struggled to keep possession due to LAFC’s ability to win the second ball and keep possession in the midfield.

LAFC continued to dominate the game throughout the early stages even after their goal, as FC Dallas found it difficult to cope with LAFC’s potent attack of Diego Rossi (Uruguay), Carlos Vela (Mexico) and Latif Blessing (Ghana).  However, the Black and Gold attack found it difficult to finish off their opponent, with chance after chance narrowly missing the back of the net.

L.A.’s inability to cap off the attempts on goal allowed Dallas to slowly but surely grow in confidence. Laurent Ciman, the goal scoring hero of last game, now became the defensive hero, making an epic goal saving clearance that would have seen the two clubs flushed even.

LAFC continued to advance with their incessant attacking presence, producing yet even more chances. LAFC’s attacking formation morphed and changed throughout the game with Blessing and Rossi shifting from wing to wing, most likely to keep FC Dallas’ defense incognizant. In 33rd minute, due to the heat, the referee stopped the game for a water break, a rule that was recently adopted into the league to compensate high game time temperatures. 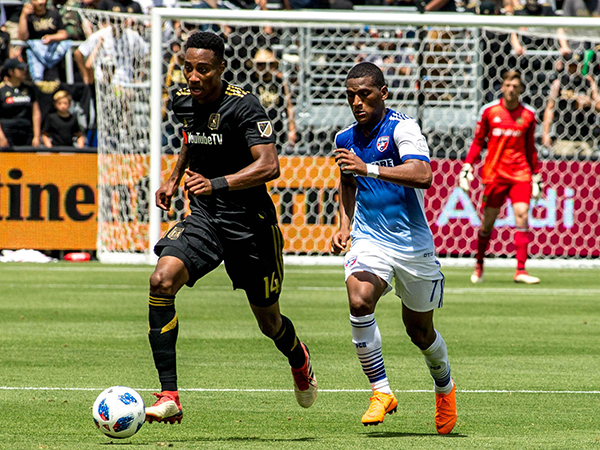 At halftime, the fans were treated to a Metro commercial featuring Ghanaian International and LAFC winger Latif Blessing, showcasing his various skills with the ball in the advert.

In the second half, LAFC’s attack started right where it finished in the first half, but the inability to finish in the final third eventually came back to haunt them as FC Dallas leveled the scoring in the 55th minute with a precision blast from 30 yards out, dissecting its way through the LAFC defense. Egyptian international star Omar Gaber came on for Blessing in the 68th minute, hoping to add some fresh legs and defensive stability. LA maintained possession in the midfield throughout most the second half, but were hindered by FC Dallas’ strategy to play for the draw as nearly all 11 players for FC Dallas were behind their own midfield line.

As the game clock dwindled down the crowd tried to inject some life into their home team and the “L-A-F-C” chant could be heard around the entire stadium in the final minutes of the game.

The chants nearly worked when Carlos Vela almost finished the game off in stoppage time in spectacular fashion but sent the ball barely wide of the net. 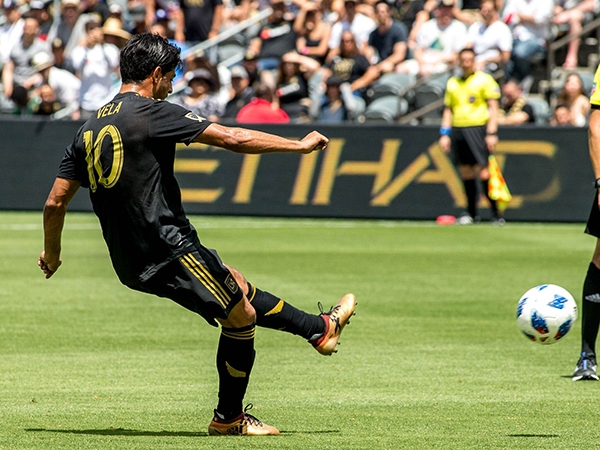 Carlos Vela strikes the ball barely wide in a last-ditch attempt on goal with minutes left in the game. (Photo by Robert Torrence)

“Overall, we had a good start, good first half, scored a really good goal,” said LAFC Coach Bob Bradley. “But the reminder at halftime is that it’s only one-zero, and now there’s this whole part of how do we finish games, and we started the second half with two really good chances. There were some moments in the second half where [we were] a little slower with the ball which turned into some counter [attacks] for them.”

“I think we are improving in all ways,” continued Bradley.  “You know I’ve talked earlier that the days where we gave up goals, we went back and looked at some of those goals, they came in all sorts of odd ways for the most part and so I never saw it [LAFC defense] as being a major issue how we defend.”

LAFC star Carlos Vela agreed with his coach. “This team plays really well, tries to play well, tries to be an attacking team, score goals, a lot of players in the box. We try of course, not every day we are on a good day and we score all the goals–but I think it’s a good way, it’s the way we want to play.”