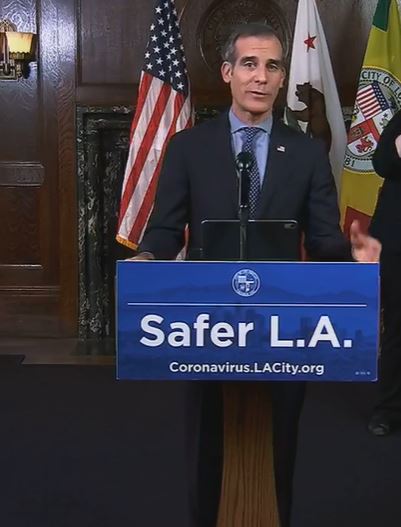 The mayor of Los Angeles City Mayor Eric Garcetti shared important news behind the COVID-19 outbreak. Community Transmission is gradually declining, but still not in a place of security. Garcetti explained the new innovations to testing that are looking to prevent the spread of the virus and provide more information about the contagious enemy that the city is facing.

The mayor stressed the continual perseverance the city needs to have to fight COVID-19. Garcetti reflected on the work the city has put in to prevent the spread and stated, “From the very beginning of this crisis, I am proud that you have led. You have led in your actions, and collectively this city has been a leader to this nation.”  The mayor emphasized Los Angeles has been following science and data, being the first in the nation to shut down places where people gather.

Garcetti mentioned that Los Angeles is seeing fewer infections, hospitalizations, and deaths in comparison to other cities in the nation. He emphasized that L.A. County is the largest county in population, but the county stands at 179 in per capita in infections and 154 in per capita in deaths.

The success comes from the sacrifices made from every Angeleno; the mayor shared that this week the city will continue to strive to support the residents that are seeing some of their darkest days. Garcetti announced a new city initiative, the plan is to deliver relief to those who are suffering from the abrupt economic downturn the world is seeing.

Starting next Monday, low income residents can apply for the DWP Utilities CARES Grant. According to the LADWP official website, “Low-Income LA Residents Affected by COVID Pandemic Can Apply for $500 Grant between November 2 – 15, under Program Championed by Council President Nury Martinez and Approved by City Council & Board of Water & Power Commissioners” That took place on October 27.

Garcetti stated, “Our COVID-19 response has focused on two core tenets — saving lives and protecting livelihoods — and we will continue to do everything in our power to help our hardest-hit Angelenos get back on their feet,” He continued, “With leadership from the City Council and DWP, we are investing in a fairer, stronger city by directing vital funds where they can do the most good: helping struggling households cover their bills, make ends meet, and endure this moment of unprecedented challenge.”

To quote the Board of Water and Power Commission President Cynthia McClain-Hill, she stated, “ COVID-19 has not only resulted in an unprecedented global health crisis, but it has also led to an extraordinary economic crisis as well for many families,”  McClain-Hill continued, “We look forward to providing these $500 grants to Angelenos to assist our most vulnerable residents during this crisis.”

Residents must meet the household income eligibility requirement and be able to provide records of COVID-19 impacting their financial stand.  Open enrollment starts November 2 and lasts through November 15.  Grant award checks will be mailed out by December 30, 2020. The financial assistance is looking to cover Wi-Fi, cell phone bills, internet, and television.

The goal for the grant is to communicate to Angelenos that they are not being forgotten, the mayor stressed the division in the nation and Capitol Hill is delaying the process for assistance to the people who need immediate assistance.

Additionally, Garcetti announced a new rapid Antigen program earlier this week, the very first in the country. Garcetti mentioned this is a critical step forward in the effort to track, trace, and prevent the virus from spreading so rapidly. The first among Los Angeles to receive the test, are firefighters and school faculty and staff. The mayor shared that these tests deliver quick results. This will be able to track transmissions and outbreaks earlier, which will strengthen the efforts of bending the curve.