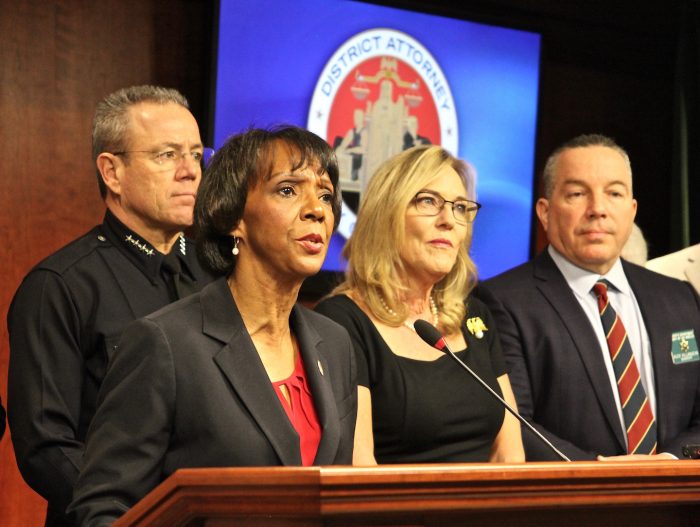 Los Angeles County District Attorney Jackie Lacey  announced the launch of a mental health division — the first of its kind by a prosecutor’s office in California and possibly the nation — to seek opportunities to expand treatment and other services for mentally ill inmates in the criminal justice system.

“Obviously, with some of the people who are mentally ill … those folks have to be in a secure setting such as a jail and receive their treatment there because they are dangerous. But there are a number of people in a number of cases that we have encountered where they do not display those violent tendencies,” the county’s top prosecutor said.

“I want to assure the public that we are not talking about releasing people who have hurt someone or who have those indicators that they are a danger to the public …,” she said. “There are some people we can safely divert into hospital settings and community settings and still restore them to competency, connect them with services and they can go on their way and be well.”

The district attorney noted that she doesn’t want to be asked to divert cases involving serial killings, but said she believes there are lower- level cases that would be eligible.

The new division will work with defendants who have been declared mentally incompetent to stand trial or who are seeking alternative sentences due to their mental illnesses, according to the District Attorney’s Office.

Prosecutors will be encouraged to “make courageous decisions and do the right thing,” Lacey said.

“It can be scary for a prosecutor. We take an oath to protect our community and no one wants to be the one whose decision leads to heartache for another family,” she said. “There are no guarantees, but we must be willing to make informed decisions to ensure that public safety is first and that we also help another human being who may be in crisis.”

Supervisor Janice Hahn — who called it an “historic day” for the District Attorney’s Office — said prosecutors working in the newly created division will undergo training from the county’s Department of Mental Health on the intricacies of working with people who are living with mental illness.

Supervisor Hilda Solis lauded the district attorney for taking “the courageous but necessary steps to help the county move in a more positive and supportive direction and to affirmatively say that our jails and our criminal justice system should be reserved for those who commit the most serious and violent offenses,” while Supervisor Kathryn Barger said it will serve as a role model for other prosecutors’ offices throughout the country and “ultimately ensures that we have the capacity we need to detain the most serious and violent offenders.”