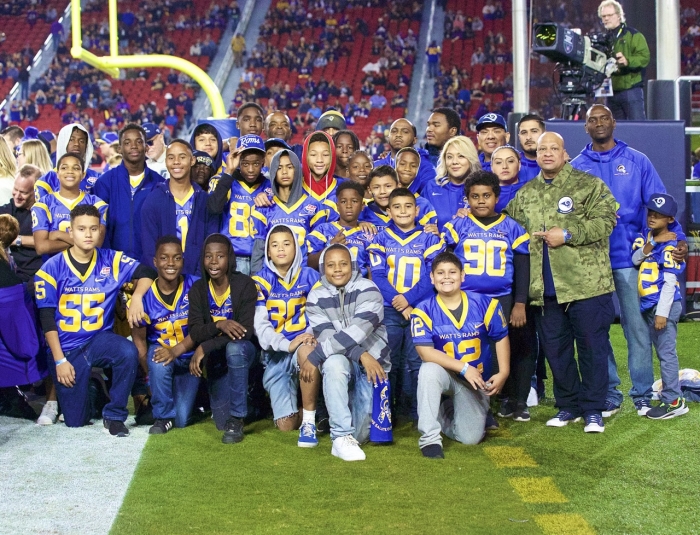 The Watts Rams players and coaches were invited to the Rams vs Ravens game (E. Mesiyah McGinnis/L.A. Sentinel)

During their time in Los Angeles, the Rams have developed a strong relationship with youth football program the Watts Bears, so much so they changed their name to the Watts Rams earlier this year.

During their Monday Night Football game against the Baltimore Ravens, the Rams partnered with TBWA\Chiat\Day Los Angeles (Chiat) and Albertson/Vons/Pavilions (AVP) to debut “What’s Watts – A Story of Transformation,” a short film that shows the development of the Watts Rams.

“It’s a beautiful video, it shows our story in a two-minute span,” Thompson said. “It took two weeks to shoot, it was a great experience for the kids.”

The film showed how the Watts Rams were created to help build a bond between residents and police officers. Record producer and Watts native, Brandon “Stix” Salaam-Bailey was the narrator of the film.

“When the Watts LAPD decided to join forces with the local community to create a youth football team back in 2012, they started to change the narrative around the city of Watts,” said Renato Fernandez Chief Creative Officer of TBWA\Chiat\Day LA. “The Watts Rams have sent a powerful, inspiring message that we hope our film captures and spreads across America and around the globe.”

Through the years, their partnership with the Rams further helped the organization achieve their goal of mentoring youth. The Rams and AVP recently held a Thanksgiving dinner for the program at Dymally High School. The Rams rookies, including Taylor Rapp, Darrel Henderson Jr., and Marquise Copeland, attended the event.

“The idea behind that is Thanksgiving is a time to give thanks and celebrate family and the Watts Rams have become our family,” said Molly Higgins, the L.A. Rams vice president of Community Affairs and Engagement. “It was important that we brought our players to Watts so they could really be in the community and share a meal and break bread.”

AVP also gave each player a $500 gift card and two tickets to the Rams vs Ravens game. At the Monday Night Football showdown, the Watts Bears were able to stand with the L.A. Rams during the National Anthem.

“The best part of it is they get to see guys that they’re dreaming about, guys that they’re wearing their jerseys,” Thomspon said. “They get to talk to players who went to school, did the right thing, stayed the course, stayed out of trouble, so they have real life role models.”