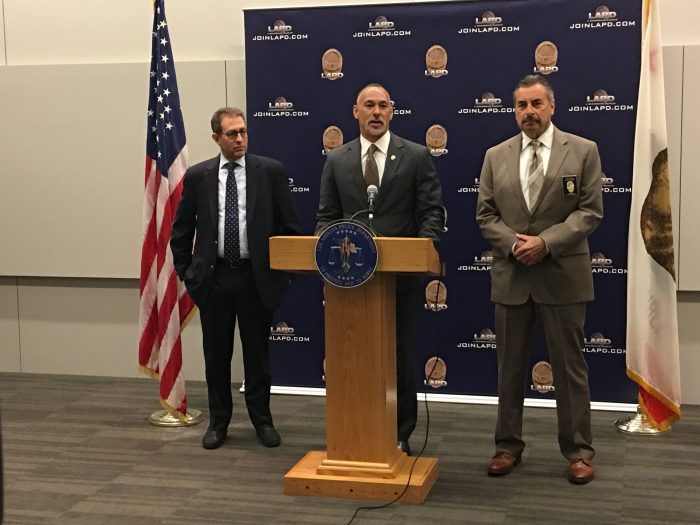 The public is specifically being asked to help decide:  1) what should happen if a police officer’s body-worn camera records an officer-involved shooting or other serious use of force incident; 2) should the video be made public; and, 3) if so, when?

The first of four scheduled sessions kicked off on the evening of March 23, the same day Police Commission president Matthew Johnson detailed plans during a press conference at LAPD headquarters.

Johnson began by stating increasing accountability and transparency were his top goals as president.

“Our current policy as it relates to the release of the footage captured by these cameras provides that we do not release the footage absent a court order or a significant public safety issue,” Johnson said.  Now, they’re evaluating that policy with the community’s help, he went on.

“Why the public input? Why not just release the tapes in full transparency – all of them,” this writer asked Johnson and Beck during a Q&A concluding the media event. Johnson replied he felt there should be a well thought out policy that takes into consideration all of the competing interests.

“We’re talking to everybody that we possibly can, and right now the focus is just getting that outreach, getting out to people and letting them know they can participate,” Friedman added.

According to the Policing Project, people can also participate via online LAPD Video Policy Questionnaires available in English and Spanish at www.LAPDVideoPolicy.org.  Paper copies will be provided upon request, and there will be focus groups to gather the view of LAPD officers and command staff.

The public comment period ends on May 7, and the Policing Project plans to issue a report on feedback in June.  Johnson said he hopes the  Commission will have a draft policy 60 days after, a comment period on that draft, and then be able to vote on a final policy.

Beck labeled the issue a balance of competing interests or stakeholders, such as rank-and-file police officers, command staff, the district attorney, victims’ rights groups, and many more.

He stated the media has tremendous interest in the topic because it fills airwaves and newspapers, and is of great interest to their reading and viewing public.  “And we think that’s important, but we also respect victims’ rights.  We also believe in due process, and we don’t want to affect due process, so we want to make sure that we hear from everybody,” Beck said.

Maybe the fantastic technology could be used to build community trust and not only increase transparency, he added.

Jody Armour, USC Roy P. Crocker Professor of Law, told the Sentinel the LAPD shouldn’t be requesting a kind of referendum or popular vote on the release of body camera footage.

It should strive to promote transparency and accountability by releasing such footage when incidents arise, not because doing so is popular, but because it’s right, he argued.

“Police should release such footage because in many minority communities, there is a crisis of confidence in police departments, a crisis that strikes at the very heart and soul of the moral credibility and moral legitimacy of law enforcement, a crisis that can only be addressed by greater transparency and accountability, not by public relations stunts or popular votes on whether there should be greater transparency in police departments,” said Armour.