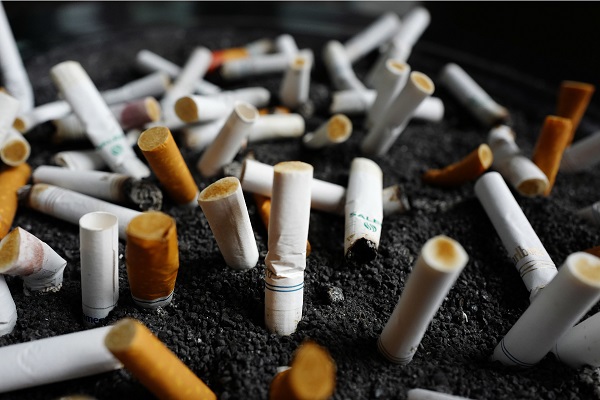 FILE – This Friday, April 7, 2017, file photo, shows cigarette butts discarded in an ashtray outside a New York office building. Decades after they were banned from the airwaves, Big Tobacco companies are returning to prime-time television, but not by choice. Under court order, the tobacco industry for the first time will be forced to advertise the deadly, addictive effects of smoking, more than 11 years after a judge ruled that the companies had misled the public about the dangers of cigarettes. (AP Photo/Mark Lennihan, File)

The Los Angeles County Board of Supervisors voted today to expand prohibitions on smoking on county property and in and around bars and restaurants in unincorporated areas, also making clear that smoking includes e-cigarettes and cannabis.

The ordinance will come back to the board for a second vote at a future meeting and then, if adopted, take effect 30 days later.

Supervisor Sheila Kuehl, who championed the effort to update county codes, said the ordinance was written to cover yet-to-be-developed technologies that deliver nicotine, cannabis or tobacco.

“Rules regarding cigarettes and cigarette-like products have not been significantly updated in a very long time. No doubt, future entrepreneurs will invent new ways to smoke, and, rather than specifically update our ordinances each time, we have written this ordinance so that the rules protecting public health should not need updating again,” Kuehl said.

The ordinance aims to reduce exposure to secondhand smoke, which is implicated in the deaths of 41,000 Americans annually, said Director of Public Health Barbara Ferrer.

In unincorporated areas, the ordinance would prohibit smoking on public beaches, in public elevators, at bus stops, in museums and libraries and the public areas of theaters. The ban would also apply within 25 feet of outdoor seating areas of bars and restaurants.

Smoking would also be banned at all county parks with exceptions for actors and models during production.

The no smoking zone would extend 50 feet from the entrance of any county building, in county parking facilities and at the driving range or outdoor eating areas of all county golf courses. All county vehicles would be non-smoking.