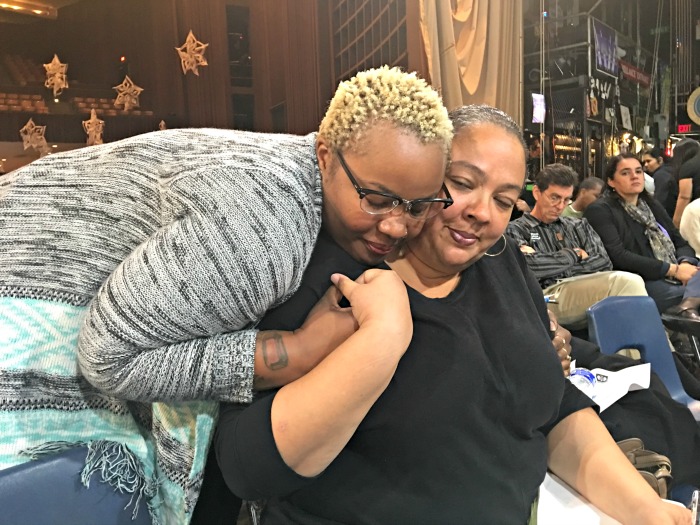 Community organizer Amber Rose Howard of A New Way of Life Reentry Project comforts organizer Dawn Modkins after her tearful testimony about the far-reaching impact police killings have on victims’ families and their communities.

A cross-section of Los Angeles County residents from various ethnic, age, and gender backgrounds met in Long Beach to give Human Relations commissioners compelling accounts about their strained encounters with law enforcement.

The citizens’ testimonies came during the third of five hearings the L.A. County Commission on Human Relations held as part of a countywide Policing and Human Relations Project.

“We’re here today, because we want to hear from all of you,” Commissioner Isabelle Gunning, Esq. told community members who gathered in the Jordan High School Auditorium on Dec. 3.

She explained the commission’s role is fact-finding and making recommendations to County Supervisors and other agencies. Although they desired it, they lacked the authority to force any action,” Gunning stated.

“We’re really relying on all of you to take the kind of concern and interest that you’re embarking on this morning to continue to put the pressure on authorities about whatever recommendations that come from you through us to them,” Gunning continued.

Law students working in conjunction with the National Lawyers Guild were on hand to assist individuals with individual cases.

She said it was important law enforcement wasn’t invited, so the community would have a space to safely share their stories.

The first speaker said she hoped the day was the beginning of salvaging dignity for all. One problem in policing is the narrative or marketing tool that works against transparency, she said.

People are tasked to get transparency, because law enforcement can’t talk about cases or share personnel records, she noted.

She said she understands very much the need to keep personnel records private, but misconduct happens.

Alicia Morales, lead organizer with the Long Beach Immigrant Rights Coalition, spoke for herself and on behalf of the undocumented immigrant community. 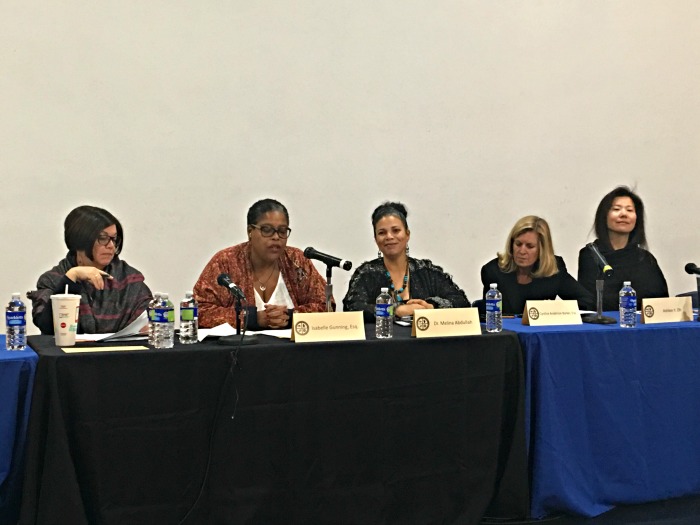 One half of L.A. County Human Relations Commission during hearings on policing at Jordan High School in Long Beach

She shared the conversation around the topic has changed lately, given the election of Donald Trump as president. She stated his “disgusting remarks of how he would deport millions upon millions of undocumented immigrants has questioned their safety and what lies ahead” for them.

Dawn Modkins, an organizer who works with Black Lives Matter Long Beach and other efforts, spoke from the perspective of families impacted by police killings.

As she called the names of police shooting victims and detailed the trauma their families suffer, the toll her work has taken on her own mind, body and soul became evident.

Through tears, Modkins continued to ensure her community’s experiences made it into the Commissioners’ record. She wanted the impact that being complacent as local government has on her entire community recorded, she said.

She recommended transformative justice by moving some of the exorbitant resources from police budgets to pay for more school counselors who would support, understand, and engage all challenges children have in schools.

“We don’t have that anymore … priorities shifted from prevention and really getting at what our youth challenges are to criminalizing and jailing them,” Modkins said.

Speaker-after-speaker detailed their stories of experiences with police misconduct, from allegations of illegal towing, harassment, unlawful detainment, and illegal surveillance, during the three-hour session.

The public hearings were announced in recognition of the 50th Anniversary of the 1965 Watts Rebellion and the strained relations between law enforcement and local communities that precipitated these events, according to county representatives.

The next hearing is scheduled for Jan. 28, 2017 at the Watts Labor Community Action Committee. The fifth will occur in the remaining Supervisorial District of L.A. County, in February, and a final hearing is planned in order to hear from law enforcement.

The results of the hearings will be compiled into a report complete with recommendations.