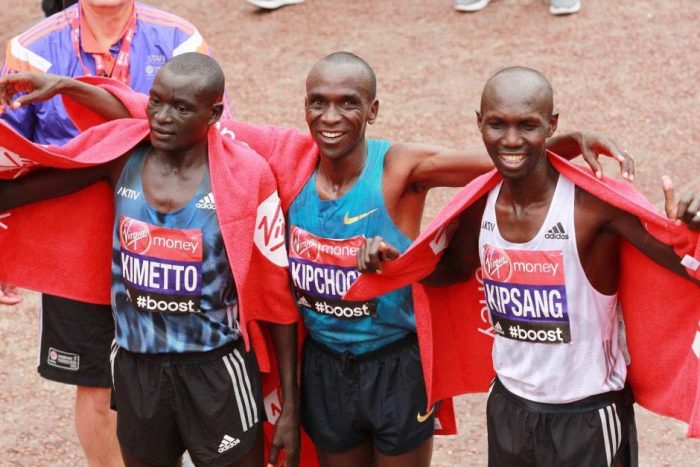 The fastest man in the world – Kenyan track star Eliud Kipchoge – not only held onto his title but broke his own record at the Marathon held this week in Berlin.

Kipchoge smashed the previous world record by compatriot Dennis Kimetto by a massive one minutes and 16 seconds, clocking 2 hours, 01 minute and 39 seconds , setting a new world record and cutting his own personal best by well over a minute. The 33-year-old had won twice before in Berlin.

For a man who has the world at his feet, wrote the Kenyan paper Standard Media, Eliud Kipchoge is not your ordinary celebrity.

At his Kapsisiywa village in Nandi County, Kipchoge loves herding cattle. He also likes joining in the banter at the shopping center when he is not at the training camp.

He is also frequently seen in Eldoret, where he lives at the upmarket Elgon View Estate, and his humility is noticeable.

He said he did not see why money should change the character of an athlete who has won half a million dollars. “An athlete with that much in his bank account can brag, but the uneducated farmer who uses the same amount to plant wheat in one season is not even noticed as he walks in town,” he said.

At the training camp in Kaptagat, Kipchoge joins fellow athletes – some of them low-profile runners – in the daily cleaning routine, including toilets.

“It was a performance so far superior to anything we’ve seen before that comparing it to another marathon feels inadequate,” the running-news website LetsRun.com said of Kipchoge’s new record. “This was Wilt Chamberlain’s 100-point game in basketball, Usain Bolt’s 9.58 in the 100-meter dash.”

“Kipchoge’s run was so remarkable it’s hard to give it its proper due,” said LetsRun.com. “In today’s age of hyperbole, this run deserves every accolade said about it. The lower the world record gets, the harder it is to be broken, and the less it should be broken by. Yet Eliud Kipchoge just broke the world record by more than any man in the last 41 years, and he ran the last 10 miles by himself.”

In a recent profile in The New York Times, Scott Cacciola called Kipchoge a “philosopher-king of marathons” who has been quoted to say: ‘Only the disciplined ones in life are free. If you are undisciplined, you are a slave to your moods and your passions.’ And: ‘It’s not about the legs; it’s about the heart and the mind.’

Kipchoge said modestly: “I am really grateful, happy to smash the world record.”

Kipchoge will receive $139,614 for his performance on Sunday, which includes a bonus for keeping his time below two hours and four minutes.

He holds a diploma in human resource management and plans to join university. He is a dairy and tea farmer as well as a real estate investor.