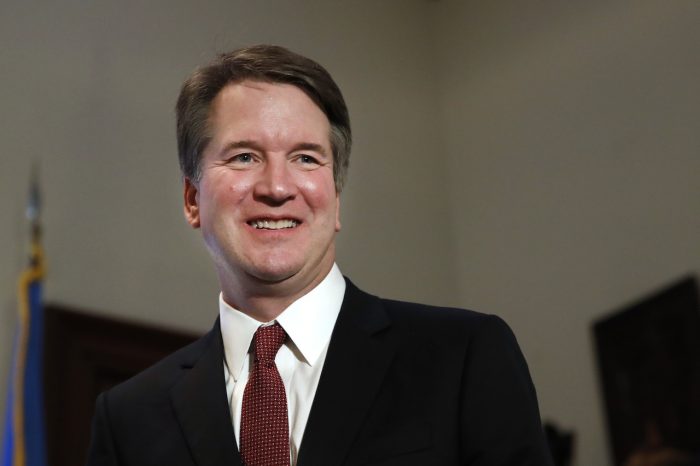 Brett Kavanaugh emailed his White House colleagues in June 2003 with an alert: The U.S. Supreme Court was about to release opinions on the University of Michigan’s use of race as a factor to admit students.

It was an issue of great interest to his boss, President George W. Bush who favored race-neutral admissions. Staff prepared a response anticipating the practice would be struck down, saying, “We must be ever mindful not to use means that create another wrong and thus perpetuate our divisions” in the pursuit of diversity.

But the next day, justices released a 5-4 opinion written by Justice Sandra Day O’Connor upholding the university’s law school admissions policy, a disappointment that prompted then-Bush policy adviser Joel Kaplan to email Kavanaugh, then a White House attorney: “What’s going on???” In a separate 6-3 opinion, the court said race could be a factor in undergraduate admissions, but not the deciding factor.

There is no evidence of a reply from Kavanaugh from his time in the White House counsel’s office.

But as President Donald Trump’s nominee to the Supreme Court, his views on affirmative action, along with voting rights and discrimination, are coming under intense scrutiny by civil rights organizations as the Senate Judiciary Committee prepares to begin confirmation hearings Tuesday.

“We are confident that if he’s confirmed to the court, he would undermine the court’s integrity and would prove a grave threat to civil rights, racial justice and the marginalized communities that the Legal Defense Fund represents,” Janai Nelson, associate director-counsel of the NAACP Legal Defense Fund, said Thursday as the organization announced opposition to Kavanaugh’s nomination.

Civil rights organizations that have been combing through Kavanaugh’s 300-plus decisions during 12 years as a federal appeals court judge in Washington, D.C., his work as a lawyer and his time inside Bush’s White House say there are red flags. He co-wrote a brief as a private attorney in a case involving native Hawaiians that they fear signals his personal opposition to affirmative action, and he wrote the appellate court opinion upholding South Carolina’s voter ID law.

Kavanaugh’s record also includes opinions that civil rights advocates would praise in other candidates, including that a single utterance of a racial epithet toward a black employee _ a word Kavanaugh said was “probably the most offensive word in English” could create a hostile work environment under federal law, and a suggestion that federal courts should make it clear that discriminatory actions by employers violate the Civil Rights Act.

That contrasting record underscores the challenge facing groups that already opposed Kavanaugh because he was on a list of potential nominees put forward by the conservative Federalist Society and Heritage Foundation, essentially certifying them as appropriately conservative for Trump. The president has vowed to move the high court to the right while replacing retired Justice Anthony Kennedy.

The White House had no comment for this story but referred The Associated Press to a former Kavanaugh law clerk, an African American, who said Kavanaugh is attuned to civil rights and racial justice issues.

Luke McCloud, who clerked for Kavanaugh from 2013 to 2014 and is now in private practice, praised Kavanaugh’s efforts to recruit and mentor minority lawyers, saying Kavanaugh “acknowledges the history and current reality of race in this country and takes it into account as he can within the confines of his role as a judge.”

Kavanaugh’s keen interest in affirmative action is evident in the released White House emails. Although he appeared careful to withhold his own opinion, he clearly was interested in Bush’s anti-affirmative action views, often emailing and receiving articles and opinion pieces on the issue.

In private practice earlier, Kavanaugh wrote a brief along with failed Supreme Court nominee Robert Bork challenging a law banning non-native Hawaiians from voting in Office of Hawaiian Affairs elections. He also wrote an opinion piece for The Wall Street Journal sharply criticizing the policy, but during confirmation hearings for the appeals court post, he said he wrote the piece to advance his client’s position and refused to say whether he agreed.

The case involved a $300 million public trust fund set up by Congress to compensate ancestors of native Hawaiians whose land and cultural heritage were taken by the U.S. The state said only blood relatives could vote in board of trustees elections, while Kavanaugh challenged that as discriminatory to non-indigenous residents. The U.S. Supreme Court ruled in 2000 that the law amounted to racial discrimination.

Kavanaugh’s brief and other comments around the case indicate that he thinks government will ultimately end up race-blind, which “could signal where his own thinking is” on affirmative action, said Vanita Gupta, president and CEO of The Leadership Conference on Civil and Human Rights, who also opposes Kavanaugh. “His record is deeply disturbing … but there is a lot we don’t know.”

Opponents point to other issues that trouble them, especially his 2012 ruling on South Carolina’s voter ID law. Kavanaugh said the statute was legal because those who had difficulty getting a photo ID still could vote by signing an affidavit. The law had been blocked by the Justice Department, which sided with those who said such laws make it more difficult for minorities to vote and are pushed by conservatives to dampen minority turnout.

But Kavanaugh also delayed the law’s implementation to give voters who lacked ID’s time to get them, acknowledging that most were black, and writing: “There is too much of a risk to African-American voters for us to roll the dice.”

Critics also question his record on employment discrimination, citing an appellate court case in which Kavanaugh disagreed with the majority of judges, who said that a Black woman fired from a job as House of Representatives deputy budget director could pursue claims of racial discrimination and retaliation in federal court.

“We’re mostly concerned about whether Judge Kavanaugh, if confirmed, would approach civil rights issues with the appropriate understanding and respect for the history of racial discrimination in this country,” said Thomas Saenz, president and general counsel at the Mexican American Legal Defense and Educational Fund.