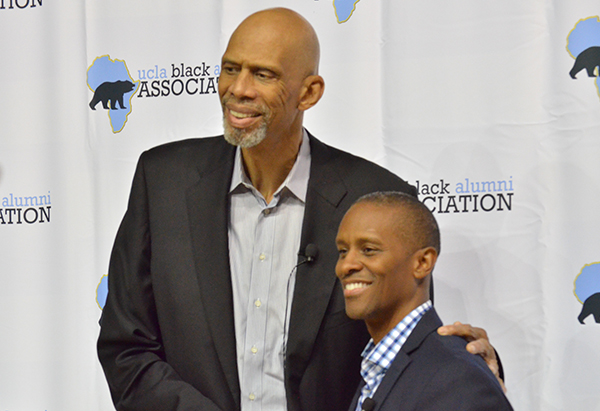 The Black Alumni Association and the UCLA Afrikan Student Union hosted a conversation and book signing with NBA legend Kareem Abdul-Jabbar for his new book “Coach Wooden and Me: Our 50-Year Friendship On and Off the Court.”

Abdul-Jabbar mentioned how the book focuses more on the bond both he and renowned former UCLA men’s basketball head coach John Wooden than how he coached Abdul-Jabbar to his consecutive collegiate championships.

“Its about the life lessons coach Wooden taught us that we used throughout our lives, not necessarily on the court,” Abdul-Jabbar said. “Coach Wooden was a very special human being.”

UCLA men’s basketball assistant coach Tyus Edney led the conversation with Abdul-Jabbar, asking him about the book, his life, and topics surrounding the world of basketball.

“I always admired [Abdul-Jabbar] and what he’s done for our school and basketball in general,” said Edney. “It was really exciting for me to be able to sit down with him.”

L.A. Sparks President and COO and UCLA Alumni Association President Christine Simmons noted how the event was a “momentous occasion”.

“The fact that we can carry this message of their character off the court, I think that’s so important.” Simmons said. “The amount of humility that [Abdul-Jabbar] shows–just being able to see how he epitomizes that–it’s such a beautiful thing.”

Abdul-Jabbar talked about fond moments he had with Wooden and how he spent more time with the historical coach when he signed with the Lakers. The NBA superstar noted how Wooden influenced his choice in attending UCLA and recalled a conversation about religious beliefs he had with his teammates and Wooden during a road trip. The discussion was considered to be “the most intimate conversation” his team had together.

“We ended up having a structured conversation and coach kind of mentored it,” Abdul-Jabbar said. “He didn’t tell anybody how to think or where to go with what they were doing, he just wanted to know what we were all about.”

Through the conversation, Abdul-Jabbar explained how he was raised to enjoy baseball at an early age and how he started developing his iconic skyhook in the sixth grade. He also talked about how he saw Dr. Martin Luther King speak in high school.

“I took part in a mentoring program that was run by Dr. John Henrik Clarke and he had Dr. King come and address the kids that took part of the program,” Abdul-Jabbar said. “I got a chance to ask Dr. King a question.”

Prior to the conversation, the organizations hosted the Dr. Winston C. Doby Legacy Scholarship VIP reception. Attendees learned about Abdul-Jabbar’s civil rights efforts when he was a student at UCLA, according to Afrikan Student Union Co-chair Kosi Ogbuli.

“I got more enlightenment about his activism,” Ogbuli said. “It was an experience to be able to talk to him about things deeper than basketball, things about his life, his activism and all the things he’s done.”

Abdul-Jabbar is still the NBA all-time leading scorer. Since his retirement from the NBA, the sixth-time league champion became a regular columnist for Time Magazine and The Washington Post. He is an author of several non-fiction and fiction books, including “Sasquatch in the Paint,” “Black Profiles in Courage,” and “Mycroft Holmes.”