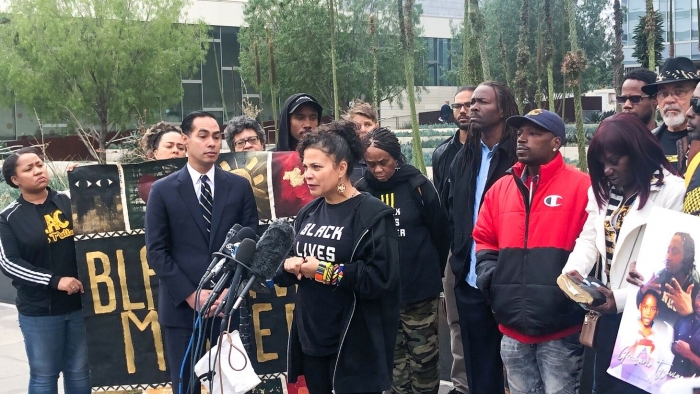 Former Secretary of Housing and Urban Development and San Antonio Mayor Julian Castro joined members of Black Lives Matter today as they demanded that police officers who shot and killed a man running through a mall carrying a long knife be held accountable.

“Are people going to be held accountable for violating LAPD policy or not?” Castro asked at a news conference outside Los Angeles Police Department headquarters. “That’s especially important where somebody loses their life. And so, you know, it’s important for me to lend my voice.”

The issue centered on the shooting on April 10, 2018, of 30-year-old Grechario Mack, who ran through the Baldwin Hills Crenshaw shopping mall armed with a foot-long kitchen knife.

The Police Commission, the civilian panel that supervises the LAPD, ruled that the final shots fired by the two officers, while Mack was on the floor, violated policy.

“Accountability begins when people who do not meet a standard or policy are held to account for that,” he said.

Mack’s parents were among those joining Castro at the news conference.

Continuing a two-day visit to Los Angeles, Castro also attended a roundtable discussion on veterans’ homelessness at the Rosslyn Hotel on Fifth Street and later joined supporters at a lunch reception.

On Thursday, Castro will deliver a foreign policy speech at his alma mater, Stanford University, and attend a reception with supporters in San Francisco.