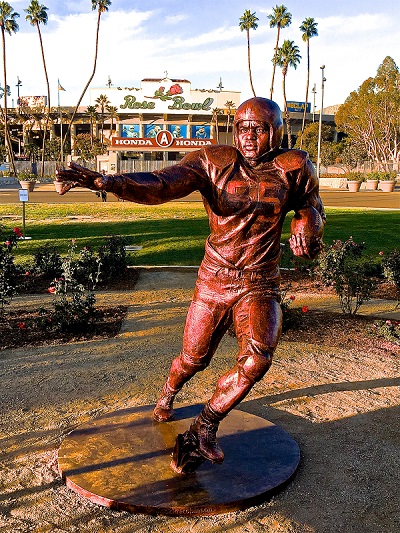 The Jackie Robinson statue was unveiled at the Rose Bowl Stadium in Pasadena, CA on November 29, 2017. (courtesy photo)

With blue skies and the San Gabriel mountains as the backdrop, the Jackie Robinson statue was unveiled as the first commemorative statue outside of the Rose Bowl stadium in Pasadena on Wednesday, Nov. 29. The statue is in honor of the late Jackie Robinson, best known for breaking baseball’s color barrier in 1947 with the Brooklyn Dodgers.

“He was the most courageous athlete I’ve ever met,” said retired Dodgers announcer Vin Scully, who spent 67 years covering the Los Angeles baseball team. Scully, who celebrated his 90th birthday on the day, emceed the program.

“I remember I was 22 years old going to my first spring training with the great Brooklyn Dodgers,” Scully recalled.  “I felt after the first time I met him that I could go up and talk to him at any time of night or day and he would be willing to listen and explain what I had on my mind. You don’t forget that.”

The statue that depicts Robinson in a football uniform was gifted by Alba and Thomas Tull of the Tull Family Foundation to Legacy Connections, the private nonprofit fundraising arm of the Rose Bowl Stadium. Thomas Tull produced the Jackie Robinson biopic, “42” in 2013.

“Jackie Robinson is a true American legend,” Alba and Thomas Tull said in a written statement, “and we are so honored to be able to recognize his legacy in a town and for a team that meant so much to him and the Robinson family.”

Nicknamed the first family of baseball, over 100 of Robinson’s family members including his wife Rachel Robinson and daughter Sharon Robinson were in attendance for the unveiling.

“I hope the combination of the sculpture, the photographs and the quotes help people understand the strength of his character,” his daughter Sharon Robinson shared. “He really believed in change and breaking down racism, he dedicated his life to that.” 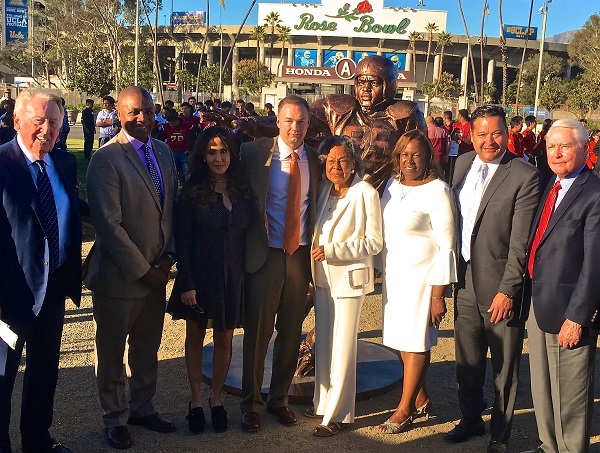 Donors Thomas and Alba Tull and members of the Robinson family pose with dignitaries at the Jackie Robinson commemorative statue unveiling outside the Rose Bowl Stadium in Pasadena, CA on November 29, 2017. (courtesy photo)

Robinson was a graduate of John Muir High School in Pasadena and lettered in four sports, baseball, football, basketball, and track and field, at both Pasadena City College and UCLA. He was voted most valuable player of PCC’s football team in 1938 and was the first-team all-conference quarterback in the Western Conference. Robinson played in the Rose Bowl in 1937 and 1938. In the 1938 Rose Bowl, Robinson led his team to a victory over Cal Tech, where he ran back a kickoff 104 yards for a touchdown, which is still believed to be the longest return in the history of the Rose Bowl Stadium.

White is an alumni of the Jackie Robinson Foundation scholarship program. The JRF foundation boasts 1500 alumni and has provided over $70 million in scholarship assistance in since 1973.

“I stand here today and say that I know that I am who I am and where I am because of the Jackie Robinson Foundation,” said White. “The foundation provides mentoring and leadership and all kinds of development tools that are impactful for your life beyond just the money.”

According to Scully, through his foundation and the erection of statues like the newest one at the Rose Bowl, Robinson who died in 1972 “will live forever.”

Pasadena Vice Mayor John J. Kennedy, who is also a Councilmember of the 3rd District, was instrumental in the Jackie Robinson’s statue being dedicated in the City of Pasadena.  He shared his thoughts;

The dedication of the Jackie Robinson Statute, in front of America’s Stadium, is a powerful testament to the world of Jackie Robinson’s legacy of bringing people together.  Jackie is one of the most famous people in the history of the United States.

Jackie Robinson represents the best in American Culture and more importantly, he calls from his hallowed resting place, young African American girls and boys to live out the fullness of their dreams in-spite of the ongoing pernicious impacts of racism and gender discrimination that simply refuses to die an ignoble death!

No short-sighted leader locally or nationally can diminish the powerful legacy of Jackie Robinson and the relevancy of service he had on improving race relations in the United States. Jackie and I attended Grover Cleveland  Elementary School in Pasadena and I represent on the Pasadena City Council, the area where the Robinson Family home nestled.

It was fun attended elementary school through high school with his nieces and nephews in Pasadena.  I worked with Jackie’s brother, Olympian Mack Robinson, when I served as President of the Pasadena National Association for the Advancement of Colored People some 30 years ago.  Mack served on the Executive Committee of the organization for many years!

The Jackie Robinson statue sets in front of the Rose Bowl Stadium, on a serene grass area, surrounded by the signature roses the stadium is named after.