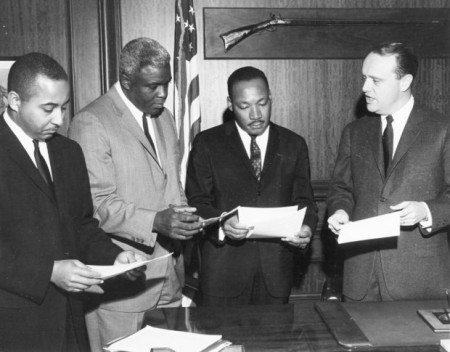 Near the end of his career, Robinson became more involved with the civil rights movement. People believed that his opinions on social injustice would tarnish his career. However, King praised his actions and called Robinson “a pilgrim that walked in the lonesome by ways toward the high road of freedom. He was a sit-inner before sit-ins, a freedom rider before freedom rides.”

Both King and Robinson earned honorary doctorate degrees from Howard University at a commencement in 1957. Robinson was seen alongside King during the March on Washington, the baseball star brought his three children along with him.

When speaking to the Southern Christian Leadership Council in September 1962, he thanked King for defending him.

“I knew this was a dedicated man and that he has made tremendous personal financial sacrifices in the cause,” Robinson said about king at the organization’s annual Freedom Dinner.

Robinson also hosted a jazz concert fundraiser to acquire bail money when King and other protesters were imprisoned. In the wake of the “Bloody Sunday” tragedy in Selma, Robinson sent a telegram to then president Lyndon Johnson, demanding him to take action against the violence inflicted on protesters.