Matthew Newman poses with some of people participating in the Inglewood worship protest. (Courtesy photo)

Matthew Newman, an Inglewood business owner, joined with the city’s faith leaders to hold a peaceful worship protest to commemorate the Juneteenth holiday as well as express their unity with the nationwide demonstrations prompted by the murder of George Floyd.

The inter-denominational event, which was held on June 18, attracted scores of people to participate on the lawn of Inglewood City Hall. The program offered music, prayers and focused on improved relations between municipal agencies and the community.

Commenting on the occasion, Cinder Eller-Kimbell, senior community affairs liaison for Inglewood Police Department, noted, “Martin Luther King, Jr. said it best – ‘Nonviolence is a powerful and just weapon, which cuts without wounding and ennobles the man who wields it. It is a sword that heals.’ When all people– no matter their ethnicity– gather in worship, all walls fall.”

Pastor Chambers said, “The worship protest was a wonderful event that allowed the community of Inglewood to come together in unity to worship God together and pray on the behalf of our great city and region. In these times of civil unrest and uncertainty, it was refreshing to gather on one accord and release our faith that true systematic equality and equity will be afforded to all people regardless of their skin color. My hope and belief is that justice will begin to run down like water and righteousness like a mighty stream.”

Sharing a similar viewpoint, Elder Jones, minister of music at Hope of Glory, added, “In times like these, we need a passion for politics to be coupled with the power and spirit of God to guide and influence our efforts. The worship protest movement provides a place for the latter which will ultimately empower and encourage our community to stay in the fight for justice.” 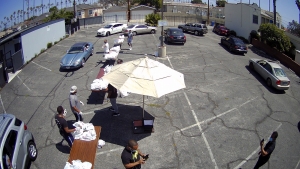