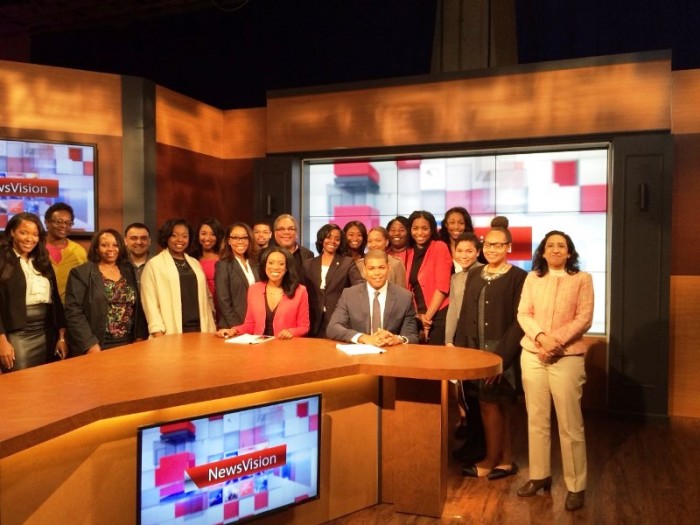 “NewsVision,” a Howard University student-produced newscast, returns to WHUT-TV May 7 after a hiatus of more than 20 years. It will immediately follow President Barack Obama’s address at the 148th Commencement Convocation at Howard University.

The newscast, which originally debuted in the late 1980s under the direction of late White House correspondent Lee Thornton, provides students hands-on experience in all aspects of newscast production, ultimately preparing them for careers in the industry.

Thomas is the executive producer of NewsVision, assuming the same role of her former professor.

“This has been an amazing and humbling full-circle experience,” said Thomas, an assistant professor, Howard alumna and former Miss Howard. “We all have worked extremely hard to keep Dr. Thornton’s legacy alive. I think she would be proud.”

NewsVision is produced by broadcast journalism seniors in the Department of Media, Journalism and Film in the School of Communications in partnership with WHUT-TV, a PBS station licensed to Howard University. The 30-minute newscast is the culmination of content written, reported and produced by journalists in the capstone course of the same name.

It is scheduled to air at 12:30 p.m. An encore presentation will broadcast at 10:30 a.m. Sunday, May 8. WHUT is the only HBCU licensed public television station in the country.

WHUT General Manager Jefferi K. Lee said he is pleased to have laid the groundwork for revising the project.
“At no other university program teaching television production in the Washington region can a student expect to see his or her work appear on TV screens in over 2.5 million households,” Lee said. “Thus is the power of WHUT and Howard University.”

The School of Communications, led by Dean Gracie Lawson-Borders, celebrates its 45th anniversary in September at the Newseum, a seven-level, 250,000-square-foot interactive museum of news and journalism in Washington.

The school has trained journalists and media communication professionals through five of the most recognized advertising, audio production, journalism, media management and public relations programs in the world.
For more information on the School of Communications, visit communications.howard.edu