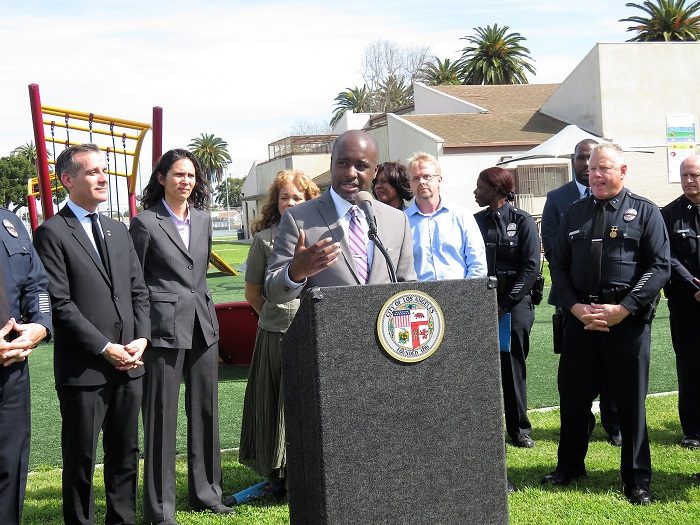 Councilmember Marqueece Harris-Dawson recently joined Mayor Garcetti and the Los Angeles Police Department to announce a new partnership to combat violent crime. The Community Safety Partnership (CSP) will be made possible with generous support from the Ballmer Foundation, founded by Steve Ballmer (former Microsoft CEO and current owner of the Los Angeles Clippers), and the Weingart Foundation founded in 1951 by Ben and Stella Weingart.

The CSP project will be located at Jackie Tatum/Harvard Recreation Center, in a South Los Angeles neighborhood that has been devastated by homicides and violent crime. The CSP was pioneered in 2011 in five housing developments, including three in Watts, funded by the federal Department of Housing and Urban Development. CSP is now a nationally recognized model of relationship-based policing which has been proven effective in reducing violent crime. In contrast to traditional enforcement and suppression strategies, the CSP prioritizes building respect and trust between residents and the police. Police officers in the CSP are given 40 hours of training from the Urban Peace Institute, founded by noted police reform leader and civil rights activist Connie Rice.

Prior to the program launch, the Urban Peace Institute will conduct a three month program of outreach to complete an assessment of the particular causes of violent crime in the community. The assessment will then be used to tailor CSP strategies for the Harvard Park community. Strategies that have proven effective in previous programs CSP’s have included youth programming, safe passages to schools, critical enforcement, and community affairs. The Harvard Recreation Center CSP is unique in that it will be the first such program created outside of housing developments.

“This community has agonized over violent crime and the loss of lives for too many years, and today I hope we mark a turning point,” said Councilmember Marqueece Harris-Dawson. “The CSP approach has been a change maker in Watts and we will build a new phase of CSP at Harvard Recreation Center. The goal is first and foremost, saving lives. The strategy toward that goal involves changing the relationship between community residents and the police that serve them. Our objective is to get this neighborhood fully engaged in creating the strategies to prevent crime, and implement those as a community united.”

The origin of the Harvard Recreation Center CSP goes back to the summer of 2015, after a spike in homicides in the 8th Council District. In just two weeks in August 2015, L.A.P.D.’s South Bureau experienced 30 shootings, resulting in 15 deaths. In response, Councilmember Harris-Dawson authored a motion that requested the L.A.P.D., the City Attorney, the Mayor’s office of Gang Reduction and Youth Development, the Department of Recreation and Parks, and Los Angeles Fire Department to report on establishing a comprehensive response, including creating programs that build on the success of CSP for South Los Angeles.

In its initial years of operation in Watts, CSP produced a significant impact in the area: in addition to reducing violent crime by more than 50% in all three Watts housing developments, the number of arrests also declined by 50%. With a focus on community relationship training and collaboration, it is no longer an isolated tactic of a few officers, but an established practice endorsed by the highest ranks of LAPD. The objective to build direct relationships with community members towards the re-defined goal of community safety, security, and welfare – not solely crime reduction – is what differentiates CSP from traditional policing.