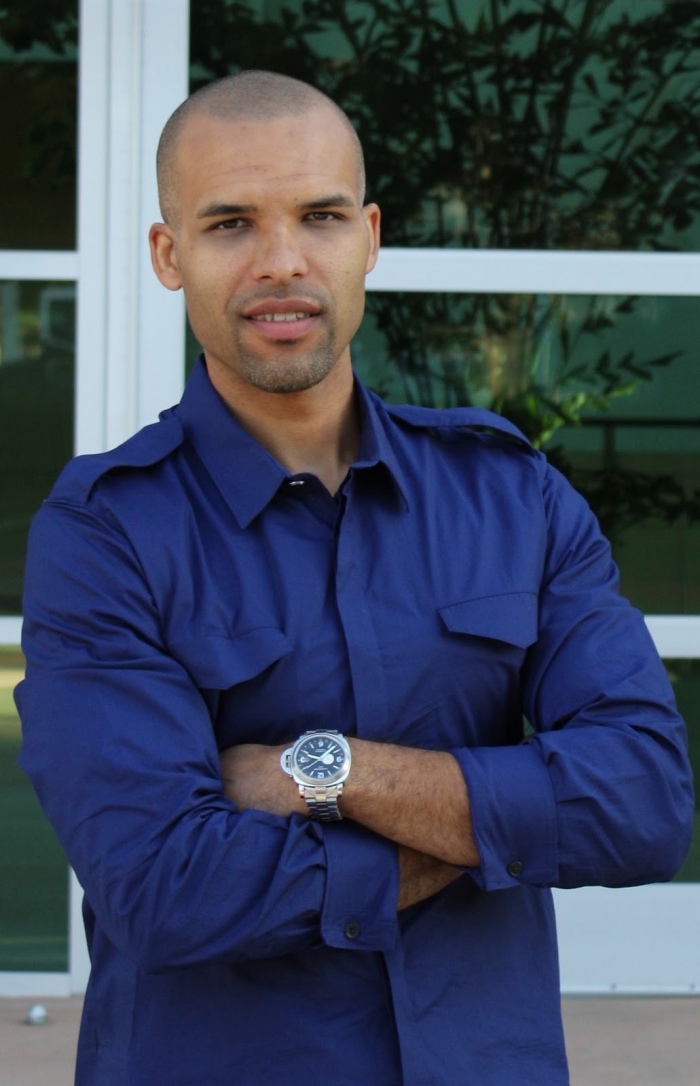 Global car designer Andre Hudson, who spent the first half of his career working for both General Motors and Hyundai, recently led a team of designers and sculptors, while working at the Italy-based Icona Design, re-imagining the next wave of vehicles.

In order to give us a peek into the future, we caught up with one of the foremost forward-thinkers and creative spirits in the field of design. Global car designer Andre Hudson, who spent the first half of his career working for both General Motors and Hyundai, recently led a team of designers and sculptors, while working at the Italy-based Icona Design, re-imagining the next wave of vehicles.

Unless you’ve been literally asleep at the wheel, no pun intended, whether you’re ready or not, both electric and self-driving vehicles are in the pipeline. This next phase of passenger transportation, which is literally one of the most significant changes the industry has experienced, since the shift from horses and buggies to gasoline engine vehicles, is literally right around the corner.

Since the 60s and the airing of the cartoon “The Jetsons,” we’ve been hearing about fully autonomous, flying vehicles. Well, believe it or not, we’re finally closer than we have ever been. We’re literally in the mix of mapping out the next phase of the transportation system. While infrastructure will have to be put in place to accommodate how we commute, car designers around the globe are working vigorously behind the scene to reimagine the experience of traveling in a vehicle, since the traditional means of sitting behind the steering wheel will no longer be in play. 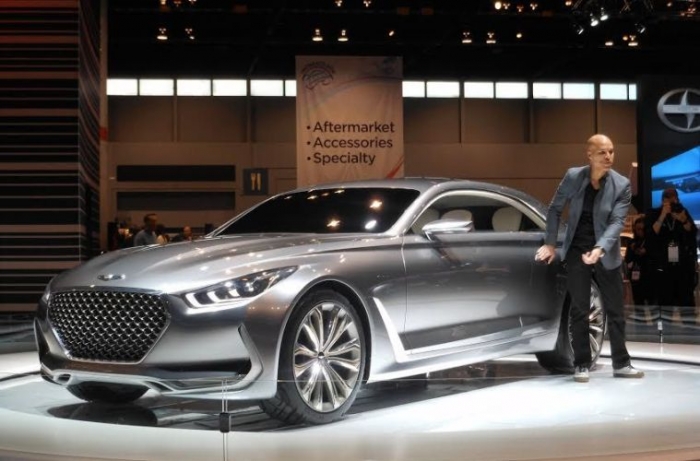 In order to give us a peek into the future, we caught up with one of the foremost forward-thinkers and creative spirits in the field of design. Global car designer, Andre Hudson, who spent the first half of his career working for both General Motors and Hyundai, recently led a team of designers and sculptors, while working at the Italy-based Icona Design, re-imagining the next wave of vehicles.

Hudson is a diamond in the rough in the field of auto design. In today’s world, one has a better chance of meeting a NBA or NFL player, as opposed to a car designer, and more specifically, a Black car designer. Globally, there are only 30 Black car designers. Hudson, who is known for adding curves and sex appeal to the 2011 Hyundai Sonata, played a key role with the stylish, hot-selling, four-door sedan, generating so much cash for the Korean automaker, it gave them enough confidence to develop the Genesis luxury brand. The Korean brand’s luxury flagship sedan, the G90, was also heavily influenced by the design genius.

While serving as the design director of Icona’s only U.S. studio, Hudson worked in collaboration with their studios in Germany, China and Italy, creating a fully autonomous vehicle that would finally give the world a realistic glimpse on the auto show circuit of what’s to come. The all-new, bubble-shaped Nucleus, which kind of reminds one of a flying saucer, made its international global debut, during the spring of 2018, at the Geneva International Auto Show, and its only U.S. appearance, at last November’s L. A. Auto Show.

Being that most of us weren’t even aware such a highly evolved concept vehicle existed, we wanted to go one-on-one with Hudson, who has had a hand in reshaping the future of what we now know as “tomorrow’s” passenger vehicle.

Jeff Fortson: Is the Nucleus based on a zero emissions vehicle?

Andre Hudson: The Nucleus is not based on a particular zero emissions vehicle but it is a zero emissions vehicle. The basic layout was designed to be fully electric, with the possibility of a hydrogen fuel cell supporting the battery system. Ultimately, it is about pushing the usable interior space to the max. When Level 5 autonomy becomes feasible, we will be able to remove the steering wheel and driver controls all together and use that space more efficiently. (Level 5 autonomy makes the vehicle completely self-driving.)

JF: What role did the U.S. studio that you oversaw play in the creation of the Nucleus?

AH: While the Nucleus was a global project for Icona Design, the U. S. studio led the project with all of the concept sketch development, which consisted of concept ideation and clay model development for the exterior. We also began the initial digital development of the interior in the US. As the concept size grew and came into formation, we used our global resources in design, digital modeling, and engineering to complete the Nucleus.

JF: What inspired the design?

AH: Inspiration came from many places, but most directly the idea that we wanted to make a larger mono-volume vehicle (essentially a van) into the most beautiful and sensual shape that we could. No matter what concept vehicle shapes you see produced every year, there is still no form as efficient as using a box for interior volume.

When we looked at larger vehicle designs, particularly yachts, we see this idea of a aero (or hydro) efficient shape surrounding beautifully appointed living quarters. In many ways the exterior of the Nucleus is a similar idea. On the interior, we actually looked at high-end architectural spaces like those found in various premium resorts around the world and even first-class appointments found on today’s large capacity airliners.

JF: What makes the interior of the Nucleus unique? 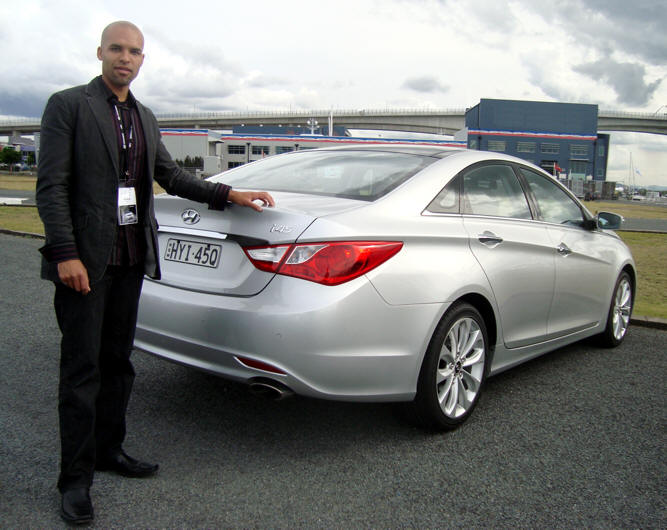 AH: The interior of the Nucleus was meant to surprise you as you stepped inside and took a seat. It was to be the most non-automotive feeling space one could imagine. We really wanted it to feel as though you were truly in a modern lounge or a hotel suite.

It is interesting! Pictures really do not do the space justice. You have to sit in it and take in all the lines, the light and the ambiance. We did everything possible to optimize the vehicle layout. The batteries were packaged under the floor, with full autonomy, there was no space required for the steering wheel and typical driver controls, and we packaged the motors for the drive system within each of the 28-inch wheels.

Essentially, all the mechanicals (devices normally in a vehicle) were pushed outside the passenger space. This allowed us to structure the interior more like a hotel suite or a rolling lounge. When the large single sliding door and hatch opens, you see a space that is warm and inviting. Three distinct seating areas present themselves, which are finished in cream and deep blue leather. A warm, indirect light feature leads your eye from the front to the rear (this feature also is an abstraction of our Icona logo). And a beautiful deep blue wood veneer spans the floor from front to back. We divided the space up into three key zones: the office, the lounge and the loft.

Towards the front of the vehicle you’ll find the office, with a large captain chair that greets you upon entry and rotates you around 180 degrees. This is where you’ll find a full width desk, with a built-in keyboard and iPad dock. Out of this desk also raises a full-service bar, complete with ice, champagne and flutes. The front occupant will also appreciate the surrounding terrarium, housing live plants that breathe an air of life into this modern space. Centrally, you will see a wide format display used to communicate key information to all occupants.

In the mid-section (of the vehicle), which you see first when the large door opens, you see a beautifully styled chaise lounge. Totally unexpected for a vehicle, it presents itself as being more like a piece of furniture than a car seat. It is meant to evoke a feeling of style, relaxation and modernity. This space can seat two sitting side-by-side or one occupant reclined.

And towards the rear of the Nucleus you’ll find the Loft. Another captain style chair that is elevated slight above the others on a raised, back-lit platform. This seat was designed for the ‘boss.’ It has been designed with a cantilevered desk that houses an iPad and blanket. The seat can also be tilted rearward to a zero-gravity position for ultimate comfort. The view over the rest of the Nucleus interior is truly spectacular from the seat.

JF: How many people can the Nucleus transport?

AH: The Nucleus was really designed around three occupants. Remember, space is luxury, and that’s what we wanted to demonstrate. We did think about the necessity to carry more than three, and for that, we designed the desk in the rear. Not only does it disappear into the rear, it exposes a secondary seat to the left of the loft captain chair. Again, as mentioned before, the lounge area could accommodate two, bringing the overall vehicle capacity to five.

Click here or visit JeffCars.com to check out part two of our conversation with Andre Hudson. Since our interview, the highly sought after designer, has accepted a new career opportunity, as the head of design for the California-based Independence Electric. In his new role, Hudson will be helping to shape the future of electric cars.

About Jeff Fortson: He is the host of SiriusXM’s only multicultural automotive radio show. The show, which features one-on-one conversations with influencers like Hudson, can be heard weekly on Channel 141, Fridays at 12 PM ET. For additional air dates, new car reviews, used car buying tips and more, visit his website, JeffCars.com.

Statement by DCBA Director Joseph M. Nicchitta on the Advancement of Califo... 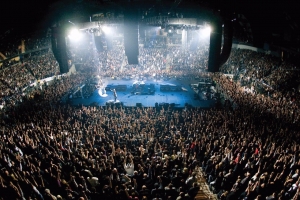 Toyota Signs on as Naming Rights for Ontario, California Arena