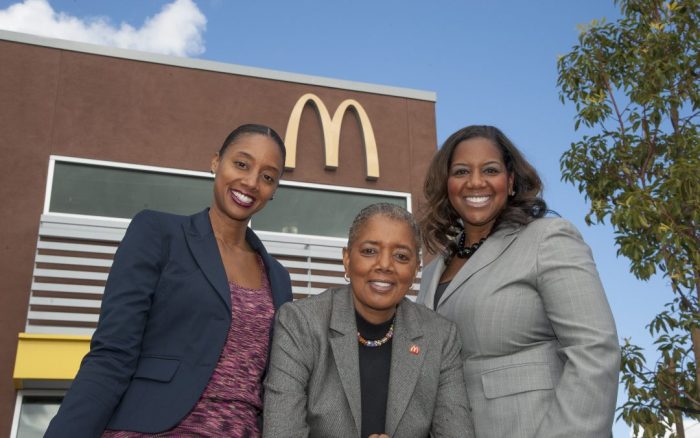 The Greater Los Angeles African American Chamber of Commerce will honor Patricia Williams (center) as the franchise owner of the Year at the 26th Annual Economic Awards on Friday, March 8, at JW Marriott LA Live. Williams and her daughters Kerri Harper-Howie (left) and Nicole Enearu (right) own and operate over a dozen McDonald restaurants. (courtesy photo)

The Greater Los Angeles African American Chamber of Commerce (GLAAACC) will honor entrepreneur and philanthropist Patricia Williams as the Franchise Owner of the Year at the 26th Annual Economic Awards Dinner on Friday, March 8, at the JW Marriott at LA Live in downtown Los Angeles. The gala awards ceremony recognizes individuals, small businesses and corporations who have contributed to the economic growth and development of the African American small business community.

“Patricia Williams is one of the most successful franchise business owners in the country,” said GLAAACC Chairman Gene Hale. “Not only is Pat successful, but her generosity in giving back to the community makes it an honor to recognize her for her many contributions.”

Williams did not start her career with entrepreneurial aspirations. With a bachelor’s degree in recreational therapy and a Master’s Degree in counseling, she put her education to good use as a rehabilitation therapist. Her husband was a police officer for the Los Angeles Police Department. Williams was inspired to take a leap of faith and go through the certification process of becoming a McDonald’s owner by a family member who owned McDonald’s franchises. In 1984, the couple cashed out their retirement accounts and used the funds to purchase a McDonald’s franchise in Compton.

The first location turned out to be a success, which led to the purchase of a second franchise 18 months later. Unfortunately, the couple divorced, and Williams purchased her husband’s share of the business. Ten years later, the single mother of two sold both stores and purchased five more franchises.

Williams’ strategy for business growth consisted of a combination of acquiring existing locations and building new ones. Over three decades later, Williams’ McDonald’s empire includes over a dozen stores with 700 employees and an annual revenue of $50 million.

She has made Black Enterprise’s List of the country’s 100 largest Black-owned businesses (The BE 100) numerous times and received many awards and accolades. Her daughters, Nicole Enearu and Kerri Harper-Howie, have also joined the family business.

In the early 2000s, Enearu participated in McDonald’s certification process for owners and purchased her own store. She later became the first female African American chair for McDonald’s Southern California Regional Leadership Council.

Already a successful lawyer, Harper-Howie started out in the family business by providing legal and human resources assistance. She soon embarked on the Next Generation training program for children of McDonald’s owners in preparation for operating her own store.

Today, Williams and her two daughters operate a multi-million dollar company that provides hundreds of jobs to the local community.

They also provide scholarships to local students and fund local and national charities.

“One lesson that I hope I instilled in every life that I have touched is that if you want it bad enough and you’re willing to make the sacrifice, you can achieve it,” said Williams.