The Los Angeles Police Department will get extra resources to make sure its officers are safe and supported following the killings of three law enforcement officers and the wounding of three others in Baton Rouge, Louisiana, Mayor Eric Garcetti said on July 17.

The additional resources will include doubling air assets, assigning officers from the elite Metropolitan Division to back up responding patrol officers and adding additional people to help screen 911 calls, Garcetti and LAPD Chief Charlie Beck said.

“Our hearts go out to the families of the three Baton Rouge officers who were killed this morning… This violence against police officers undermines our democracy. Our collective voice must rise up to condemn this latest shooting in what is unfortunately becoming a horrifying trend,” Garcetti said.

“The city of Los Angeles is committed to building and deepening relationships. We will not be deterred from our mission to protect our communities, support our police officers, and strengthen constitutional policing in our city,” the mayor said. “We will continue that work with an open door in our neighborhoods, in City Hall, and in our police stations.”

Garcetti also said, “Too many days recently, our hearts are aching as a result of unthinkable violence in our country, but we cannot turn away from our mission to protect and serve. God bless the fallen officers and their families and we will not be deterred.” 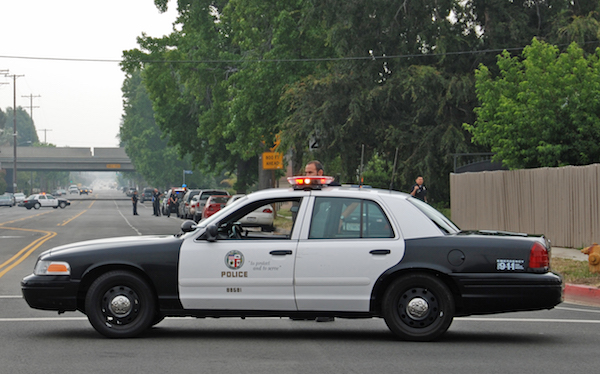 The Los Angeles Police Department will get extra resources to make sure its officers are safe and supported following the killings of three law enforcement officers and the wounding of three others in Baton Rouge, Louisiana, Mayor Eric Garcetti said on July 17. (file photo)

Chief Beck said, “The duties of a police officer are not always easy and in many instances face the most extreme criticism due to the very nature of their obligations. Even in the wake of such horrific attacks on their fellow brother and sister officers across this nation, LAPD officers have never hesitated to protect our city and keep us safe.

“These cowardly attacks on law enforcement on law enforcement officers will not resolve the issues and concerns that some have within society,” Beck continued. “Communication is the key and the reprehensible violence and unspeakable crimes that we have seen in Dallas and Baton Rouge will only serve to divide rather than unite us all.”

The Los Angeles County Sheriff’s Department reported there were “no specific or credible threats received by law enforcement for the Greater Los Angeles area,” in connection with the killings in Baton Rouge, Louisiana.

The Baton Rouge gunman has now been identified by law enforcement as 29- year-old Gavin Long of Kansas City. Long, a former Marine, was killed in the shootout with police. CBS2 reported that as a Marine, Long was temporarily stationed in San Diego. Long, who used the name Cosmo Setepenra on line posted a video on Youtube July 10, in which he railed against bullies, protesting and oppression. He also started a website he called Convos with Cosmo.

“For the second time in two weeks, police officers who put their lives on the line for ours every day were doing their job when they were killed in a cowardly and reprehensible assault. These are attacks on public servants, on the rule of law, and on civilized society and they have to stop,” Obama said.

“We may not yet know the motives for this attack, but to be clear, there is no justification for violence against law enforcement. None,” Obama said. “These attacks are the work of cowards, who speak for no one. They right no wrongs. They advance no causes.”

The Los Angeles Police Protective League, the union representing LAPD officers, issued a statement calling for “the civic leaders of our nation to replace platitudes and rhetorical support for law enforcement with action.”

“Our police officers deserve your strongest support and undivided attention,” the statement said. “Now that 10 law enforcement officers have been murdered in 10 days, what will you to keep our communities safe?”

The statement also criticized what it described as “anti-police activists,” a thinly veiled reference to groups like Black Lives Matter.

“To the anti-police activists, whose apparent sole focus is to lay blame for all the ills of society on those who wear a law enforcement uniform, save your statement of ‘condolence’ to the families of these slain officers unless it is accompanied by the same level of outrage and contempt exhibited after recent officer involved shootings,” the LAPPL stated. “Anything less would be hypocritical.

“In just over one week’s time, this nation has seen its law enforcement officers targeted, hunted and murdered again. We cannot keep our neighborhoods safe if the men and women we ask to protect our communities face ambush around any potential street corner. These officers paid the ultimate sacrifice for simply doing their job.”

In response to the murders in Lousiana, Orange County Under Sheriff Don Barnes said in the Orange County Register, “Our hearts go out to the Baton Rouge Police Department. It’s unfortunate that only one day after the last police officer is put to rest in Dallas, we’re in mourning again for three officers killed in the line of duty. It’s a tragedy.”

Barnes, a 28-year-veteran of the OCSD, said the department issued warnings shortly after the Dallas shootings to its personnel, telling them to operate in a “heightened sense of awareness.”

“We have reinforced with our personnel the need to be vigilant and to be aware of our surroundings,” Barnes told the Register. “But we have to couple that with our responsibility to the public. The threat has changed, no only do we have targeted attacks at law enforcement, but we’re dealing with worldwide terror incidents that hit close to home.”

Barnes said that after today’s killings, the OCSD along with other municipal agencies began an evaluation of the situation to determine if there were threats directed toward Orange County.

“All indications at this point are that it is an isolated (incident) to Baton Rouge,” Barnes told the newspaper. “Orange County law enforcement with the municipal agencies will remain diligent to protect the public.”

Orange County Fire Authority spokesman Capt. Steve Concialdi told City News Service, “OCFA firefighters are wearing black mourning bands in support of the Baton Rouge police officers. All of our firefighters’ hearts are breaking for the families of the police officers that were killed and for their fellow officers they served with.”

Concialdi continued, “Law enforcement and the fire service is a huge brotherhood and anytime we lose one of our own, we are reminded how dangerous the job is to protect and serve the public. This senseless violence needs to stop.”

In a published letter to the OC Register, written after the Dallas murders of police officers but before the Baton Rouge shootings, OCSD Sheriff Sandra Hutchens said, “While Orange County includes some of the safest neighborhoods in the country, we must remember that we are not immune to the unrest spreading across the nation… we have all watched the issue bubble up from our television screens and smart phones. We have collectively mourned the lives that have been lost.”

Hutchens went on to thank the people of Orange County for the way they have responded to local law enforcement in the wake of these tragedies.

“You have cared for us greatly over the last week by bringing food to our stations, stopping our deputies and officers to say, thank you, anonymously picking up our tabs at lunch and sending an endless barrage of support through emails and social media. It has been these gestures …that have encouraged our personnel to continue to accept the inherent risk that always has come with this profession.”

Hutchens also said that moving forward from these tragedies will only come through “our shared responsibility to ensure an incident of this magnitude doesn’t happen in Orange County. It is only through partnerships and continued, honest conversation that we will gain a mutual respect and understanding for one another.”

Los Angeles Airport Police Officers’ Association president Marshall McClain said it appeared the Baton Rouge officers were set up and ambushed. “While any loss of life is tragic, this mindset of a ‘purge’ or plotting to murder police officers should alarm every single person in the country and not just the hundreds of thousands of law enforcement officers that serve with dignity and honor every day.

“We ask our political leaders to come together and speak as one united voice and condemn these attacks on law enforcement loud and clearly Now is not the time to be on the fence or indecisive,” McClain said