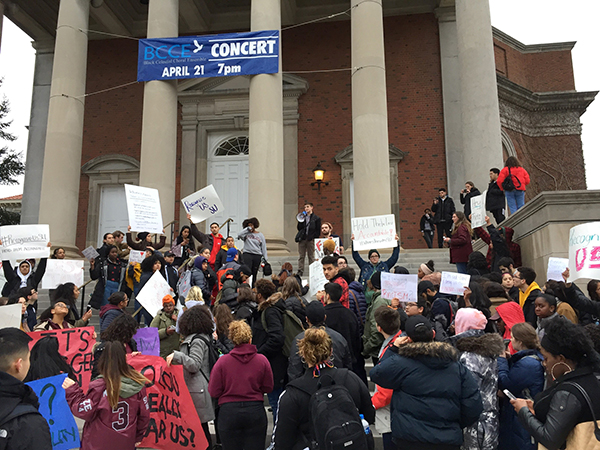 Syracuse University students gather outside Hendricks Chapel on Wednesday, April 18, 2018 to protest a video made by members of a now-suspended fraternity showing racist and sexist behavior in Syracuse, N.Y. The school’s chancellor, Ken Syverud, described the video involving members of Theta Tau, a professional engineering fraternity, as racist, anti-Semitic, homophobic, sexist and hostile to people with disabilities. He said the videos were turned over to the school’s Department of Public Safety for possible disciplinary or legal action. (Lindsey Sabado/The Syracuse Newspapers via AP)

Syracuse University suspended 15 members of a fraternity following the release of a video showing pledges using racial slurs and simulating a sexual assault of a disabled person, lawyers for the students said Friday.

Theta Tau fraternity members were informed by the school Tuesday that they faced indefinite suspensions of one or two years, most of them for harassment, said attorney Karen Felton.

Video posted by a school newspaper in April showed a group of men laughing at performances punctuated by racist language against blacks, Jews and Hispanics and simulated sex acts. The footage sparked protests on campus and made national headlines.

The fraternity apologized for what members said was a “satirical sketch” at a private event depicting an uneducated, intolerant person.

But the university expelled the fraternity and started disciplinary actions against individual students. The school on Friday said it could not comment on the specifics of the sanctions because of federal privacy laws.

Students planned to appeal to the school and were preparing for litigation, Felton said.

“I think all of the students are willing to leave and want to go to another school. I think the question is whether they’re going to be able to get into another school when they have on their transcript the scarlet letter of being suspended for harassment,” said Syracuse University law professor Gregory Germain, an adviser for several students during the disciplinary process.

The university’s dean of students, Robert Hradsky, said in a letter to students and staff said that the matter was conducted fairly and expeditiously.

“It is now time for our community to focus on the important work of advancing a more inclusive campus community,” he said.