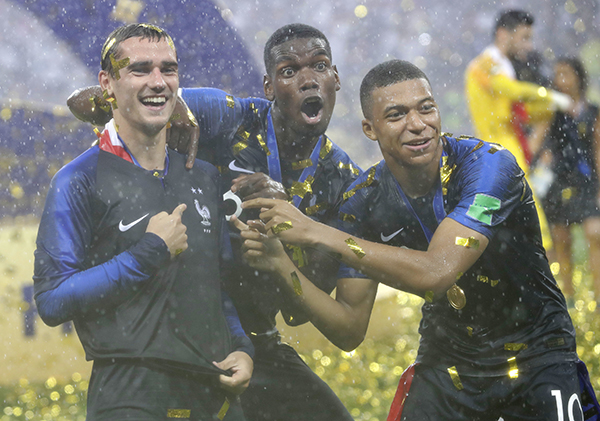 France’s Antoine Griezmann, points to two stars on his jersey indicating two world cup wins, as he celebrates with Paul Pogba and Kylian Mbappe after the final match between France and Croatia at the 2018 soccer World Cup in the Luzhniki Stadium in Moscow, Russia, Sunday, July 15, 2018. France won the final 4-2. (AP Photo/Matthias Schrader)

France has a long and troubled history with immigration which has in turn led to a diverse country that parallels the United States in many ways. The French have managed to integrate their marginalized communities into society in a way that almost mirrors the American strategy. Black and Arab immigrants from the French West Indies and Africa have bestowed upon France a melting pot that rivals that of the US.

At the 1998 World Cup in France, the French team emerged victorious for the first time, adding a lone star above their national team crest. The French National team has, in recent times, had a volatile relationship with its country, suffering from a self-induced identity crisis. The victory came at a time where immigration into France was causing the tension and uneasiness that existed in the country, to appease itself ephemerally.  The nation was able to pull together and rally around a team as diverse as the country was already and would continue to become. Black Frenchmen, Arab Frenchmen and White Frenchmen all playing together to represent “Les Bleus.” It was widely believed that the French National team was an analogy of France itself, that even though giant leaps had been made to progress the inclusivity of minorities within French society, the veil would come down sooner or later and the façade would come crashing down. When the team was successful, they were Black, White and Arab. When the team lost, they were despicable trash from the suburbs.

The triumph of that 1998 World Cup was not lost on the current stars of the French team however. Only children then, what they witnessed their fellow countrymen accomplish sent ripple effects throughout the nation, the effects of which we saw come to fruition during the 2018 tournament.

At the start of the World Cup, France had a one-in-eight chance of lifting the trophy, but anyone who witnessed what they accomplished two years ago knew what they were capable of. In June of 2016, France hosted the Euros, a major international soccer competition between European countries of the UEFA confederation. The tournament was hosted by the French. With a hungry young team of established young stars along the likes of Paul Pogba, Antoine Griezmann, Blaise Matuidi, N’Golo Kanté, Kylian Mbappé (who was not even born yet during the 1998 World Cup victory) and a legion of otherworldly soccer talent, launched their way to the final on their home soil against Portugal. Les Bleus would inevitably lose the match to a Cristiano Ronaldo-less Portugal, but not without first reunifying a country that was in shambles due to the 2015, November 13, Paris attacks that left 137 dead and dozens more wounded. It has since had a similar effect on France as 9/11 had on the United States.

Even though a major trophy had just evaded them, it set a major precedent to the soccer world. This France team was young, absurdly talented and with a depth pool that was seemingly never-ending.

In 2018, the young French team that lost a major European final on home soil, finally came of age. They can now indisputably call themselves World Champions, a feat that permeates every nodule of French culture. Football is and has always been inextricably linked with politics, society and culture. They are one in the same.

The beautiful game, football, soccer has many names. It is perhaps the most human game we have. Perhaps the most human game ever conceived because of its charming simplicity, a game that requires 22 players and a ball. A game with the unique ability to bring together and unify people of every strata. France’s blended society produced some of the greatest talents of this generation, and have successfully unified (at least for the time being) a fractured country.