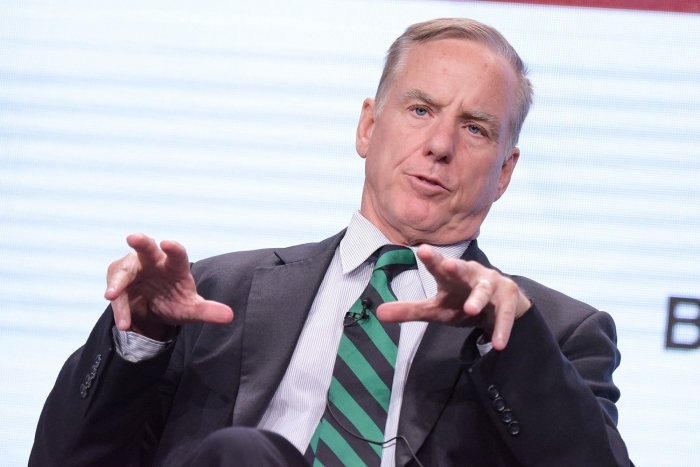 “We cannot have a party where the constituency looks like one thing, and the people who are running at the top of the ticket look like something else,” said Howard Dean, who served 12 years as governor of Vermont and chaired the National Governors’ Association, the Democratic Governors’ Association, and the Democratic National Committee. (Courtesy photo)

But the toughest challenge the Yale graduate said he ever experienced was his 2003 run for president of the United States.

“My wife didn’t get affected by it, my children didn’t, but running for President is the hardest thing I ever did,” Dean told NNPA Newswire. “It’s very hard work. You don’t sleep. You eat crappy food – for several months, I was on a peanut M&M’s diet. I’d get off a train or a plane, and it’s peanut M&M’s.”

“There were plenty of good days, mainly when you are unexpectedly in front of 25,000 people,” Dean stated.

Most impressively was the commitment of American citizens often witnessed by Dean on the campaign trail, he said.

“I remember one time when I was in Iowa, and an older lady in a wheelchair came up and said, ‘I want you to take this $50.’ She gave me a bag of quarters that totaled $50. I told her that I couldn’t take it, she had been saving the money from her disability checks and said the election was that important,” Dean stated. “I realized the burden that you who are running for president have on people. You’re really not doing it yourself, and if you are, you’re probably in the wrong business.”

“This is a real responsibility.”

Dean doesn’t recall the overriding occurrence that compelled him to run for president in 1993.

“I knew we’d been lied to about the war in Iraq. There were no weapons of mass destruction. I had been reading a lot of foreign newspapers and I also knew that British Intelligence had said there were no weapons, which [Former Vice President] Dick Cheney and [Former President] George W. Bush had been telling everyone,” Dean stated.

“So, I was very much against that war and I wanted a universal health care system where everybody had basic health care. That’s why I ran for president.”

Despite the massive division in today’s politics, Dean recalls a time when America and U.S. politics were even more divided.

“During Vietnam, it was so much violence. Not that it couldn’t get more violent, but you had civil rights leaders being beaten on the Edmund Pettus Bridge, the lunch counters in North Carolina, and all kinds of stuff that went on for a long time,” Dean stated. “Kids were being shot dead at Jackson State. So, I think it was a worse time, so unsettled.”

With the 2020 Iowa Caucus kicking off primary season, Dean said he believes Democrats will face a fierce battle to win back the White House.

“First, when you have a foreign government helping one of the parties, that’s a major problem, and it makes it more difficult,” Dean stated. “What [Russian President] Vladimir Putin is trying to do is not so much to support a person, but he’s really trying to eliminate any idea of truth. He’s attacking the country in a very clear and more dangerous way. He’s gone further than they even did during the Cold War. So, these are pretty big problems that we have to figure out how to overcome.”

However, Dean said he believes President Trump can be defeated.

“We have our core constituents and a good number vote Democrat, not because they love Democrats or hate Republicans. African American and Latino people of color in general, actually all people of color now, are in our camp. There’s just one ethnic group, Vietnam Americans, who don’t vote for us,” he said.

Women count as the primary reason Democrats have a chance to beat Trump because of females of all ages overwhelmingly favor the party, according to Dean.

Still, he noted that diversity must be reflected in the 2020 Democratic ticket.

“We cannot have a ticket that is two old white guys. It cannot happen,” Dean stated.

“We cannot have a party where the constituency looks like one thing, and the people who are running at the top of the ticket look like something else,” he stated.

“Our constituency is darker, younger, and more female. So, we have to start thinking about this and not resist change. Trump has mobilized people who now understand how awful the Republicans have done, and that they cheat, and they’re dishonest. They don’t care about the rule of law. They’re very dangerous.”

The message from the party should be that everyone needs a job, and everyone needs an educational opportunity, Dean said, adding that racism in all forms must also be properly addressed. “And, we do have to be sensitive about unintentional racism, too,” he said. “If you haven’t had the experience, you can’t understand, and you make judgments that are based on incomplete information. That’s very common, and it’s not alright.”