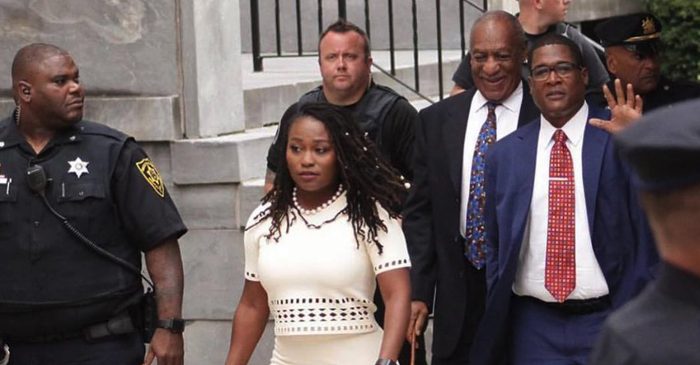 Former District Attorney Bruce Castor: …there was “no question that Cosby relied upon my representation when he submitted to depositions in the civil case related to the allegations made by Constand.” (Photo: Screen capture from 2016 Reuters report video)

In a brand new court filing on Tuesday, former Montgomery County District Attorney Bruce Castor confirmed that the civil depositions used to convict Bill Cosby should never have been used at all and the comedian agreed to waive his Fifth Amendment rights and sit for the queries knowing that the documents would always be kept private.

And, even if unsealed – as it eventually was – Castor said his agreement with Cosby was that no future District Attorney could use them as a tool to prosecute the comedian.

In his bombshell filing, Castor also for the first time publicly acknowledges a long-standing feud between he and Montgomery County Judge Steven T. O’Neill, who presided over Cosby’s two trials, including the second trial that led to Cosby’s conviction on three counts of aggravated indecent assault.

With the new information, Cosby’s lawyers immediately filed a petition seeking to get the comedian released from prison.

They also renewed calls for O’Neill to recuse himself from the case.

Castor reiterated that he didn’t prosecute Cosby because there was no evidence and Andrea Constand had repeatedly changed her story, did not have credibility and was not reliable.

“Before being sentenced for a crime he did not commit, Bill Cosby filed a motion demanding that Judge O’Neill provide a full accounting of his longstanding feud with and bias against Bruce Castor,” Camille Cosby said in a statement issued Tuesday by family spokespersons Ebonee Benson and Andrew Wyatt.

“The motion explained that Mr. Cosby, after the feud was disclosed in an unsourced tabloid article, retained a former FBI agent to investigate the judge,” Camille Cosby said. “The former agent discovered that there was in fact a longstanding feud between the two that dated back to a 1999 political campaign for DA.”

To prove existence of the feud, Cosby’s team issued subpoenas requiring the testimony of Castor and other key witnesses on September 24, the first day of Cosby’s previously scheduled sentencing.

“On September 19, however, O’Neill issued an order denying the request for a hearing and falsely claiming that not once during his tenure as District Attorney, no one, including Castor, heard him ascribe any type of grudge or prejudice against the former DA, Castor” Camille Cosby said.

“The judge’s self-serving order, preventing as it did the testimony of Mr. Castor, successfully kept the truth from being disclosed not only in his courtroom but also in the court of public opinion,” she continued.

Camille Cosby retained a former prosecutor from Harrisburg, Pa., Brian Perry, to facilitate her efforts to uncover the truth. Perry has since interviewed Castor, who signed a notarized affidavit confirming O’Neill’s longstanding, deep-seated bias against him.

“In or about January or February of 1999, at the Upper Moreland Township Building in Willow Grove, I engaged in a debate against Steven T. O’Neill,” he said.

“The next morning, I received a call from Montgomery County Republican Party Chairman Frank Bartle, who indicated that he had just received a call from Bill Donnelly, a key supporter of O’Neill’s campaign and the political leader of the party that encompassed Upper Moreland Township.

“Mr. Donnelly informed Mr. Bartle who relayed it to me that he, Donnelly, thought placing the female assistant District Attorney in the front of the debate to distract O’Neill was playing dirty politics.

“I responded that no one on the campaign had anything to do with the female’s attendance at the debate, and that was the first time I learned O’Neill was having or had an affair with the female assistant District Attorney, who worked in my office.”

The feud became real after Castor said he arrived at a political event in Harleysville, Pa., at around 11:30 a.m. He said he exited the event with a number of individuals, including his own wife, Chairman Frank Bartle and his wife, Bill Donnelly and State Rep. Bob Godshall.

“Our group encountered O’Neill as he arrived at the event with a woman that I later learned was his wife. I specifically recall Godshall asking O’Neill if the woman with him was his wife,” Castor said.

“This caused O’Neill to angrily accuse me, and the entire group, of running a smear campaign and trying to ruin his marriage and life. I remember O’Neill’s wife saying similar things at that time. They both reacted with what I thought was overly dramatic gestures and language,” he said.

“There’s no question in my mind that O’Neill blamed me and my political supporters for raising his marital infidelity in a smear campaign to defeat him,” Castor said.

“It is my belief that O’Neill has never forgiven me for this.”

Castor went on to describe his relationship with O’Neill over the next 16 years as strained and tense.

When O’Neill ruled that Castor couldn’t testify on behalf of Cosby because the judge claimed the former DA was “not credible,” Castor said he viewed that as an attempt to hurt him publicly and it was a measure of political and professional payback.

Further, Castor said there was “no question that Cosby relied upon my representation when he submitted to depositions in the civil case related to the allegations made by Constand.”

“Indeed, it strains my credulity that given Cosby’s resources and access to able counsel, there is any other reason but for my representation that Cosby would fail to invoke his Fifth Amendment protections,” Castor said.

“Indeed, Constand’s civil counsel, who took Cosby’s deposition and knew [that] what he had said that was incriminating for a criminal case, never asked me to review it with an eye toward re-opening the Cosby investigation,” he said.

Cosby’s attorneys said he should be released immediately.

“Mr. Cosby did not violate any conditions of bail and appeared for all required court proceedings,” his attorney wrote in court filings Tuesday.

“Subsequent to the jury returning its verdict, as a condition of bail, Cosby was confined to in-house arrest. Again, Cosby appeared for all court proceedings. Mr. Cosby seeks the reinstatement of bail as it existed prior to sentencing.”

Video from February 2016 — A Pa. judge refused to dismiss a sexual assault case against Bill Cosby on Feb. 3, setting the stage for the first criminal prosecution against him. (Reuters)