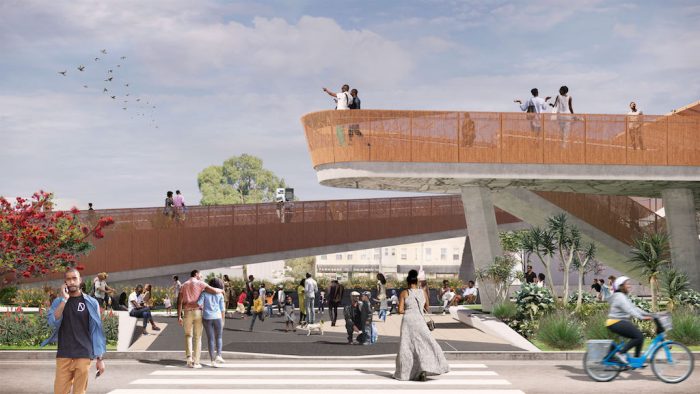 The first renderings were released today for Destination Crenshaw, a 1.3-mile-long outdoor art and culture experience celebrating Black Los Angeles under development along Crenshaw Boulevard. Spearheaded by L.A. City Councilmember Marqueece Harris-Dawson, this community-inspired project will use the iconic street as a canvas and anchor for public art and streetscape design. With designs by Perkins+Will, the visionary architectural firm behind the Smithsonian Institution’s National Museum of African American History, Destination Crenshaw will celebrate the historic and contemporary contributions of Black L.A. to the city and the world. The project begins construction in early 2019 with plans to open in Spring 2020. 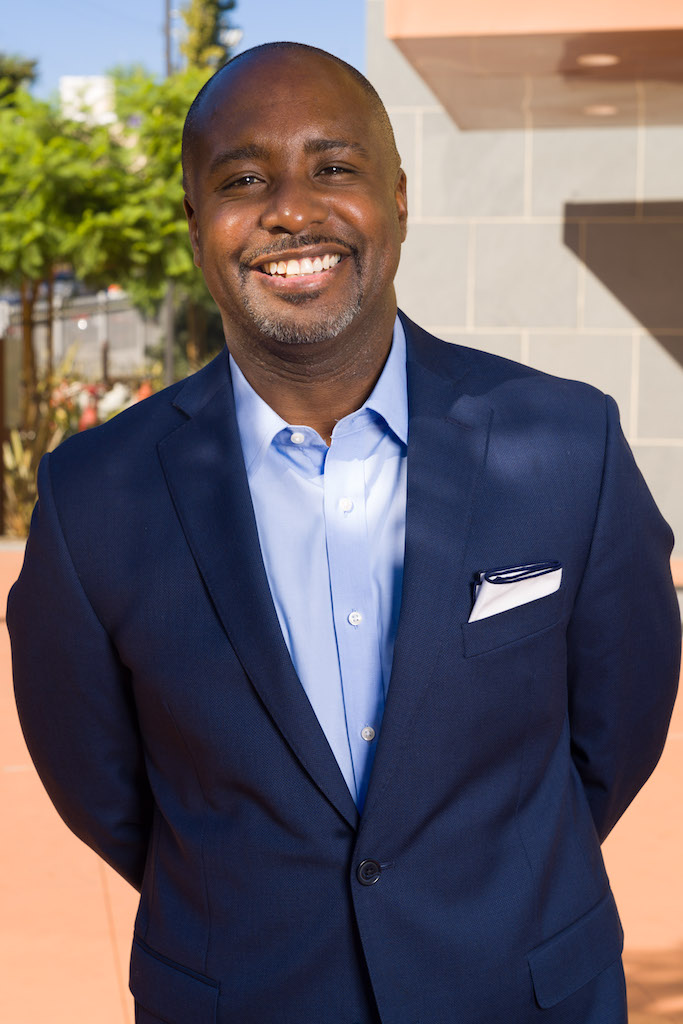 Renderings revealed Saturday at an event for community leaders show a new community amphitheater with an elevated overlook with views of the downtown skyline, the Hollywood sign, and the entire Destination Crenshaw project. The renderings also show off a potential treatment of the world famous “CrenshawWall,” also called “OurMighty Contribution.” The Wall, a major component of Destination Crenshaw, will also be opposite one of the 11 new pocket parks and parklets built to house hundreds of art opportunities. Landscaping along the boulevard by Studio MLA will include hundreds of new trees and additional streetscaping. Unlike traditional museums, Destination Crenshaw won’t be bound by walls or ceilings. The open-air, public art and cultural experience will feature architectural designs that capture the innovative and trailblazing spirit of Black L.A. 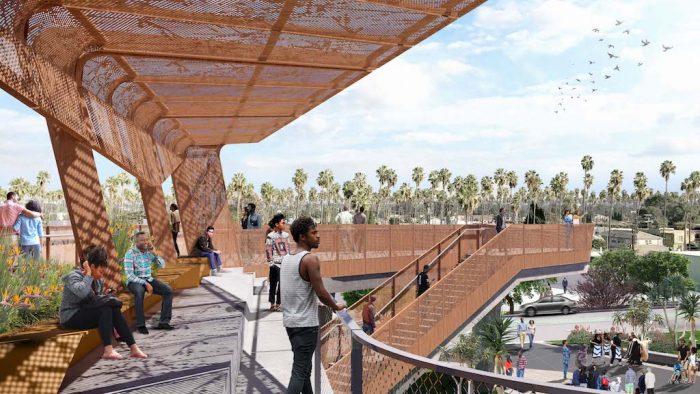 “Destination Crenshaw is a historic project for Los Angeles and the world,” said Councilmember Harris-Dawson.“Thestamp we will make on Crenshaw Boulevard with more than 100 unique art installations, a dozen African American­-themed pocket parks, and culturally-minded street and landscaping improvements will be a living reflection of Black L.A. and the creativity that pours out of our community.”
Located along Crenshaw Boulevard from 48th to 60th Streets, this linear outdoor museum will flank the new Crenshaw/Los Angeles Airport(LAX)Metro Rail Line. This section is the only segment of the line on Crenshaw Blvd.—and one of the only major corridors in L.A. County—where the train is at-grade versus under or above ground. As one of the first stations upon leaving LAX, the Hyde Park stop and the at-grade length of the line will have clear views of Destination Crenshaw and will serve as the gateway to the City of Los Angeles for riders from across the globe. 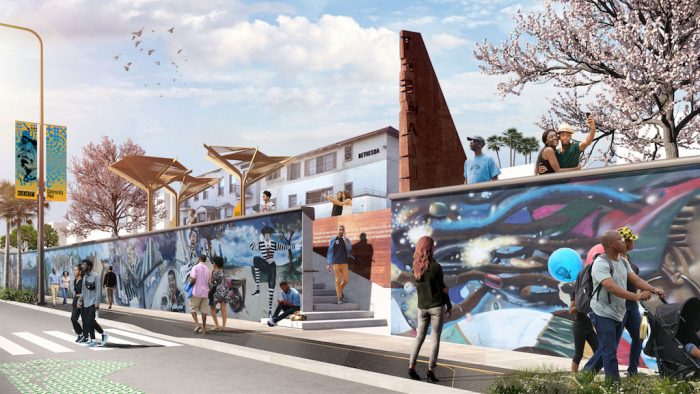 “Destination Crenshaw is first and foremost a celebration of the creativity of the African American community in Los Angeles,” said Zena Howard, the project’s lead architect from Perkins+Will.“Everythingthat we build is simply a backdrop to the innovative, artistic spirit that is alive and thriving here.”
The designs for Destination Crenshaw are pulled together through Grow Where You’re Planted—a unifying theme inspired by the African giant star grass. Used by slavers as bedding in ships, the grass thrives in alien lands despite inhospitable conditions. Today, it remains a profoundly resonant reminder of African American history, the paths of global dispersion, and black resilience in the face of violence and racism. Like the giant star grass, the Black L.A. community has deep roots that sprouted through the surface and spread across the globe. Despite years of disinvestment, Black Angelenos have been able to create a strong, interconnected, and thriving community, deeply rooted in the Crenshaw District and South L.A. This history and resiliency will be reflected in all aspects of Destination Crenshaw.

The Crenshaw District boasts some of today’s most acclaimed Black artists and has been central to the thriving Black L.A. art scene for decades. A first open call for artists was launched in summer 2018 and hundreds of applications were received from local artists for large and small-scale works to be commissioned along the boulevard. A second open call and selections for commissions will be announced in 2019.
Destination Crenshaw has been working for the last two years with major figures in the Black L.A. community to ensure that community voices are incorporated into the project. Project team members include Larry Earl, owner of 1619 Exhibits and former executive director at the Mayme A. Clayton Library and Museum and the Houston Museum of African American Culture; actress, writer, director, and producer Issa Rae; the internationally-renowned artist, gardener, and community activist Ron Finley; deputy director and chief curator of the California African American Museum, Naima Keith; and one of the West Coast’s most innovative hip-hop entrepreneurs Nipsey Hussle. Other women and minority-owned firms Destination Crenshaw is working with include Studio MLA, AMPR Group, RAW International, Bridge Street, Terry A. Hayes and Associates, and Artemis Events Company. See a full list of team members here.
A major public kickoff for Destination Crenshaw will be held on February 8, 2019. Stay up to date with the project by signing up for the email list at www.destinationcrenshaw.la.
ADVERTISEMENT
ADVERTISEMENT
Categories: Business | Crenshaw & Around | Family | Lifestyle | Local | Metro | News | News (Business) | News (Family) | Political
Tags: Artemis Events Company | Black Los Angeles | California African American Museum | community activist Ron Finley | Councilmember Marqueece Harris-Dawson | Crenshaw Boulevard | Crenshaw/Los Angeles Airport(LAX)Metro Rail Line | Destination Crenshaw | Houston Museum of African American Culture | Hyde Park | Issa Rae | Mayme A. Clayton Library and Museum | Naima Keith | Nipsey Hussle | Perkins+Will | Smithsonian Institution’s National Museum of African American History | Terry A. Hayes and Associates