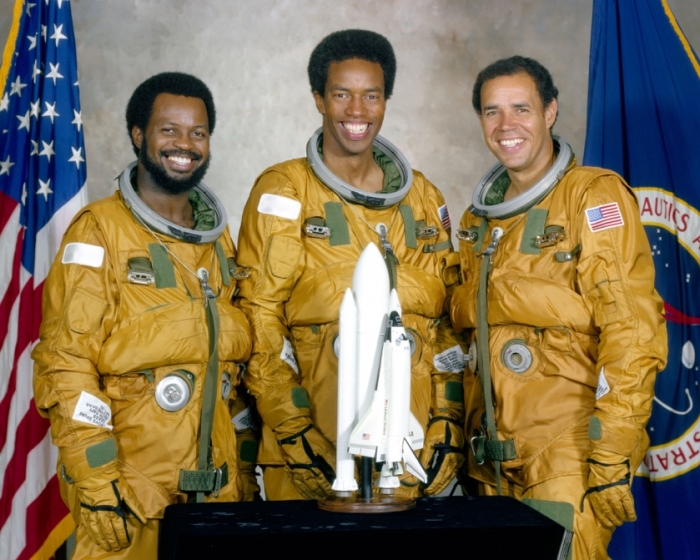 Blacks in space. For a second (admit it) it sounds like a log-line to a buddy comedy that’s being pitched to uber-film producer, Will Packer.

But the truth about the brilliant minds, Black minds, that should have been part of the space race is at the core of the new documentary “Black In Space: Breaking the Color Barrier.” In fact, it rips the bandaid—so to speak—right off, sharing yet another level of discrimination against our people that’s as part of the United States of America as the red, white and blue high waving flag.

I’ll step fully into this statement; the American education system does a consistently poor job of sharing anything but White, male history. Making the statement about history being told by the victorious —leaving the conquered people voiceless.

What do most American kids know about the United States space program? Not much. We know that John Glenn orbited the earth. We know that President John F. Kennedy promised to put a man on the moon by the end of the 1960s. We know that Neil Armstrong made a giant leap for mankind because he said so.

But what’s less widely known is the forgotten chapter of the space story where the race between the US and the Soviet Union waged. Fact, the US space program was all-White and all-male. The idea of putting a person of color in space was not on the menu. In the “Black in Space: Breaking the Color Barrier” it delves into how both countries’ efforts to diversify the growing space corps from the start of the cold war through the Challenger disaster in 1986, which killed seven Americans, including Ronald McNair, who was Black.

In the doc, the filmmakers make it clear that getting into space was dangerous business, tension-filled and that there were high stakes across the board. Another thing that the doc made clear was that America could have (and should have) had a diverse space corps a full decade before the 1978 introduction of Guion Bluford and McNair as well as five women.

There are many frustrating examples of prejudice and racism but one of the most frustrating examples is of Ed Dwight, African-American, a decorated pilot making moves in the early 1960s. His acceptance into Nasa’s program was pushed by the Kennedy White House but he was ultimately not chosen—why?

The film suggests that the pilot, Chuck Yeager, the first man to break the sound barrier, privately lobbied against him based on race.

If these revelations surprise anyone, I venture to state they are white people. America’s consistent policy of blocking opportunities for Blacks — across the board—is the fabric of this country. So it’s not surprising that Nasa had the opportunity to choose a Black astronaut for the Apollo missions and they didn’t.

Is “Black In Space: Breaking the Color Barrier” a doc filled with what could’ve and should’ve antidotes—yup—but there is a feeling of hope and respect.

One of the key events in America’s history during the 20th century was the cold war, the space program and the fight for civil rights all of which are part of this documentary with some added layers and facts that were (until now) unknown.

Another interesting aspect of the doc is the suggestion that adding two men of color — by Arnaldo Tamayo Méndez (with a Soviet crew in 1980) and Bluford three years later – weren’t coincidental.

The film was also clear that including a black man into the space journey was part of a well-designed campaign of approved national propaganda.

“Black In Space: Breaking the Color Barrier” is a very important marker, a reminder of Black history is American history whether “they” like it or not.