Included in the project is 4.25 miles of new bike lanes.

“Our city streets are bustling with life, and we owe it to Angelenos to make sure they are safe, vibrant places that everyone can enjoy,” Garcetti said. “The MyFigueroa project is a major upgrade to more than four miles of our busiest streets — making the trip from downtown to South L.A a safer, more enjoyable experience for all.”

“As part of our DTLA Forward Initiative, MyFigueroa provides a key connection with other complete street projects we are executing, like Spring and Main Forward,” L.A. City Councilman Jose Huizar said. “As downtown’s resurgence continues and the number of residential units, visitors and new businesses continue to grow, we need forward-thinking transportation options that allow all transit users to feel safe and to thrive, including our bike, pedestrian and public-transportation users.”

MyFigueroa was funded by a $20 million Infill Infrastructure Grant from the State of California funded by Prop 1C. 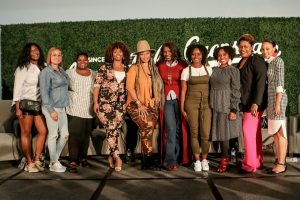