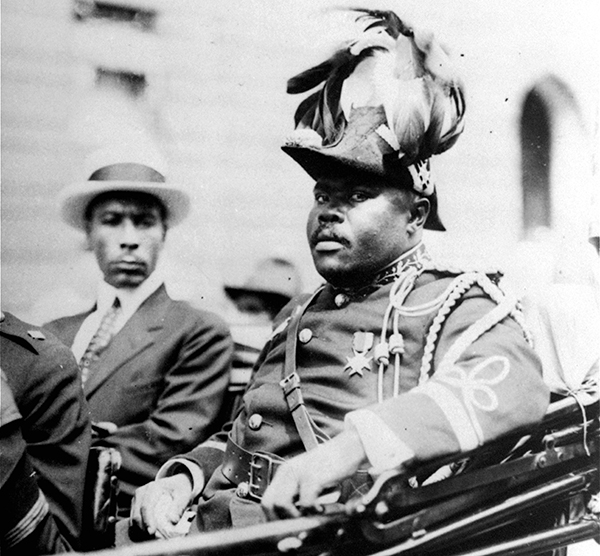 FILE – In this August 1922 file photo, Marcus Garvey is shown in a military uniform as the “Provisional President of Africa” during a parade on the opening day of the annual Convention of the Negro Peoples of the World along Lenox Avenue in Harlem borough of New York. The son ofMarcus Garvey on Aug. 17, 2016, said his father’s 129th birthday marked the perfect day to begin a public push for a presidential pardon to exonerate Garvey for an unjust conviction. Dr. Julius W. Garvey wants President Barack Obama to clear his father’s name from a mail fraud conviction that caused Marcus Garvey to be deported from the United States to his native Jamaica. (AP Photo/File)

The younger Garvey said he has lived his whole life with the fact that his famous father was a convicted criminal, which he believes is part of the reason his father is less well-known and accepted among mainstream Americans.

Because of the conviction, “there is still a whiff of subversion about the idea of being” a fan of his father’s teachings, Garvey said at a news conference at the National Press Club.

Marcus Garvey was born in Jamaica on Aug. 17, 1887, and was considered by people like Martin Luther King Jr. and Malcolm X to be a father of the civil rights movement. He inspired millions of followers worldwide with messages of black pride and self-reliance, and founded the Universal Negro Improvement Association in 1914, considered to be the largest secular organization in African-American history. His Pan-African philosophy urged blacks to return to the continent of their ancestors, and he launched the Black Star Line, a fleet of steamships intended to take them there.

Garvey was also controversial because of his “back to Africa” promotion and his campaign for racial separation, born of the conviction that whites would never allow blacks justice.

He was convicted of mail fraud in 1923 in connection with his steamship line and deported to Jamaica in exchange for being released from prison. He died in London in 1940 and was buried in Kingston, Jamaica.

Garvey’s family, along with supporters and fans, have filed a pardon request with the White House and are waiting to see if Obama will consider the request before he leaves office next year. If not, future presidents will get the same request, they said.

They are hoping to build a groundswell of support for the pardon, given Garvey’s prominent contributions. “Legally, there’s not much more to be done,” said former NAACP President Kweisi Mfume, who attended the news conference. “This is now in the court of public opinion.”