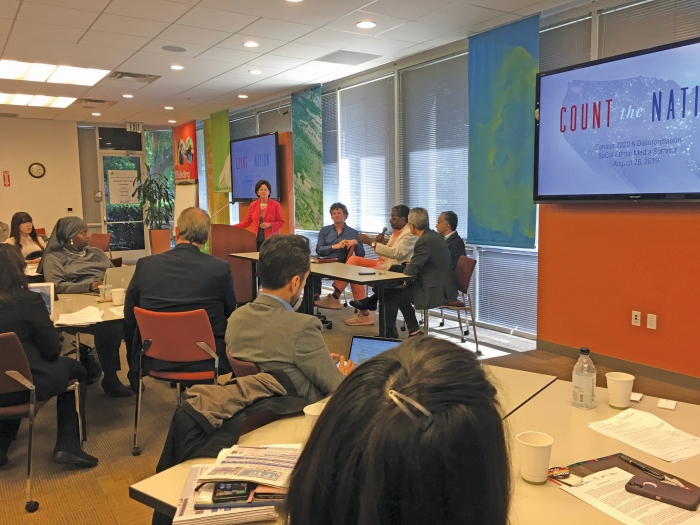 Ethnic media representatives discuss strategies to inform people about the 2020 Census during at summit on Aug. 28 at the California Community Foundation. (Cora J. Fossett/L.A. Sentinel)

With the 2020 Census fast approaching, Southern California’s ethnic media has united to ensure that diverse populations are completely counted.

As mandated by the U.S. Constitution, a census is conducted every 10 years to count the number of people living in the nation and its five territories. Census Day kicks-off on April 1, 2020, and every home will receive an invitation to participate in a short questionnaire by phone, mail and for the first time, online.

Census data is used in several activities such as to determine the amount of federal funding that communities are eligible for, the boundaries of congressional and legislative districts and the number of seats each state will have in the U.S. House of Representatives.  All-inclusive counting of every individual is essential to ensuring that under-represented communities receive their fair share of available resources.

Recognizing that factors like fear and mistrust of the government agencies may dissuade people from responding to the census, more than 100 representatives of L.A.’s regional ethnic media gathered on Aug. 28, to discuss outreach strategies, content sharing and messaging alignment that will lead to educating, engaging and mobilizing diverse communities to participate in the census.

The summit conveners were the Ethnic Media Coalition, California Black Media, La Opinion, Ethnic Media Services and California Community Foundation. The organizations invited a range of experts to share insight on ways to collaborate with government agencies and civic leaders along with discussing some of the challenges that media will face in reporting on the census.

Outlining some of the challenges, Dr. Manuel Pastor said, “About 20 percent of Angelinos are undocumented or live with undocumented individuals. We need to organize and get the hard to count counted. It is really crucial for Los Angeles to get this right or we won’t be able to address our problems.”

Pastor, who is a Distinguished Professor of Sociology, American Studies and Ethnicity at USC, noted that the L.A.-area contains an increase of immigrants from various countries. He said only one-fourth come from Mexico, “followed by China, India, the Philippines, Vietnam, El Salvador, Korea and Guatemala. So, we need to run this campaign in many more languages them in the past.”

Regina Wilson of California Black Media highlighted the fears that some African Americans have about answering census questions.  “I may not want to tell you that I have my brother living with me who just got out of prison because I am getting services and he doesn’t have a place to stay,” she said about Black responders.

Expounding on that point, Dr. Anthony Asadullah Samad added, “California has a massive number of men of color who are coming back into the community and also living in households where the recipient receives social services, which means that [their relatives] put themselves at risk of giving up information that could cause them to lose those social and economic services.”

To combat that apprehension, Samad recommended that the media alert their audiences to Title 13, which is the federal confidentiality clause that prevents the Census Bureau from sharing information with other agencies.

“One of the things we have to do most is making sure that people are proactive in counting themselves. We have to identify who they are, educate them on the fact that the census is coming and what they need to do to be counted,” stressed Wilson.

Gabriel Lerner of La Opinion also emphasized the importance of the ethnic media encouraging their readers to respond to the census. Alluding to the reluctance of many minorities, Lerner said people are frightened by the Trump administration’s approach to immigrants.

“Not only is there a propensity not to participate out of fear, but it is a certainty that our own government does not like us. They don’t want us to participate. The administration is trying to undercount us,” insisted Lerner.

“But, time is of the essence if our goal is to educate our community to help ensure maximum participation and defend the achievements of the last 20 and 30 years in political participation and integration in society-at-large. For this we have our own weapons called G.O.J. – good, old journalism!”