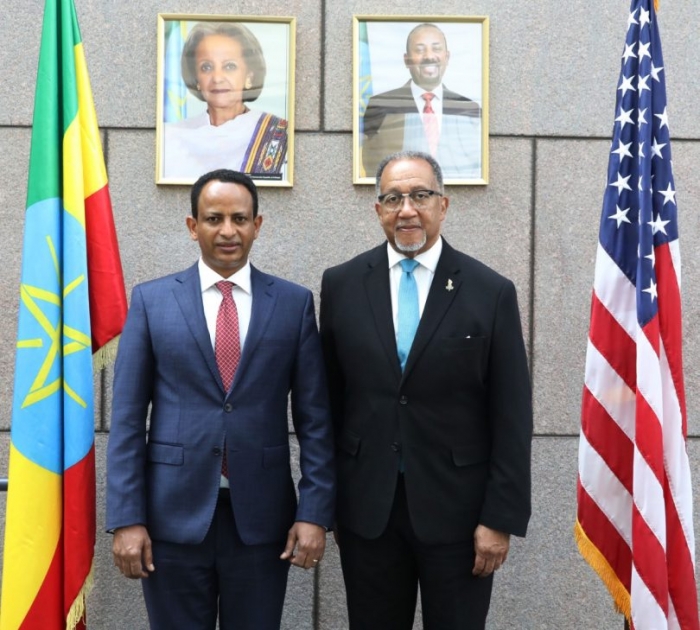 With archaeological findings that date back to around 980 BC, Ethiopia sits along the easternmost peninsula in Africa.

Not only does the culturally rich nation count as Africa’s oldest country, but some believe it’s the oldest in the world.

With a population of 112 million – roughly 70 percent of whom are 30 and under – Ethiopia has never suffered under colonization.

Moreover, unlike most others on the continent, Ethiopia has beaten back all attempts by would-be colonizers.

That and the many current reforms has Fitsum Arega, the Ethiopian Ambassador to the United States, beaming confidently with expectations about the future of his nation.

“There is economic reform, vast investment opportunities in agriculture, manufacturing, and energy,” Ambassador Arega told the Black Press during a meeting at the Ethiopian Embassy in Washington, D.C.

“Ethiopia is an ancient country that takes care of its tradition and culture,” the Ambassador remarked.

“We have a useful population, and that is the force for transformation.”

“We want to engage more in manufacturing which requires labor and skill. Ethiopia is a very good country from the textile business point of view, and we import cotton; we have power that is all generated from green energy.

“Winemaking is good because of our soil and because in the daytime it is hot and at nighttime, it is very cold. So that is good for fermentation, so as you see, we are coming up with so many opportunities. Some we didn’t always know about.”

“The election was the first of its kind in terms of free and fairness,” the Ambassador stated.

He said access to free education, rich agricultural and technology, and the Grand Ethiopian Renaissance Dam – or the GERD – only buoys leaders and citizens’ confidence.

Among Ethiopia’s priorities are sustainable economic development, agriculture, food security, conservation, and sustainable use of natural resources, the Ambassador noted.

“There were people opposed to reform and those still against reform and, as a result, there has been conflict where half the people in the northern part have been displaced,” Ambassador Arega explained.

“We have to bring them back to their former way of life; that is a priority,” the Ambassador insisted. “We have a home-grown economy reform program where we are enabling the private sector to play more of a role. In the past, the public sector played a big role.”

Before the COVID-19 pandemic, Ambassador Arega noted that Ethiopia had invested heavily in infrastructure and built the fastest electric railway over rugged terrain.

“We want to build on democracy,” Ambassador Arega declared, noting that everyone is proud that the African Union continues to headquarter in the Ethiopian capital, Addis Ababa.

“We want to ensure that the aspirations of the people are sustained and engage all opposing parties and those with different views.”

The Ambassador, who twice met with NNPA President and CEO Dr. Benjamin F. Chavis, Jr., said the Black Press of America help must tell Ethiopia’s story of reform and prosperity.

Dr. Chavis announced, “I am so very pleased to state on-the-record that the Black Press of America via the NNPA is now in the process of establishing a strategic media partnership between the NNPA and the Ethiopian Press.

“Our two trade associations will work together henceforth on economic sustainability interests, international media relations in print, digital and social media, and on sponsoring mutual trade delegations between the United States and Ethiopia with specific focus on Black-owned businesses in America and in Ethiopia.

“This will be another answer to the centuries-long prayers of all people of African descent for global unity, progress and empowerment.”

Others, he demanded, refuse.

“I went to Congress to discuss the GERD issue, and one of the congressmen opened a New York Times article [quoting just one farmer in Egypt], who complained about what we are doing,” Ambassador Arega demurred.

“We’ve been sending many things to help balance the stories, but they don’t.”

In 2011, Ethiopia announced to build a hydroelectric dam on its Abbay River, known to outsiders as the Blue Nile or Nile River.

The dam was named the Grand Ethiopian Renaissance Dam (GERD) because it was designed to bring about the economic and renewal of Ethiopia, Ambassador Arega told NNPA Newswire.

In an op-ed, he wrote that the GERD would be the largest hydropower dam in Africa.

When completed, it is expected to generate more than 5,000 MW installed power generation capacity and will have more than two times the capacity of Hoover Dam.

The total capacity of the reservoir is 74 billion cubic meters to be filled over several years. It will cost nearly $5 billion to complete the dam, Ambassador Arega continued.

The GERD has now reached 81 percent completion, including 98.5 percent of civil, 55 percent electromechanical, and 55.3 percent of the hydroelectric structure.

“Ethiopia generates 85 percent of the Nile River flow, but colonial-era and postcolonial agreements on the Nile, to which Ethiopia was not a party, have given Egypt the disproportionate amount of water while giving Sudan a lesser amount,” the Ambassador wrote.

“These agreements gave zero water allocation to Ethiopia. Egypt today wants to keep the old colonial arrangement in place in one form or another.”

According to a 2018 World Bank report, “About 70 percent of the population in Ethiopia live without electricity.”

The GERD aims to provide access to electricity to more than 60 million Ethiopians and provide affordable electricity to the service, industrial and agricultural sectors.

“Therefore, for Ethiopia, building the GERD is not a matter of choice, but an economic and developmental necessity and the way out of poverty for a nation of 112 million people.”