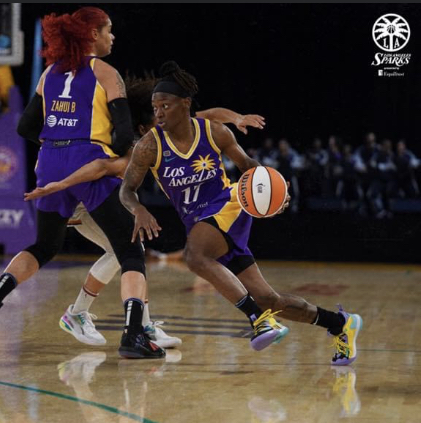 The new Spark Erica Wheeler has 1500 career points. This milestone is a significant accomplishment for her; she’s overcome adversity to reach this point in her career.  She finished the game with 18 points and ten assists as the Sparks beat the Mercury 85-80. It was Wheeler’s first career double-double, a testament of how much she is loving Los Angeles.

The undrafted All-Star activated her clutch gene and had 10 of her 18 points in the fourth quarter. Sparks coach Derek Fisher said, “This is only the beginning for her. She’s committed to learning how to run a team, how to do what she did tonight. She’s figuring out how to get teammates they need. This is really the beginning of what Erica is capable of doing.”

The Sparks are top 5 in defense, so Wheeler wants people to lose the misconception of them being soft because they are in L.A. “It’s L.A. We in Hollywood. People think we soft because we look good and like to dress nice. We’re a scrappy team. For me, that’s giving me the confidence to play with my heart.”

Every day Wheeler is asking questions, trying to help the team get better. Fisher states.” She has the ability and the confidence to make plays in late games. We need that. She was great tonight.” Early in the season, she’s showing the work that she put in during the offseason is paying off. Wheeler is currently leading the WNBA in clutch points per game.

The Sparks guards and wing players were committed to the offensive rebounding, which contributed to their victory. Fisher and the coaching staff have been asking them to step up, and they did for their teammates.

To get the win, everyone had to contribute to the victory. With Fisher’s new lineup, Sparks defensive leader Britney Sykes can expand her game and use her offensive ability. Sykes finished with 14 points and nine rebounds. Although the role she has now was completely different last year, she has many opportunities to maximize her talents. Fisher credits her ability to keep her mental health together.

Sparks are playing shorthanded, but they are using it to their benefit and playing with no excuses. When their team gets back at full strength, they will look to become stronger as a unit.

They are currently 5-5 and will host the Mercury on Friday for a rematch. 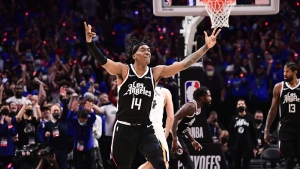 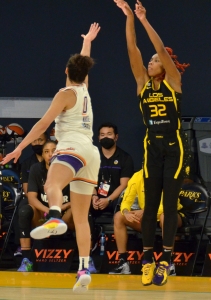 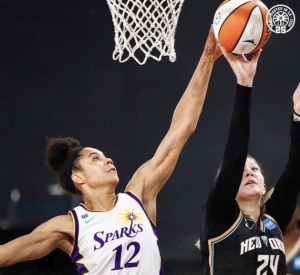 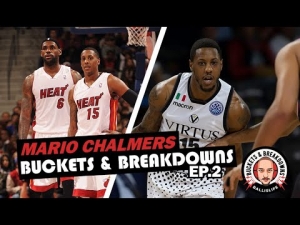 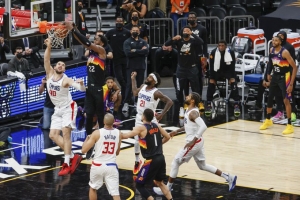