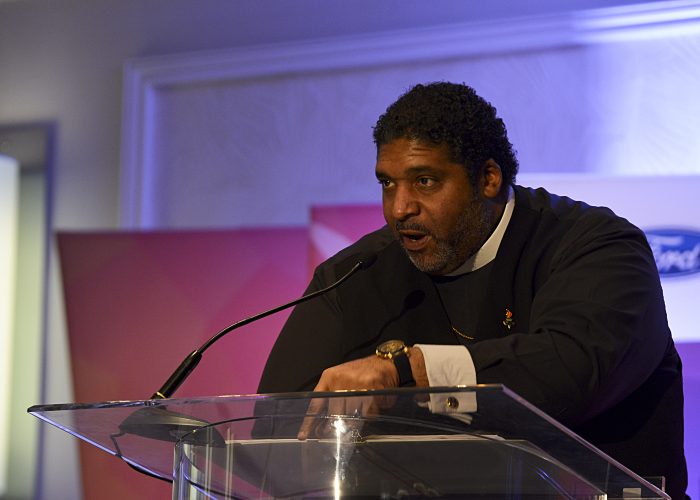 Rev. Dr. William J. Barber II has earned his status as one of the nation’s leading civil rights advocates. Having launched initiatives like “Moral Mondays” to resist extremist retrogressive agendas and the re-launching of the 1960’s “Poor People’s Campaign,” Barber has remained front and center at movements that not only call out racism and inequality, but also seek to better the lives of the poor and downtrodden.

This month, Barber was among 25 other distinguished individuals selected to receive the prestigious 2018 McArthur Foundation “Genius Grant.”

African-American writer John Keene, who explores the impact of historical narratives on contemporary lives and re-imaging the history of the Americas from the perspective of suppressed voices, was also among the recipients.

“It is a deep and profound honor and overwhelming surprise to receive this award. It inspires me to keep working, keep standing, keep loving and to continue working for the cause of justice,” Rev. Barber told Ebony Magazine.

“The moral crises of our time are the interlocking evils of systemic racism, poverty, ecological devastation, the war economy, and the false, distorted moral narrative of so-called ‘religious nationalism.’”

“I, along with others, believe that only a moral fusion movement can work to change these realities,” Barber said.

A pastor and social justice advocate, building a broad-based grassroots movement grounded in the moral tenets of faith-based communities and the United States Constitution to confront racial and economic inequalities in America today, Barber’s reach extends far beyond his duties at Greenleaf Christian Church in Goldsboro, North Carolina.

For more than a dozen years, Barber served as president of the North Carolina conference of the NAACP.

“He is effective at building unusually inclusive fusion coalitions that are multiracial and interfaith, reach across gender, age and class lines, and are dedicated to addressing poverty, inequality and systemic racism,” MacArthur officials said in a news release.

The Moral Monday marches and associated nonviolent acts of civil disobedience grew to involve tens of thousands of participants across North Carolina and have spread to other states. The movement waged successful legal challenges to voter suppression and racial gerrymandering and engaged in massive voter registration and education efforts.

“They called me. I told them to stop playing. I thought it was a prank,” Barber told NPR about first hearing he was the recipient of the $625,000 grant.

“Then they said, no, this is for real. Then the next thing for me was tears. I thought about all the things that my parents have done and sacrificed and all of the years of just working and trying to serve. It was kind of overwhelming,” he said.

“And, you know, especially when – in the work I do, a lot of times, people are very, very nasty in their criticisms. They say you’re doing it for money. You’re doing it for attention. They question your motives when the reality is, you know, you just want to love people and see justice. You want to see people have voting rights and people have health care and people treated right regardless of their race, their color, their creed, their sexuality. So, a gift like this says somebody else sees what you’re trying to do, and they want to be a part of you continuing to do that work.

“So, when they told me that the announcement had come out, I was actually in custody from standing with low-wage workers and nurses and people working at McDonald’s. And that’s what I was doing.”