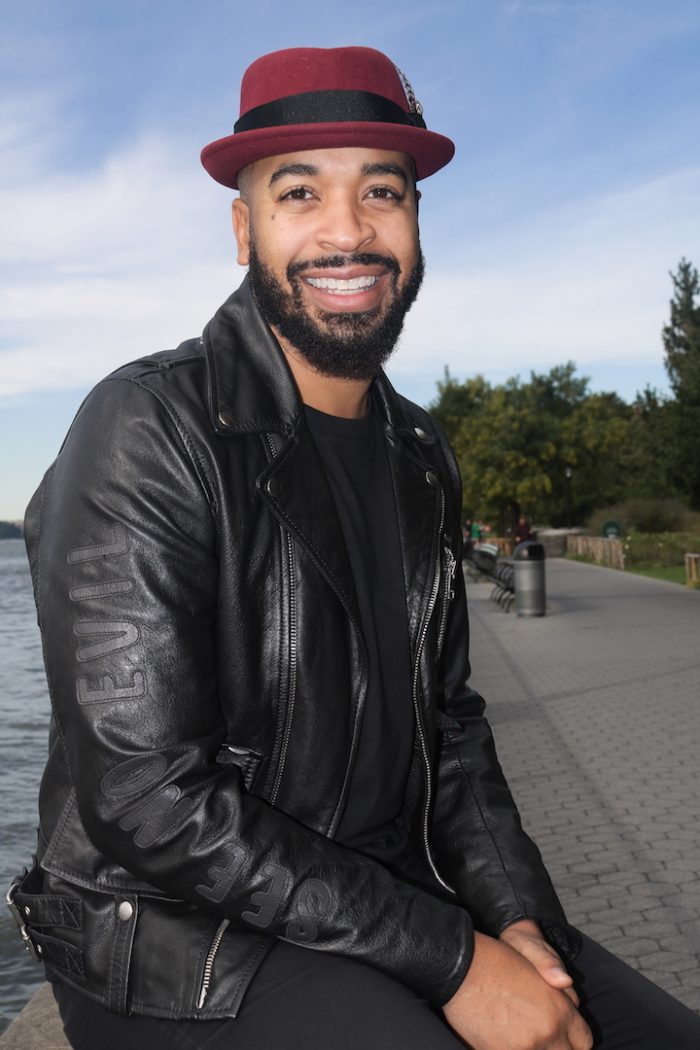 His first publication, Bleu Magazine, came out of some frustration in Johnson’s career in the music industry. After graduating from Seton Hall University where he studied Business and Communications, Johnson worked as an assistant at Def Jam Records. He worked there for seven years going from assistant to coordinator to product manager. Even though Johnson likes and listens to Hip-Hop, he felt like the images that he was putting out didn’t reflect him.

“I was part of a machine that put out images of artists, specifically Hip-Hop artist, which are usually Black of Brown. The images that we put out didn’t always reflect who I thought I was as a Black man, so I created my own side hustle,” said Johnson. “I think that there should be media that covers Hip-Hop. The magazine came out of my desire and need to add to that and show more representation of Black men in media.”

One night in 2005, Johnson and a few friends got together in Harlem for drinks and decided that they would make this magazine happen. Johnson was only 29 at the time, but had built relationships with people working in entertainment and media during his years at Def Jam. The vision for Bleu Magazine was a magazine that would celebrate Black men who are entrepreneurs, creatives and professionals. There is also content on men’s style, grooming and current events.

The magazine’s first issue dropped in 2006. Even though that was the only issue published that year, the year was still successful and filled with learning experiences. Johnson was serious about making sure that it would be a respectable print publication. Starting out, his writers were friends and volunteers, but they also all had English, Journalism or Communications degrees. Johnson, himself, went back to school midway through launching the magazine and received a master’s degree in Journalism from Harvard University.

“I respect Black people working in media and especially print media. It’s something about being able to touch those pages with Black and Brown faces on them,” said Johnson. “I always wanted to be more than a blog. I wanted to be a respectful to journalism, so I took the time to really study the business of it and all of my writers are people with English degrees, Journalism degrees and Communication degrees.”

While Johnson has a passion for print media, Bleu Magazine is online and on social media outlets including Facebook, Instagram and YouTube as well. In 2016, Johnson also decided to add on an online publication that would cater to Black women. Bombshell celebrates women for being smart, creative and bold entrepreneurs. There are aspects of beauty and style on the website, but the mission is to celebrate women for their inner-qualities and brave actions.

Johnson spreads his network further with his Connect-Us panel events. These events connect creatives with people who work behind the scenes like lawyers, marketers and branding agents. It also has a goal to connect Millennials and Generation X. Outside of media and journalism, Johnson is all about being well-groomed. He sells a subscription box of men’s grooming products, called Beauxbox. The box comes every other month with five to ten samples of grooming products made for Black men. Sometimes, the box even includes gadgets or clothing items.

Bleu Magazine remains Johnson’s primary business, however. The magazine publishes four times a year and is distributed all over the country as well as internationally in the United Kingdom and France. It also has advertising partnerships with Lexus and BMW and has had some celebrities on its covers including Matt Barnes, J.R. Smith, Ryan Leslie and more. For more information about the magazine, visit bleumag.com. You can also find Bombshell at bombshellbybleu.com and Beauxbox at www.beauxbox.co.