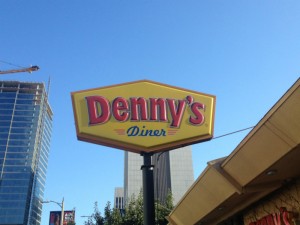 This Denny’s on Vermont and Wilshire in Koreatown is where a black couple was asked to pay for their order in advance. Their lawsuit against the establishment claims they were the only customers asked to do so. (file photo)

A black couple and Denny’s Inc. reached a mid-trial settlement on February 4 in the pair’s lawsuit alleging the manager of the restaurant chain’s Koreatown location discriminated against them by demanding that they pay for their food in advance.

The resolution came just before the third day of testimony was scheduled to begin in trial of the lawsuit filed in Los Angeles Superior Court against Denny’s and manager Ali Rahman in August 2014 by Henry Williams and Renee Hebert. Judge Michael Raphael dismissed the jury hearing the case.

The couple declined to comment on the settlement, as did the lawyers on both sides, who said the terms were confidential.

The couple alleged Rahman, the manager of the Denny’s on Vermont Avenue just north of Wilshire Boulevard, targeted them because of their skin color.

Their lawyers said the pair entered the restaurant about 4:15 p.m. on May 7, 2014, and that no other customers were asked to pay in advance for their meals. They also said Williams and Hebert waited far longer than other guests to receive their food.

An internal restaurant video of the incident has been viewed more than 5,000 times since being uploaded to YouTube.

Michael Stein, an attorney for Denny’s and Rahman, said the manager made a mistake with his demand, apologized to the couple and offered to return the $80 Williams gave him.

He said Rahman was concerned after learning from the couple’s server about the size of their order, which totaled more than $83, because the Koreatown location had prior problems with people leaving without paying.

But lawyers for Williams and Hebert said the retraction of the pre- payment demand did not shield Rahman and the restaurant chain can escape liability because it violated both state law and Denny’s own internal rules.

In 1994, Denny’s agreed to pay more than $54 million to settle lawsuits filed by thousands of black customers who had been refused service or been forced to wait longer or pay more than white guests.