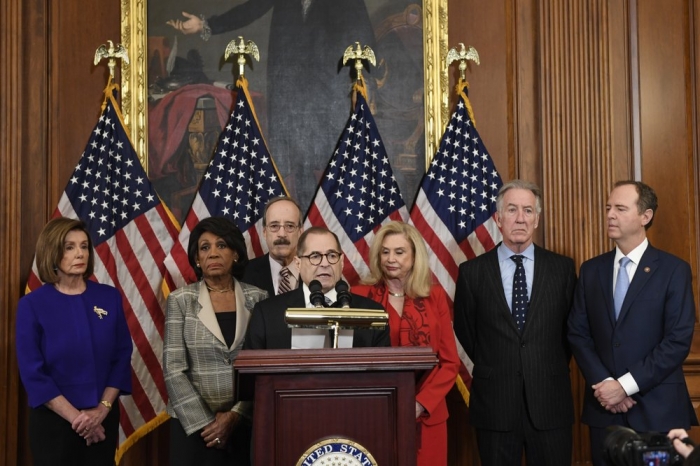 House Democrats announced two articles of impeachment against President Donald Trump on Tuesday, declaring he “betrayed the nation” with his actions toward Ukraine as they pushed toward historic proceedings that are certain to help define his presidency and shape the 2020 election.

The specific charges aimed at removing the 45th president of the U.S.: Abuse of power and obstruction of Congress.

Speaker Nancy Pelosi, flanked by the chairmen of impeachment inquiry committees at the U.S. Capitol, said they were upholding their solemn oath to defend the Constitution. Trump responded angrily on Twitter: “WITCH HUNT!”

Voting is expected in a matter of days by the Judiciary Committee, which begins deliberations Wednesday, and by Christmas in the full House. The charges, if approved, would then be sent to the Senate, where the Republican majority would be unlikely move to convict Trump, but not without a potentially bitter trial just as voters in Iowa and other early presidential primary states begin making their choices.

In the formal articles announced Tuesday, the Democrats said Trump enlisted a foreign power in “corrupting” the U.S. election process and endangered national security by asking Ukraine to investigate his political rivals, including Democrat Joe Biden, while withholding U.S. military aid as leverage. That benefited Russia over the U.S., as America’s ally fought Russian aggression, the Democrats said.

Trump then obstructed Congress by ordering current and former officials to defy House subpoenas for testimony and by blocking access to documents, the charges say.

By his conduct, Trump “demonstrated he will remain a threat to national security and the Constitution if allowed to remain in office, ” the nine-page impeachment resolution says.

“If we did not hold him accountable, he would continue to undermine our election,” Pelosi said later at a forum sponsored by Politico.

“Nothing less is at stake than the central point of our democracy – a free and fair election.’’

Trump tweeted that to impeach a president “who has done NOTHING wrong, is sheer Political Madness.”

He later headed to Pennsylvania for a reelection campaign rally, where he called the effort “impeachment lite” and promised it would lead to his reelection in 2020.

The outcome appears increasingly set as the House presses ahead toward impeachment as it has only three times in history against U.S. presidents, a test of the nation’s system of checks and balances.

Democrats said they had a duty to act in what is now a strictly partisan undertaking, as Republicans stand with the president because Trump has shown a pattern of behavior that, if left unchecked, poses risks to the democratic process.

Rep. Jerrold Nadler, D-N.Y., the Judiciary chairman, said the president “holds the ultimate public trust. When he betrays that trust and puts himself before country, he endangers the Constitution; he endangers our democracy; he endangers our national security.”

“No one, not even the president, is above the law,” he said, announcing the charges before a portrait of George Washington.
Chairman Adam Schiff of the Intelligence Committee said, “We stand here today because the president’s abuse of power leaves us with no choice.”

Trump’s allies immediately plunged into the fight that will extend into the new year. White House Press Secretary Stephanie Grisham said Democrats are trying to “overthrow″ the administration. Campaign manager Brad Parscale said Democrats “don’t have a viable candidate for 2020 and they know it.” The president’s son, Eric, embraced his father’s penchant for name-calling, assailing Pelosi and “her swamp creatures.”

Senate Majority Leader Mitch McConnell said he would be “totally surprised″ if there were 67 votes in the chamber to convict Trump, and signaled options for a swift trial. He said no decision had been made whether to call witnesses. 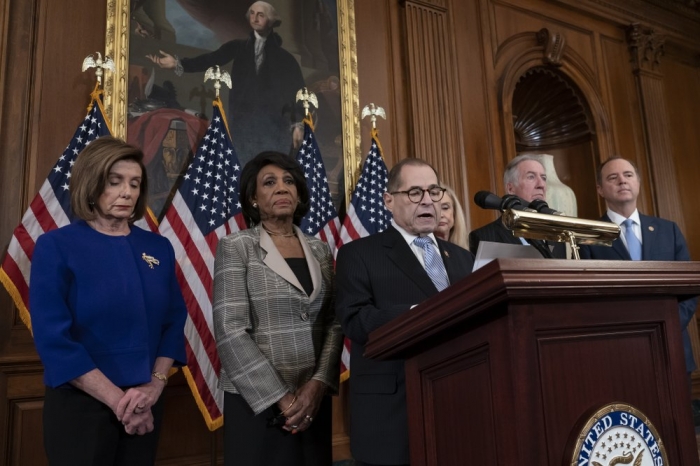 In drafting the charges against the president, Pelosi faced a legal and political challenge of balancing the views of her majority while hitting the Constitution’s bar of “treason, bribery or other high crimes and misdemeanors.”

The final resolution, slim in length yet broad in concept, attempted to find common ground by linking the Ukraine inquiry to the Mueller probe in two separate lines. It said the abuse of power was consistent with Trump’s “previous invitations of foreign interference in United States elections,” while the obstruction charge was consistent with his efforts to undermine U.S. government “investigations into foreign interference.”

Democratic leaders say Trump put his political interests above those of the nation when he asked Ukraine President Volodymyr Zelenskiy in a July phone call to investigate his rivals, including Democrat Joe Biden, and then withheld $400 million in military aid as the U.S. ally faced an aggressive Russia. They say he then obstructed Congress by stonewalling the House investigation.

The second article, Obstruction of Congress, says that Trump directed defiance of the House’s ability to conduct its legal oversight like no other president “in the history of the republic.”

Trump insisted in a new tweet that when he asked Ukraine’s president “to do us a favor” with the investigations, “us” is a reference to USA, not me!” Democrats, however, say Trump’s meaning could not have been clearer in seeking political dirt on Biden, his possible opponent in the 2020 election.

Republicans stand with the president even if they don’t fully address his actions. House GOP Leader Kevin McCarthy said, the vote would be on impeachment not “whether a call is perfect.″

While the impeachment is focused on the Ukraine matter, Trump’s actions toward Russia continue to underlie the debate. On Tuesday, Trump met at the White House with Sergey Lavrov, the Russian foreign minister just back from Paris efforts to revive peace talks with Ukraine.

At the same time, a top adviser to the Ukraine president, Andriy Yermak, disputed key impeachment testimony from U.S. Ambassador Gordon Sondland, telling Time magazine the two did not speak of the investigations Trump wanted during a Warsaw meeting.

The next steps are expected to come swiftly after months of investigation into the Ukraine matter and special counsel Mueller’s two-year Russia probe.

In his report, Mueller said he could not determine that Trump’s campaign conspired or coordinated with Russia in the 2016 election.

But he said he could not exonerate Trump of obstructing justice and left it for Congress to determine.

Even as she pushed ahead with the impeachment proceeding, Pelosi announced an agreement with the White House on a new U.S.-Mexico-Canada trade deal, a top priority for the president as well as many centrist Democrats. It too, could get a vote next week.