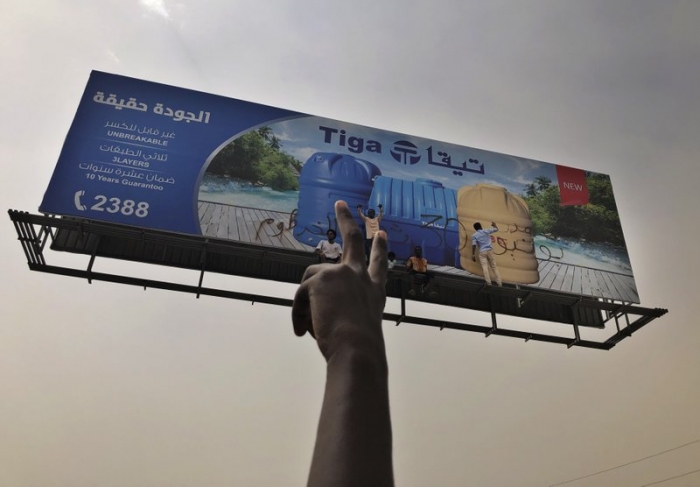 Sudanese protesters write graffiti on a billboard during a demonstration against the military council, in Khartoum, Sudan, Sunday, June 30, 2019. Tens of thousands of protesters have taken to the streets in Sudan’s capital and elsewhere in the country calling for civilian rule nearly three months after the army forced out long-ruling autocrat Omar al-Bashir. The demonstrations came amid a weeks long standoff between the ruling military council and protest leaders. (AP Photo/Hussein Malla)

Tens of thousands of people flooded the streets of the capital, Khartoum, and other areas Sunday in the biggest protests since security forces cleared a sit-in last month. They called for the military to hand over power to civilians following the coup that ousted longtime autocrat Omar al-Bashir in April.

Nazim Sirraj, a prominent activist, told The Associated Press on Monday that three bodies were found next to a school in Omdurman, the twin city of Khartoum. The three were shot dead in an area where security forces had barred protesters from marching toward a hospital and had fired tear gas to disperse them, he said. One wounded person died on the way to the hospital in Khartoum, he added.

Sirraj said the total death toll was 11, including one killed in the city of Atbara, a railway hub north of Khartoum and the birthplace of the December uprising that eventually led to al-Bashir’s ouster.

The Sudan Doctors Committee, the medical arm of the Sudanese Professionals’ Association, which has spearheaded the demonstrations, confirmed the death toll.

Authorities said late Sunday that at least seven people were killed and nearly 200 wounded, including 27 injured by bullets during the demonstrations.

U.N. Secretary-General Antonio Guterres called again Monday “for restraint by all sides and urgent resumption of the political talks towards the establishment of a civilian-led transitional government as soon as possible,” U.N. spokesman Stephane Dujarric said.

The U.N. chief also called for “accountability” for any loss of life by protesters or civilians, Dujarric said.

The U.S. Embassy issued a statement condemning the use of live ammunition against protesters Sunday, saying military authorities should be held accountable for the deaths. It also called for Sudan’s factions to reach agreement immediately on the formation of a civilian-led transitional government.

The ruling military council blamed protest leaders for the deaths after they diverted the routes of marches.

Lt. Gen. Gamal Omar, a member of the council, said in a statement it was regrettable that the Forces for Declaration of Freedom and Change, which represents the protesters, diverted marches toward the presidential palace and the military headquarters.

He said security forces used tear gas to disperse protesters, who hurled stones at them.

Protest leader Mohammed al-Asam said they would continue in their “revolutionary acts” till the military hands over power to civilians.

“The military council has only one option, which is to respond to demands of the Sudanese people,” he said in a video clip posted on the SPA Facebook late Sunday.

The protests came amid a weekslong standoff between the ruling military council and protest leaders. Talks between the two sides over a power-sharing agreement collapsed when security forces violently broke up a protest camp in Khartoum on June 3.

The ensuing clampdown resulted in at least 128 people killed across Sudan, according to protest organizers. Authorities put the death toll at 61, including three security forces.

In a statement late Monday, the FDFC called for a regionally backed investigation into the crackdown since al-Bashir’s ouster April 11.

It also demanded an “immediate” transfer of power to a civilian-led transitional government that would include a Cabinet, legislative body and a sovereign council — the last composed of civilian and military members with limited symbolic powers.