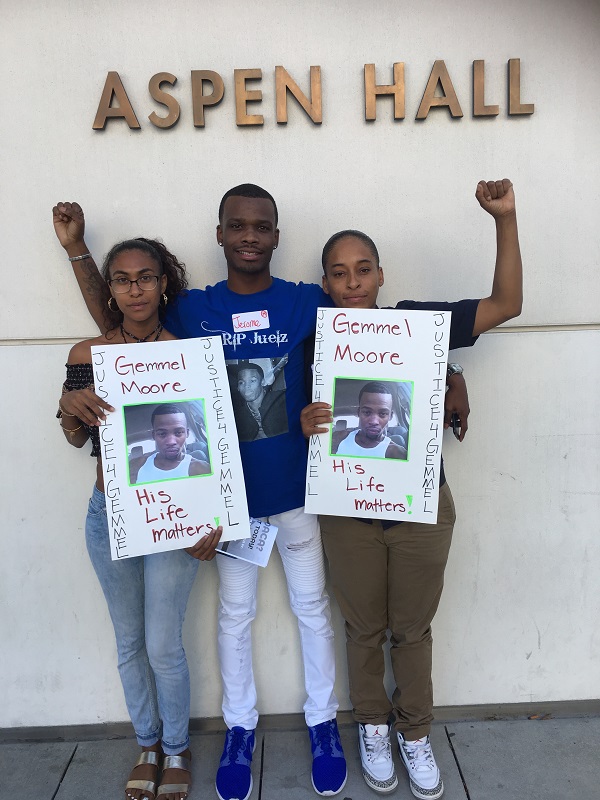 Jasmine Abdullah of the Pasadena chapter of Black Lives Matter told the Commission about what she saw as the reluctant response to Moore’s death.

26-year-old Gemmel Moore was found dead of a crystal meth overdose in prominent Democratic donor Ed Buck’s home on July 27. His death was immediately classified as an accidental methamphetamine overdose by the coroner, but now the L.A. County Sheriff’s Department’s homicide bureau is taking a closer look after his personal journal was published and other young men have stepped forward recounting similar stories about a man who they say has a Tuskegee Experiment like fetish which includes shooting drugs into young Black men that he picks up off the street or via dating hookup websites.

Jerome Kitchen, a 29-year-old African-American gay man who was a friend of Gemmel Moore’s, criticized the Coroner’s Office and Sheriff’s Department for the quick resolution of Moore’s death.

“There was no investigation,” he said. “There was no background check into who Gemmel was or the relationship between Gemmel and the individual in whose home he was found dead in. Right away Gemmel was deemed a black homeless gay sex worker who died of a drug overdose.”

Other testimony included complaints from the LGBTQ community of not being taken seriously when trying to report abuse to law enforcement agencies in the County.

Held Sat., Sep. 23 at Los Angeles Trade Tech College, this was the sixth in a series of public hearings that are being used as opportunities to assist the Commission in strengthening trust between police and communities, and advancing positive intergroup relations through equitable policing practices. Women of color and members of the LGBTQ community were invited to share their experiences of interactions with L.A. County’s over 50 law enforcement agencies, including the Los Angeles Police Department (LAPD), Los Angeles County Sheriff’s Department and Immigration and Customs Enforcement (ICE), and provide recommendations to address policing issues within women of color and LGBTQ communities.

The hearing was held in conjunction with the African American Policy Forum, Gender Justice LA,[email protected] Coalition and the San Fernando Valley’s Somos Familia Valle. The meeting was closed in remembrance of Gemmel Moore.

According to the 2016 Report on the Status of Women in Los Angeles County there are 5.1 million women and girls living in L.A. County. L.A. County has experienced an increase in women of color over the past decade, with the population increasing from 71% in 2006 to 74% in 2014. UCLA Law think tank The Williams Institute estimated in 2016 that out of the 1.3 million LGBT residents in California, over 31% percent live in Los Angeles County.

The County of Los Angeles is the most populous county in the United States. The County is home to more than one-quarter of California residents and is one of the most ethnically diverse counties in the U.S. There are 88 incorporated cities in the County. According to the 2010 U.S. Census, the most populous cities are: Los Angeles, Long Beach, Glendale, Santa Clarita, Lancaster, Palmdale, Pomona, Torrance, Pasadena, El Monte, Downey, Inglewood, West Covina, Norwalk and Burbank.