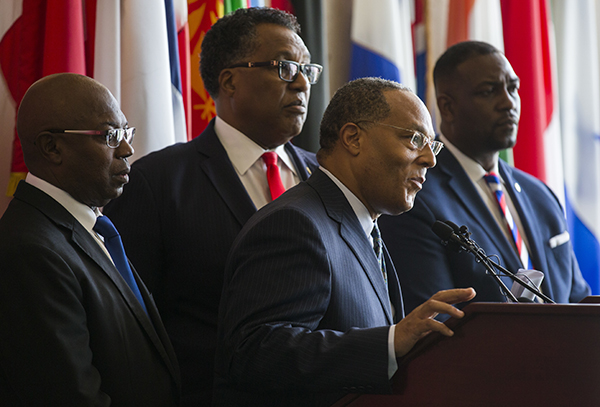 The four black councilmen in Dallas called for the city’s Confederate statues to be removed Friday, saying it will allow the community to start healing from its racist past.

Dwaine Caraway, a councilman who serves as mayor pro tem, held a news conference Friday afternoon with the other three black city councilmen to “present a unified statement” on the statues. Councilman Kevin Felder called the monuments “symbols of racism” and says he has talked with Mayor Mike Rawlings about speeding up a proposed 90-day study by a task force to decide what to do with the statues.

“Taxpayer dollars should not support vestiges of racism, white supremacy and oppression,” Felder said. “I also support the opportunity for the chance for dialogue and action to address the continued discrimination in the city of Dallas in housing, employment, lending institutions _ discrimination in contracting opportunities against black contractors.”

Earlier this week, Rawlings proposed forming a task force that would report back to the city’s Office of Cultural Affairs and make a recommendation to the City Council around Nov. 8 regarding the future of the statues.

The councilmen said removing the statues will not be a permanent fix to Dallas’ racial issues, but they hope it would lead to a larger conversation about the city’s racial climate.

Organizers of a rally against white supremacy said they expect thousands to show up for the event Saturday at Dallas City Hall plaza, a short distance from the city’s Confederate War Memorial. The monument has a large stone pillar with an anonymous Confederate soldier on top. Stone statues of four leaders of the Confederacy sit at each of the pillar’s four corners. The statues are of Jefferson Davis, Gen. Robert E. Lee, Gen. Stonewall Jackson and Gen. Albert Johnston.

The monument was dedicated in 1896 by the United Daughters of the Confederacy. It was in a park but was moved to its current location in the 1960s to make way for R.L. Thornton Freeway. Petitions have circulated in the last few years and a renewed push was made this week to rename the freeway that gets its name from a former Dallas mayor and prominent member of the local Ku Klux Klan.

Supporters of keeping the Confederate monuments have posted that they plan to be at the rally Saturday. It’s not clear whether an organized counter-protest is expected.

Police and city officials said in statements this week that they are preparing to have increased officer presence and some road closures as a result of the rally.

The councilmen said Friday that the city is prepared to “shut it down” if any violence erupts.