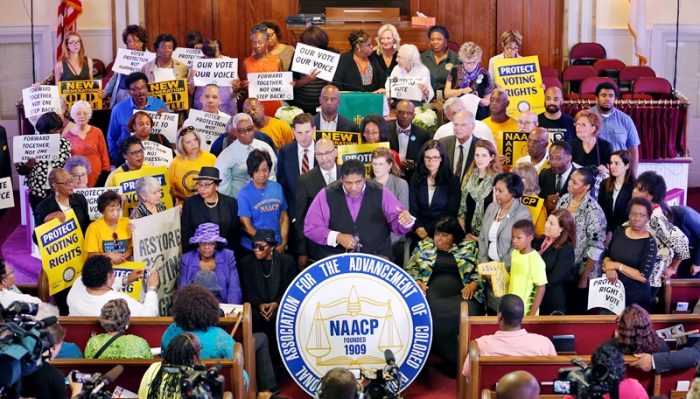 North Carolina NAACP president, Rev. William Barber, center at podium, gestures as he is surrounded by supporters during a news conference at the Third Street Bethel AME Church in Richmond, Va., Tuesday, June 21, 2016. The press conference was held to talk about the appeal before the 4th U.S. Circuit Court of Appeals on North Carolina’s major rewrite of voting laws in 2013. (AP Photo/Steve Helber)

A federal appeals court on Friday blocked a North Carolina law that required voters to produce photo identification and follow other rules disproportionately affecting minorities, finding that the law was intended to make it harder for blacks to vote in the presidential battleground state.

The Virginia-based 4th Circuit Court of Appeals declared that the measures violated the Constitution and the federal Voting Rights Act by targeting black voters “with almost surgical precision.” It marks another ruling in less than two weeks against voter ID laws, along with court decisions regarding Texas and Wisconsin.

Friday’s opinion from a three-judge panel states that “the legislature enacted one of the largest restrictions of the franchise in modern North Carolina history” when it rewrote voting laws in 2013.

The appeals court also dismissed arguments by Republican lawmakers that the law was aimed at preventing voter fraud.

“Although the new provisions target African Americans with almost surgical precision, they constitute inapt remedies for the problems assertedly justifying them and, in fact, impose cures for problems that did not exist,” the opinion states.

Opponents of the law say the ruling should increase participation by black and Hispanic voters on Election Day in the state that also has closely contested races for U.S. Senate and governor. The U.S. Justice Department, state NAACP and League of Women Voters were among those who sued over the restrictions.

“This is a strong rebuke to what the North Carolina General Assembly did in 2013. It’s a powerful precedent that … federal courts will protect voting rights of voters of color,” said Allison Riggs, who served as the League of Women Voters’ lead lawyer.

The Rev. William Barber, president of the North Carolina NAACP, said the ruling was “a vindication of our constitutional and moral critique and challenge to the constitutional extremism of our government.”

The decision was lauded by Democratic Party presidential nominee Hillary Clinton and Attorney General Loretta Lynch, but decried by Republicans including Gov. Pat McCrory as an effort to tilt the electoral balance in the November elections.

North Carolina legislative leaders Senate leader Phil Berger and House Speaker Tim Moore, both Republicans, issued a statement that they would appeal the ruling to the U.S. Supreme Court and blasted the judges as “three partisan Democrats.”

“We can only wonder if the intent is to reopen the door for voter fraud, potentially allowing fellow Democrat politicians … to steal the election,” they said.

All three panel members were appointed by Democratic presidents.

However, it’s unlikely that the evenly divided and short-handed Supreme Court would take the case or block Friday’s ruling from governing elections this November, said election-law experts Ned Foley of Ohio State University and Richard Hasen of the University of California at Irvine.

Later in the day, a federal judge in Wisconsin upheld that state’s voter ID law but threw out a number of GOP-written statutes that restricted voting.

Earlier this month, a federal appeals court ruled that Texas’ strict voter ID law is discriminatory and must be weakened by November. That followed a ruling by a federal judge in Wisconsin that residents without a photo ID will still be allowed to vote.

Hasen said the Obama administration took on the North Carolina and Texas cases as a bulwark against voting restrictions.

“If North Carolina and Texas could get away with these voting restrictions, it would have been a green light for other states to do so,” he said. “I think this is a hugely important decision.”

North Carolina’s voting laws were rewritten in 2013 by the General Assembly two years after Republicans took control of both legislative chambers for the first time in a century. It was also shortly after a U.S. Supreme Court ruling changed the requirement that many Southern states receive federal approval before changing voting laws.

The voter ID mandate, which took effect in March, required people casting ballots in person to show one of six qualifying IDs, although voters facing “reasonable impediments” could fill out a form and cast a provisional ballot.

The appeals court cited data that these methods were used disproportionately by black voters, who also were more likely to lack a qualifying ID, and it blocked the contested provisions of the law.

The judges wrote that in the years before the North Carolina law took effect, registration and participation by black voters had been dramatically increasing.

“We recognize that elections have consequences, but winning an election does not empower anyone in any party to engage in purposeful racial discrimination,” the panel said.

The Rev. Moses Colbert, a 61-year-old pastor at a church in Gastonia, said the elimination of same-day registration ensured that he couldn’t vote on Election Day 2014 shortly after moving within North Carolina. He’d sought to change his voter registration at the Department of Motor Vehicles, but the update didn’t get to county officials by the election.

He was told his name wasn’t on the rolls where he’d just moved. But when he drove 20 miles back to the county where he was registered before, election workers turned him away because of the new address on his license.

“I was stunned. I’m only two generations away from slavery,” said Colbert, who is black. “This is a privilege every American needs to be allowed to exercise.”