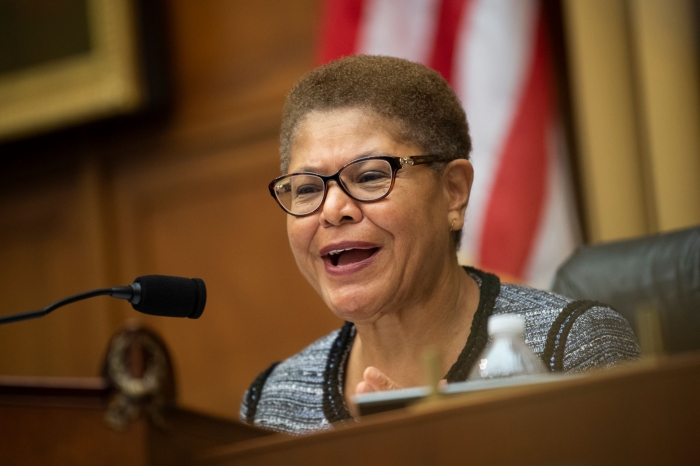 George Floyd was murdered on the streets of Minneapolis on May 25, 2020.  His murderer, Derek Chauvin, has now been convicted of the crime and the other three officers charged in his murder are awaiting trial.  The killing of George Floyd brought to light the reality that so many African Americans and people of color know to be our truth, America has yet to make the sweeping policing policy changes that so many took to the streets to demand for just over one year ago.

Congress has passed legislation calling for sweeping reform, but currently, this bill has been stalled in the U.S. Senate because of the Republican’s refusal to make the changes that so many have demanded. Congresswoman Karen Bass (D-Calif.) of Los Angeles has been the lead negotiator in bringing forth this legislation on behalf of Congress.  She has been tasked with negotiating with or against (depending on what side of the isle you sit on) with Republican Senator Tim Scott of South Carolina.  These negotiations over policing reform have intensified after lawmakers announced that they had missed last Tuesday’s deadline to pass federal legislation — a target President Joe Biden and top legislators were hoping to meet.

Biden, in his joint address to Congress in April, urged lawmakers to bring the policing reform bill to his desk to sign into law by the anniversary of Floyd’s death. 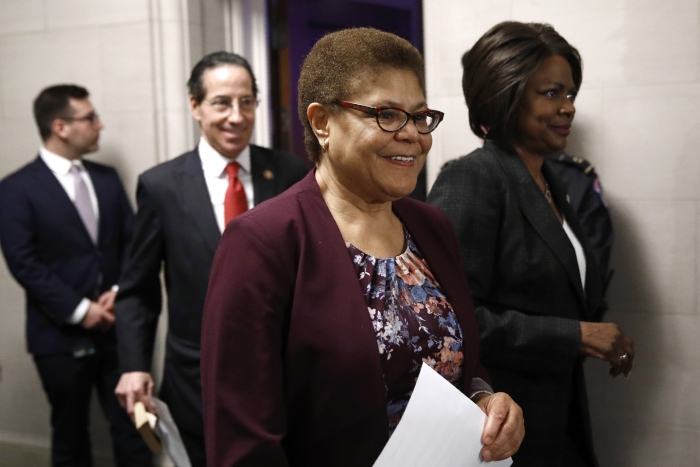 In a primetime interview aired on ABC News’ “Soul of a Nation,” on Tuesday, Rep. Bass expressed her disappointment in Congress’ inability to reach a deal by the anniversary of Floyd’s death but said she felt confident that she and her fellow legislators will reach an agreement soon.

“It would be wonderful if we had the bill ready in the next few days for the anniversary of Mr. Floyd’s death. However, I know the Floyd family. I know myself and I know all of us here are far more concerned about having a substantive bill that makes serious changes to policing in America. And that is far more important than us making an artificial deadline. Now, having said that, we can’t take forever. We must get this done, but it won’t be done on May 25th,” Bass said, later adding, “I wish it would have happened last year, frankly, especially at the height of the momentum. But it is not the case.”

Following the signal on Friday that Congress was not on track to bring the bill to a vote by the deadline, a White House official told ABC News that Biden and his team are engaged with Congress on this issue and are “giving the negotiators room to work through” the bill.

Congresswoman Bass and Senator Cory Booker, along with Senator Tim Scott, worked feverishly through the weekend to try and bring a bipartisan bill to a vote.  But as of Sentinel press time, this negotiation had not concluded.  The major sticking point appears to be “qualified immunity,” a controversial federal doctrine that protects officers accused of violating the constitution while on duty.

Abolishing the more than 50-year-old doctrine remains one of the main sticking points between Republicans and Democrats over any deal on passing the George Floyd Justice in Policing Act.  But Bass is unwilling to budge or water down this issue.  She has been steadfast in her demand that “qualified immunity” be eradicated if the legislation is going to have any real substance or make any real change. 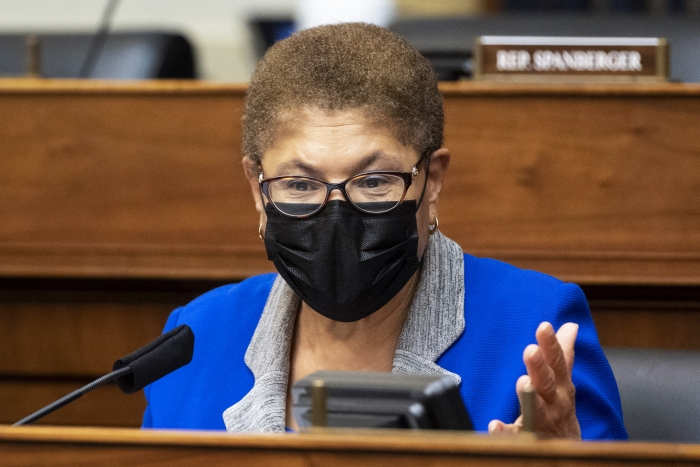 The doctrine was established in response to the Civil Rights Act of 1871, which had been enacted to fight violence by the Ku Klux Klan in the aftermath of the Civil War. A section of that act, now generally known as Section 1983, allows citizens to sue state and local government officials and employees for compensatory damages for violations of their Fourth Amendment rights.

“Bipartisanship is everything if we want to get the bill on President Biden’s desk. The only way to do that is to bring a bipartisan bill in the Senate, and I’m very hopeful that we will be able to accomplish that,” Bass said. “We’ve all been working together.”

Congress passed the George Floyd Justice in Policing Act in March of 2020 and hopes to increase police officers’ accountability by ending no-knock warrants, banning chokeholds, creating a national registry for police misconduct, and seeking to end qualified immunity.   While this legislation has passed in the House of Representatives, it has been held up by Republicans in the Senate and thus, held up from becoming law.  While the Democrats currently do control the Senate with a 50/50 House split with Vice President Kamala Harris serving as the tie breaking vote, this bill would require at least two Republicans to vote in favor of the bill to become law.

Bass, who has been the leading advocate and author of the George Floyd act, reflected on the legacy of Floyd and what his death has meant to the nation.  According to Bass, his murder has brought to this country a reckoning on racial injustice, inequality, and police brutality like never before.  She has pointed out that murders, assaults, and police brutality at the hands of law enforcement have been occurring in communities of color for generations.

“I think one of the legacies of George Floyd is that, up until now, people really have not been willing to admit there was a problem. You can’t address a problem if you don’t believe the problem exists,” Bass told ABC News. 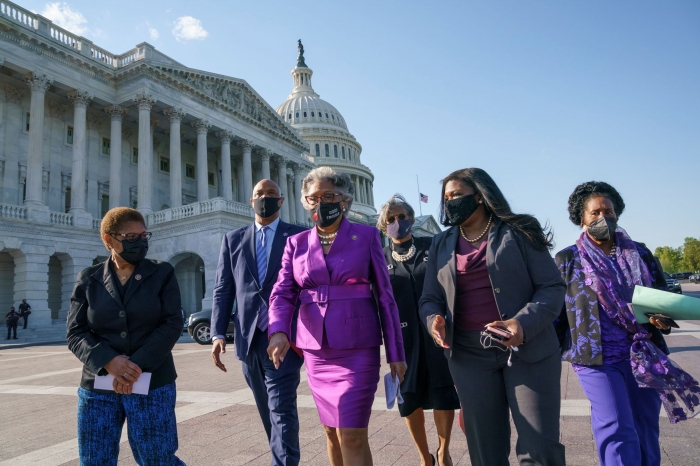 “It would be wonderful if we had the bill ready in the next few days for the anniversary of Mr. Floyd’s death. However, I know the Floyd family. I know myself and I know all of us here are far more concerned about having a substantive bill that makes serious changes to policing in America. And that is far more important than us making an artificial deadline. Now, having said that, we can’t take forever. We must get this done, but it won’t be done on May 25th,” Bass said. (AP Image)

This is not the first time that a police reform bill of this nature has come before the Senate.  A different version of the George Floyd Justice in Police Act passed the House one month after Floyd was killed with only three Republicans voting in support of the bill.  But the proposed legislation failed to advance to a vote in the Senate after then President Donald Trump controlled Republican Senate refused to vote on the legislation. The battle for police reform stalled when Senator Tim Scott, the only Black Republican in the Senate, proposed GOP-backed legislation as a counter.  Democrats felt the legislation was watered down and said it did not do enough to hold officers accountable for their actions and did not remove the cover of qualified immunity or create a national data base for tracking the actions of officers who instead of being reprimanded, disciplined, or fired from one police department, can now resign and then be hired in another jurisdiction without their previous actions being brought to light.

“Although we were not successful in getting the policing legislation passed into law last year, change happened throughout the country on a state and local level because of the outcry. The outrage was international. In every state in the country, people were protesting. People around the world were protesting. And all that momentum forced legislators to pay attention to this issue, and it was the first time in my lifetime that I ever saw public opinion changed,” Bass said. 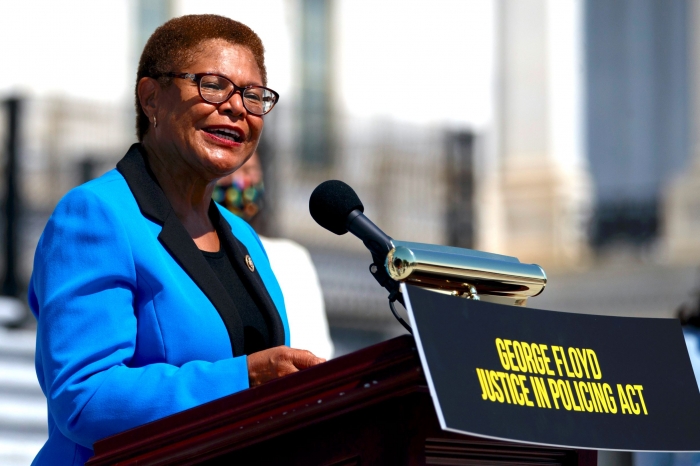 Local civil rights advocates around Los Angeles have been extremely supportive of the work done by Congresswoman Bass to bring forth this legislation.

“If we want to see real change, if we don’t want to see Black men and women killed on the streets by the police, if we want to stop the violence perpetrated on people of color by law enforcement, officers must be held accountable when they break the law.  This is all about accountability,” stated Charisse Bremond-Weaver, president of The Los Angeles Brotherhood Crusade.

Last Wednesday, May 18, leaders of the National Urban League, NAACP, and National Action Network, all came together for a press conference (virtual) urging Congress to pass the bill. They were joined by heads of the Leadership Conference on Civil and Human Rights, the Lawyers’ Committee for Civil Rights Under the Law, and several prominent women-led organizations.

On Tuesday, May 25, on the anniversary of George Floyd’s murder.  Floyd’s family came to Washington to meet with President Joe Biden, Vice President Kamala Harris, Congresswoman Karen Bass and other key legislators involved in negotiating the police reform bill.  While talks have currently stalled, overqualified immunity legislators are hopeful that a bi-partisan deal can be reached one year after Floyd’s death while in police custody which sparked worldwide protests demanding change.

In between meetings on Capitol Hill with Bass and other key congressional leaders, the Floyds also met with President Biden and Vice President Kamala Harris at the White House behind closed doors, in what the President and his staff called a “private discussion” with the family. 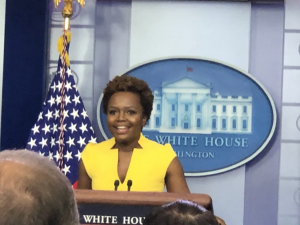 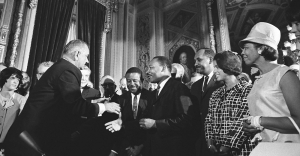 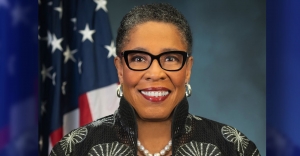