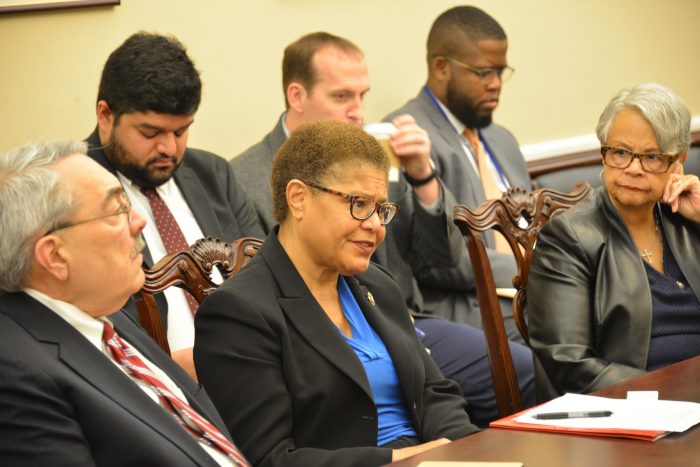 Since CNN’s International report exposed slave trading in Libya, Congresswoman Karen Bass and other members of the Congressional Black Caucus (CBC) have been among the many groups joining forces to bring about freedom and justice for slave trade victims. Recently, Bass provided the Los Angeles Sentinel with an update regarding her work on the front lines to end slave auctions in Libya.

Late last year, Bass and her colleagues wrote an open letter to the Libya Ambassador, Wafa Bughaighis, indicating their outrage and urging the Libyan government to “hold smugglers, traffickers, detention center guards, and anyone else involved accountable.” This resulted in the members meeting with Ambassador Bughaighis on Friday, December 8, 2017. The meeting led to an agreement between Bughaighis and the CBC that the country must immediately end slave auctions and forced labor.

“We met with the Ambassador out of the profound concern that in this day and age, people are being sold as property,” said Rep. Bass, second vice chair of the CBC in a statement. “The international community must operate on the assumption that we don’t need further proof; what we need is to stop it. The Ambassador has agreed to provide us a detailed update on the specifics of the Libyan investigation and will continue to work with us transparently to respond to the migrant and refugee situation. I look forward to the much-needed progress on this issue.”

To ensure a positive outcome from this agreement, the Congressional Black Caucus will continue to monitor slave trading in the country regularly.

Aside from meeting with the Libyan Ambassador to combat slave trading, Bass also introduced House Resolution 644. This bipartisan resolution condemns the migrant slave auctions in Libya and pressures the Trump Administration to develop strategies to rapidly respond to the refugee dilemma in the country.

Furthermore, it demands the Libyan government conduct an immediate investigation on the slave auctions that are currently taking place. Lastly, the resolution asks that the African Union conduct its own investigation into the heinous crime.

“Congress cannot sit idly by as news of the Libya slave trade spreads,” said Bass, top Democrat on the House Subcommittee on Africa in a statement. “Slavery is a crime against humanity. This resolution calls for a comprehensive response, both domestically and internationally, to this report, which is what we’ll need going forward to take an effective stand against this tragedy. Thank you to my colleagues for standing together against the heinous act.”

As we embark on a new year, Bass has taken a pledge to continue expanding her work in Africa and standing strong in her fight against ending the slave trading in Libya. For more information on the slave trade and the Libyan investigation please visit www.lasentinel.net and www.bass.house.gov