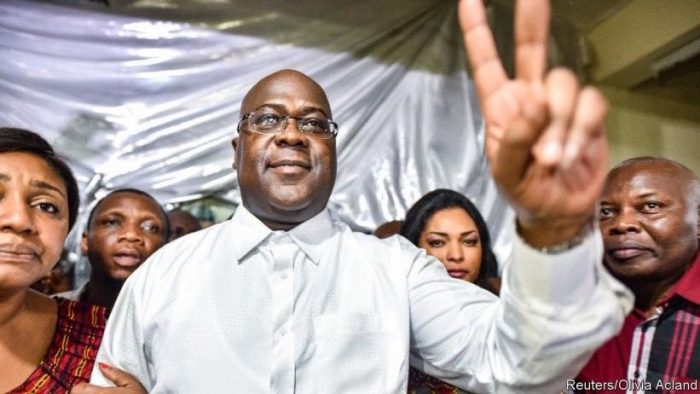 The Democratic Republic of Congo finally has a president. Opposition figure Felix Tshisekedi was declared winner of the presidential race by the DR Congo’s top court on Jan. 20.

The Constitutional Court said Tshisekedi had won by a simple majority, paving the way for him to take over from the current president, Joseph Kabila.

The outcome was challenged by runner-up Martin Fayulu who claimed that the election had been stolen and called on the international community to reject the results.

Election data leaked to some news organizations suggested that he won the vote.

“I ask the entire international community not to recognize a power that has neither legitimacy nor legal standing to represent the Congolese people,” he said of Tshisekedi, declaring himself “the only legitimate president.”

On Sunday, the Constitutional Court dismissed Fayulu’s claims as “unfounded” and said he had failed to prove any inaccuracies in the figures, describing his call for a recount as “absurd”. The ruling was not unexpected, with the court made up of Kabila’s allies.

Meanwhile, hundreds of supporters of Tshisekedi gathered outside the court holding placards saying “No to interference” and “Independent country” as riot police stood nearby.

Despite unconfirmed reports that members of Tshisekedi’s camp had strategized with Kabila before the votes were in, the greater part of Congolese seems happy with the “semi-victory,” as their main fears have been allayed, according to Israel Mutala, an analyst and editor in chief of the online news site 7sur7.

“Above all the Congolese feared a third term for outgoing President Joseph Kabila,” Mutala told the German news agency DW.

Observers from other international bodies, including the European Union and the United Nations Organization, complained of irregularities at the polls. The African Union, after initially expressing “serious doubts” about the outcome of the elections, seems more willing to go alone with the accepted candidate.

Speaking early Sunday, Tshisekedi said the court’s decision to reject claims of electoral fraud and declare him president was a victory for the entire country.

“It is Congo that won,” said Tshisekedi. “It is not the victory of one camp against another. I am engaged in a campaign to reconcile all Congolese. … The Congo that we are going to form will not be a Congo of division, hatred or tribalism. It will be a reconciled Congo, a strong Congo that will be focused on development, peace and security.”