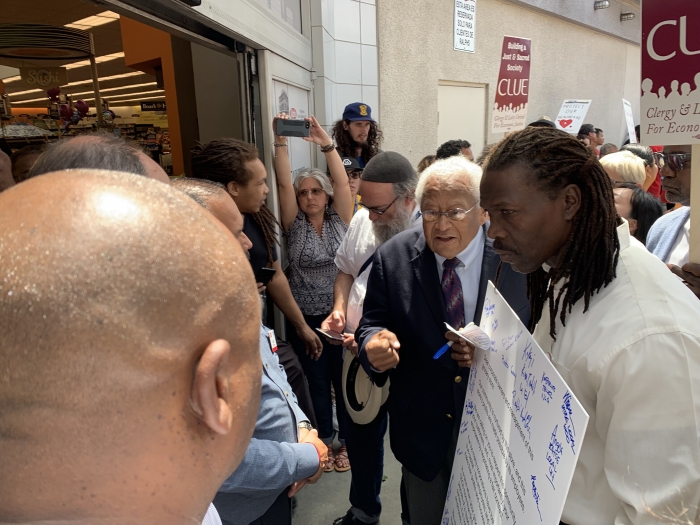 Elected officials, union members and community members July 9, gathered at Ralph’s grocery store in Los Angeles on Western and 7thstreets, to demand the corporations that own Ralphs, Vons, Pavilions, and Albertsons grocery markets, negotiate a fair contract. “Living Wage not Minimum Wage,” read some of the picket signs outside of the market as workers demanded a wage adequate enough for “one job” to sustain a living in the City of Angeles. The most recent contract, said workers, “offers slashed wages as much as 25 percent for checkers, offer less than one percent to other employees, eliminate some overtime, and put their healthcare benefits at risk of bankruptcy.”

“I work at the service deli and I work hard,” said Michael Rogers, a Ralph’s employee.

“We work all day. We’re with customers all day and when we go home, we have to worry about how we’re going to pay our rent. Every month the landlord comes to me and says, ‘you’re short.’ Why do I have to borrow money from my family to pay rent.

“Why do I have to ask somebody to loan me money so I can eat? Every time I ask for more hours they lower my hours. When I ask for more money they say they can’t afford it. I was hurt on my job and they didn’t even want to give me workers’ comp. I had to fight for it…”

“We must understand we are fighting plantation capitalism,” said Rev. James Lawson who spoke at the rally.

“Plantation capitalism says that a worker is property. A worker is not a human being. My ancestors were slaves under this idea. The corporations that control the grocery stores are rooted in this same ideology.”

Since then they said, roughly 60,000 grocery employees in Southern and Central California have been working without a negotiated agreement.

After 17 bargaining sessions, the corporate employers have failed to offer a fair proposal for their workers. Instead, grocery corporations have only offered less than one percent wage increase, threaten to cut cashier wages by nearly 25 percent, and put the healthcare plan at risk of bankruptcy.

Last week, the Los Angeles County Federation of Labor representing 300 unions and 800,000 members and their families, unanimously recommended to honor economic actions, including boycotts and a potential strike if employers fail to improve their contract proposals.

“We’re hoping for a fair deal for the workers who produce a profit for [these grocery stores, especially Ralph’s],” said Kathy Finn, UFCW secretary treasurer

“The reason we’re in this fight is because the workers of Ralph’s a Fortune 50 company and one of the most profitable companies in the United States, does not pay its workers a living wage. [Meanwhile], they’re giving their CEOs wage increases.

“These stores are part of our communities. It’s where the people go and buy their food to feed their families and yet the people who are working hard to provide them service can’t feed their own families.”

“We are committed to continuing to invest in our associates — providing secure, stable jobs with competitive pay and benefits,” said officials from Ralph’s corporate office via a statement.

“ We also need to keep our company strong. With a balanced approach this agreement can be a win for everyone — our associates, our communities and our company.”

“Los Angeles labor movement, hardworking women and men including nurses, teachers, firefighters, employees in the public sector, homecare workers, janitors, hotel workers, construction workers –them and their families– are standing with grocery workers and their fight,” said the president of the LA Fed, Rusty Hicks during the LA Fed strike sanction announcement. 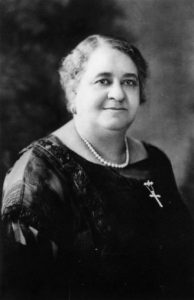