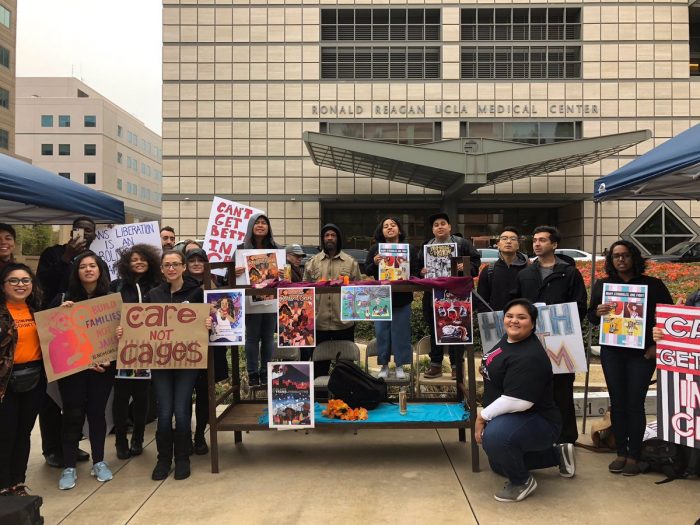 Locked buildings, cells and sheriffs providing security – sound like a Mental Health Center? It doesn’t, because it’s not. In response to Federal investigations of the poor conditions within LA County Jails, and the increase of imprisoned people with mental illnesses which has now reached 70 percent of the jail population, Supervisors of LA County planned to vote February 12th on a new “Mental Health Jail,” formally known as the “Consolidated Correctional Treatment Facility,” instead of diverting people who shouldn’t be in jail in the first place. Supervisors Mark Ridley-Thomas and Janice Hahn have now recently moved to reject the Mental Health Jail in favor of the “Mental Health Treatment Center,” amidst public outcry of concerns for human rights violations. However, there are concerns that the previous jail construction plans will continue on, now just under a new name.

Black people with mental illnesses are already overrepresented in our jails and prisons, and are the most vulnerable to being incarcerated due to the historical legacy of racism and societal oppression in this country. Almost a third of the L.A. County jail population is Black, many having mental health disabilities which the new facility is being constructed to serve. Proposal of the new “Mira Loma” women’s jail, also to be voted on by LA Supervisors on Feb. 12th, is believed to disproportionately impact Black women as well. LA County is already known for housing the largest jail in the world, and we cannot stand for the continued warehousing of community members who deserve dignity, better solutions and real care.

We are writing this as BEAM, a collective of Black counselors, community organizers, therapists, yoga teachers and healing justice practitioners dedicated to the wellness of Black communities here in Los Angeles and across the world. As professionals, we are all too familiar with the debilitating impact jails have on the mental health of members of our communities. Jails contribute to post-traumatic stress disorder, suicidal ideation, depression and accession of the symptoms of those already living with mental illness; which can include mania; and complex trauma. Jails are not an effective way to support our communities, especially the Black communities that BEAM works with. Many entities, including the World Health Organization, agree with this statement.

If we are truly concerned about human rights and dignity, a return to the old “mental asylums,” is not the answer in 2019.  Having the police, probation and corrections departments as a first point of access to mental health services only serves to further trigger our people to feel criminalized and prevents them from accessing the care that they need. In contrast to a jail, or even a large-scale locked mental health hospital, there is much research that shows that an investment in diversion programs coupled with community-based health centers, reentry services and mental health literacy can transform communities. This evidence shows that jail diversion services coordinated with community providers result in decreased time in jail and prison, fewer and later arrests, and increased global level of functioning for individuals with serious mental illness. These effective, humane, and even cost-efficient alternative solutions are easily within reach.

Supervisors, we urge you to make the right decision this Tuesday and go back to the drawing table, listen to your constituents, and utilize the vast array of organizations, leaders and researchers that are committed to doing the work to find alternative solutions that are social justice informed. The risk of the devastating generational impact on Los Angeles community members who are incarcerated and their families is too high, and we believe there is a better way forward. It’s time to create a new plan of care for LA County.

BEAM is a 501(c)(3) non-profit organization. Our mission is to remove the barriers that Black people experience getting access to or staying connected with emotional health care and healing. We do this through education, training, advocacy and the creative arts