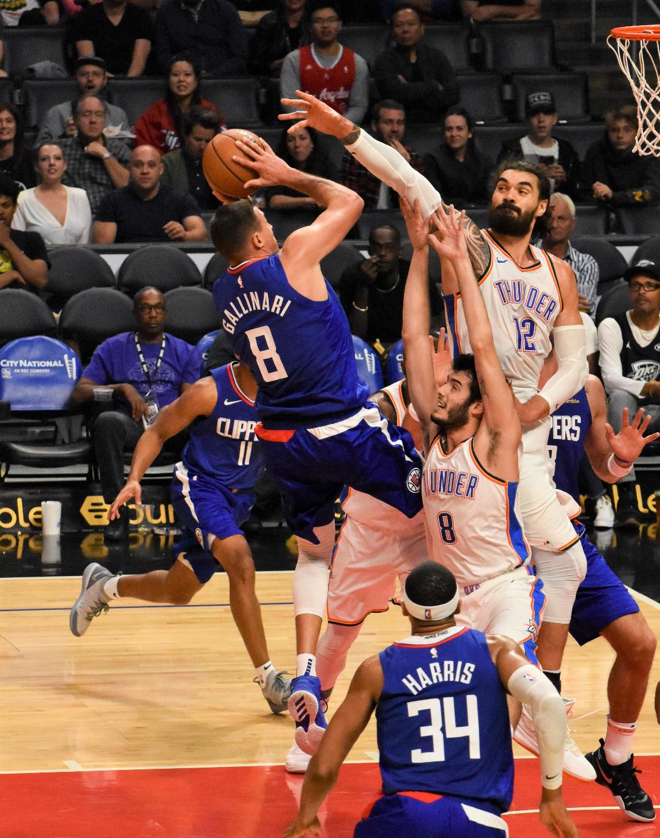 Looking to get their first win of the season, the Los Angeles Clippers (1-1) defeated the Oklahoma City Thunder (0-2) 108-92, at Staples Center on Friday night thanks to a flurry of runs in the first and fourth quarter.

Tobias Harris and Danilo Gallinari scored 26 points each for the Clippers, as they combined to shoot 50 percent from the three point-line, making six-out of-12 attempts.

“It was a relief for us [as] a team, especially in the locker room after the game just to get our first win with an aggressive effort tonight,” said Harris.

Lou Williams, who was last season’s Sixth Man of the Year, added 17 points off the bench, while Boban Marjanovic scored 10 of his 13 points in the final quarter.

Los Angeles came out of the gate firing on all cylinders with a 16-0 lead to start the period, and looked as if they would be cruising to their first victory of the year while Oklahoma City missed their first six shots of the night.

“We got off to a great start, our starters in the first half were phenomenal,” said Clippers head coach Doc Rivers.

However, the Thunder then went on to put together a 46-32 run of their own, cutting the Clippers lead down to only to only two points at halftime, [48-46].

Oklahoma City continued their momentum and outscored Los Angeles 31-23 in the [third period], holding their largest lead of the game 65-56, with 7:28 remaining in the game.

Although Los Angeles seemed to be out of sync in the second and third quarters, the Clippers outscored the Thunder 37-15 and completely clamped down Oklahoma City, holding them to only five made field goals compared to Los Angeles 12 made shots in the [fourth quarter].

“We’ve got to execute better, we’ve got to run offense, and we’re not going to be able just to rely on guys just trying to create and manufacture shots,” Thunder coach Billy Donovan said. “We have to do it together.”

Paul George led the Thunder with 20 points, but it came on a night where he was 7 of 27 from the field, also fouling out with 1:13 remaining in the game.

Steven Adams added 17 points and 18 rebounds, as he played a huge role in the Thunder control the rebound margin, (52-47).

“They made it a hard night for [Paul] George,” added Rivers on the defense of Avery Bradley and Luc Mbah a Moute chasing the Thunder’s star player.

Russell Westbrook missed his second consecutive game while recovering from offseason knee surgery and was sorely missed all over the floor.

George knew that he would be counted on by his teammates even more without their MVP and acknowledged he has to prepare his team to win close games.