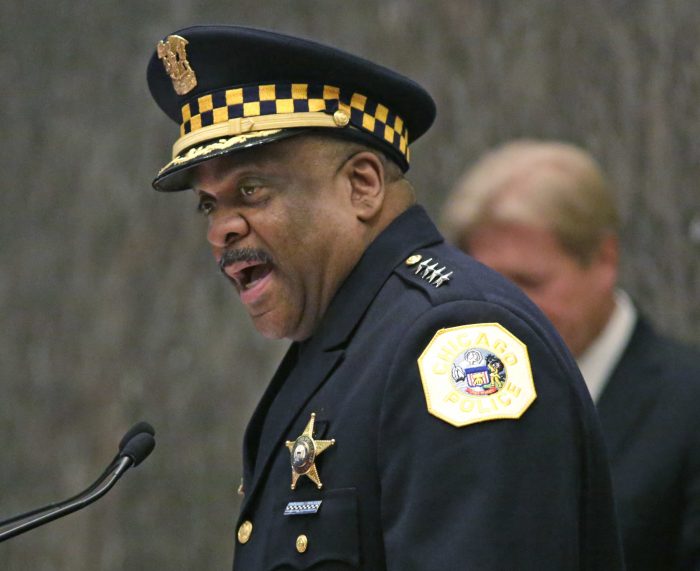 FILE – In this April 13, 2016, file photo, Eddie Johnson, left, speaks after being sworn in as the new Chicago police superintendent in Chicago. Superintendent Johnson says he will recommend the firing of seven officers involved in the Oct. 20, 2014 shooting death of black teenager Laquan McDonald. Superintendent Eddie Johnson said Thursday Aug. 18, 2016 he was accepting the recommendations of the city’s inspector general who concluded that the officers filed false police reports. (AP Photo/M. Spencer Green, File)

CHICAGO (AP) _ Seven Chicago police officers should be fired for filing false reports in the fatal shooting of black teenager Laquan McDonald in 2014, the police superintendent said Thursday, in a move aimed at repairing the reputation of a department dogged by decades of cover-ups and scandal.

The release last year of official police reports that directly contradicted video evidence of McDonald’s shooting by a white police officer turned a spotlight on longstanding concerns about a “code of silence” in Chicago’s police force, in which officers stay quiet about or conceal possible misconduct by colleagues.

Superintendent Eddie Johnson said in a statement Thursday that after reviewing documents, video and other evidence, he was accepting the recommendation of the city’s inspector general to fire seven officers because of their accounts of the incident.

The officers violated Rule 14, which prohibits “making a false report, written or oral,” said Johnson. He did not name the seven officers.

Johnson will take his recommendation to the city’s police board, which will make the final decision. The process typically takes about seven months, so any decision to fire the officers isn’t likely until next year.

Johnson became the superintendent after Mayor Rahm Emanuel fired Garry McCarthy because of the McDonald shooting video and his recommendation marks the single biggest decision he has made for a department long dogged by suspicions that it condones or covers up the brutality and misconduct of its officers.

Dean Angelo Sr., the head of the Chicago police union, defended the officers. He said their interpretation of what unfolded may have been accurate from their perspective, noting that perceptions can be affected in high-stress situations, like shootings.

“That’s what humans go through,” he said. “And contrary to popular belief, police officers are human beings.”

“I think Eddie Johnson gets it. He gets the crisis that we are in and how to solve it,” said Jedidiah Brown, a leader of a group called Chicago Life.

Thomas Gradel, a co-author of Crime, Corruption and Cover-ups in the Chicago Police Department, a 2013 report published by the University of Illinois at Chicago, said the recommendation that so many officers be fired was unprecedented in the city and a step toward real reform.

“I don’t see how they can change back to the way things were before,” he said.

Johnson’s decision stems from a scene captured on dashcam video taken in October 2014 in which Officer Jason Van Dyke can be seen firing 16 times at McDonald, including when McDonald was on the ground. The release of the video the next year _ on the orders of a judge _ sparked days of protests, an investigation of Chicago police practices by the U.S. Justice Department and promises of reforms by Emanuel who found himself scrambling to restore public confidence in his office and the police force.

Prosecutors filed first-degree murder charges against Van Dyke, who has pleaded not guilty.

The subsequent release of police reports raised serious questions about the accounts of other officers at the scene, which contradicted what was on the video. As investigations into the incident continued, a judge took the rare step of appointing a special prosecutor to examine the actions of officers who were at the scene.

Included among hundreds of documents that the city has released are officers’ accounts describing McDonald menacingly advancing on police and waving a knife threateningly at them right before Van Dyke fired.

Van Dyke’s partner, Joseph Walsh, told an investigator he repeatedly yelled “Drop the knife!” at McDonald and backed up as the teenager advanced at the officers. Further, he supported Van Dyke’s claim saying McDonald “swung the knife toward the officers in an aggressive manner” and that he believed McDonald was “attempting to kill them.”

Another wrote that, Van Dyke “in defense of his life … backpedaled and fired his handgun at McDonald.”

Multiple officers wrote that, even after McDonald had been shot, he still posed a threat.

“McDonald fell to the ground but continued to move and continued to grasp the knife, refusing to let go of it,” one report reads.

But the video belies those accounts.

In it, Van Dyke is seen stepping from a squad car and shooting almost immediately. After one or two shots, McDonald collapses, barely moving except for slight twitches as bullets pummel his body. Court filings by prosecutors say all but a few of the 16 shots hitting McDonald were fired over 13 seconds as he lay in the street. Prosecutors say the 3-inch blade was found folded into the handle.

The inspector general’s report centered on the actions of 10 officers, including the seven whom Johnson says should be dismissed. Two of the officers cited in the report have since retired. Johnson said he disagrees with the recommendation to fire an eighth officer, saying there was “insufficient evidence to prove those respective allegations.”

Angelo said the seven officers must rightly wonder if the police board will listen to them defend their actions that night given months of protests against police in Chicago and other U.S. cities.

“How comfortable are you that you are going to get a fair shake?” he said. “No one stands on the side of policing right now.”