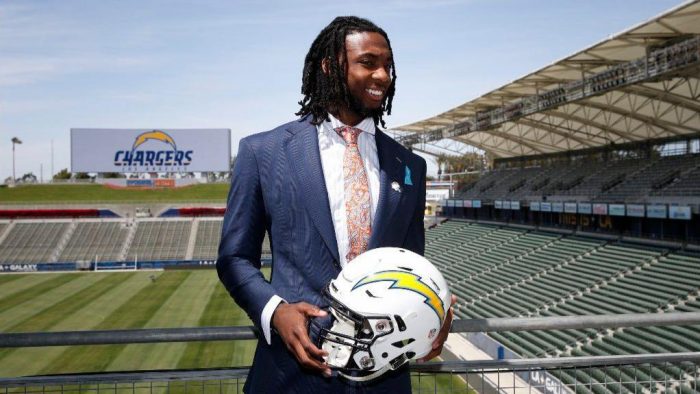 Inside the ESPN Zone in Anaheim last Thursday evening, a packed crowd of Los Angeles Chargers’ fans and current and former players, erupted and immediately began texting and talking on cell phones once the newest addition to Bolt nation was “chosen” in the first draft class since the team’s move from San Diego to L.A.

Cameras cut to Mike Williams, the second wide receiver to be taken in the first-round of the 2017 NFL Draft.

“When I got the call, the call fell at first so I had to call them back,” Williams said of the moment surrounded by family and friends in Vance, South Carolina. “They told me that they selected me in the first round, you know. It was an exciting feeling; my family went crazy and it was amazing.”

“I love the pick,” said Coach Lynn.  “He put in a lot of work, we liked him and he was number one on our board, so I’m glad we could get him.”

Williams, a 6-foot-4, 218 pound wide receiver has put together quite the collegiate resume finishing his Clemson career third in receiving touchdowns in school history (21), fourth in receiving yards (2,727) and fifth in receptions (177). Battling back from a neck fracture injury, Williams was forced to redshirt his junior year, ending his 2015 season. He returned in 2016 to help Clemson win the national collegiate championship and in the process earned first-team All-ACC and second-team All-American in 2016.

“There were a lot of players we were looking at, at the number seven spot,” Coach Lynn said. “It wasn’t just necessarily targeting a wide receiver, Mike was the best available on our board.” 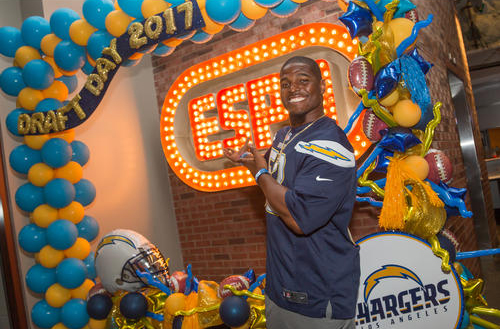 After overcoming the neck fracture, Williams’ return to help Clemson win the national championship touted well for his draft stock.

“You can’t have enough playmakers and he made plays all throughout college,” said Coach Lynn on Williams. “I love the way he competes. I love all his intangibles.”

The Chargers were on the clock with a number of formidable players available, including Alabama defensive lineman Jonathan Allen and Ohio State safety Malik Hooker.

Multiple scouting reports project that Williams will be a high-volume target for veteran Chargers’ quarterback Philip Rivers by working the middle and of course the end zone. Williams knows that it will not be an easy road, as he approaches his first NFL game and season but nonetheless is looking forward to putting in the work and stepping onto to the field as a pro. 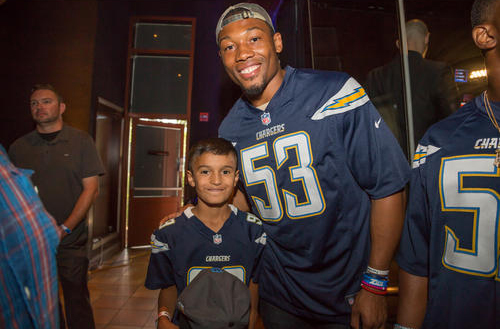 “You hit the ground running … there’s really no breaks, so the only thing you can do from this point is get your mind right, get in the best shape and be ready to learn,” said Chargers’ linebacker Joshua Perry, who was also in attendance for the Chargers draft party. “Know that it’s going to be a tough year, but just keep in mind all the things that you did that got you prepared for this moment and try to go back to those things to help you,”

Perry, a fourth-round draft pick out of Ohio State says it was advice like this from fellow Chargers’ teammate Manti Te’o that sustained him through his rookie season. Now heading into his second NFL season, Perry emphasized leaning on the veterans to navigate a new city, a new team and the next level of competition..

“I’m looking forward to learning the new system,” said Williams after being drafted. “You have to know what you’re doing before you go out there and actually do it.”

Williams should have no problem fitting in with the look of an NFL wideout, his physicality ability to make athletic plays on the ball should make his journey as a top rated receiver on the Chargers a swift one. Williams’ is focusing on building a relationship with his veteran quarterback. 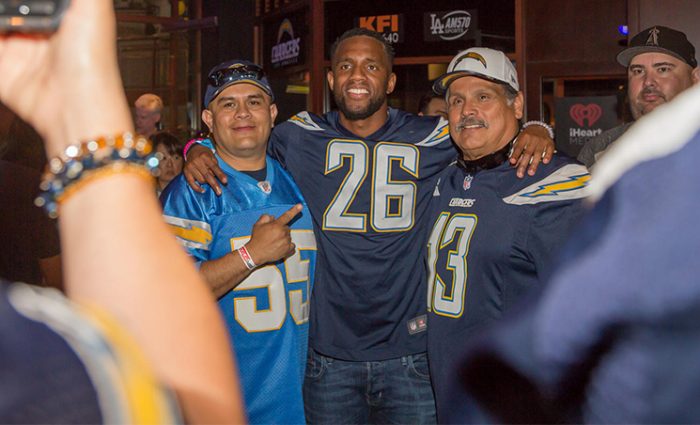 “He is a great quarterback; he’s a Hall of Famer,” said Williams. Rivers has relied heavily on his star-studded receiving corps in Keenan Allen and Travis Benjamin. Last season, however, the injury bug affected both Allen and Benjamin’s season, ending with knee injuries that decimated the receiving corps.

“Keenan on the other side is just something I look forward to,” said Williams on where he fits into the offense. “I’m looking forward to getting with him, learning from him and just having fun.”

Williams is the third Clemson wide receiver selected in the first round of the draft since 2013, following Bills’ Sammy Watkins and Texans’ DeAndre Hopkins.

The Chargers seemed to have addressed several looming issues with this draft on both sides of the football. The second day of the draft for the Chargers focused on the offensive line, adding Western Kentucky guard Forrest Lamp and Dan Feeney, guard from Indiana. The final day was all about addressing the defense, adding safeties Rayshawn Jenkins out of Miami and Desmond King of Iowa, along with Notre Dame product, defensive tackle Isaac Rochell.

Perry summed it up best….“We have a new city and a new market, so that’s another great opportunity. It’s just another year with a clean slate.”